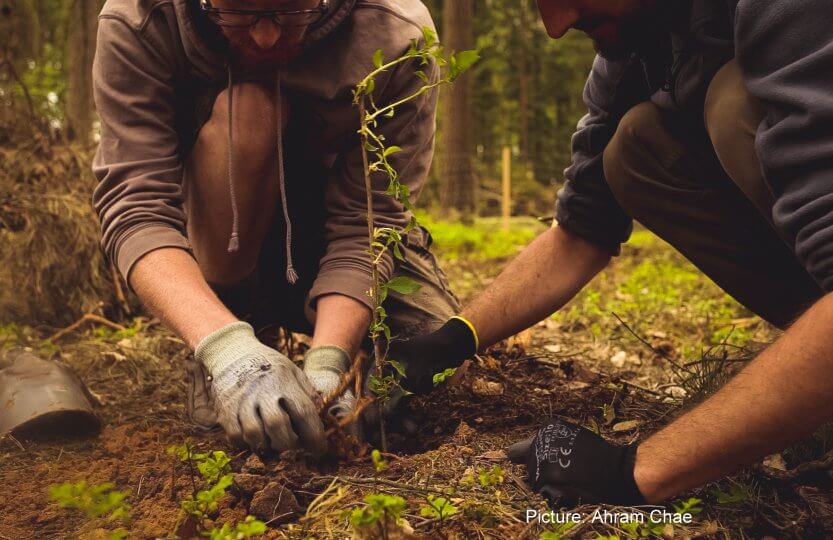 „I feel responsibility for the project”, Kun Woo Ro says. He is sitting in the Asia section of the Ecological-Botanical Garden in Bayreuth, on a bench surrounded by blooming Rhododendron bushes. Yellow, orange and pink flowers are turning this part of the garden into a colourful idyll. The project he is talking about is “Klimawald Bayreuth”. To explain it in a nutshell: Volunteers planted tree species that are more adaptable to the future climate in a forest area in Bayreuth. It took place from 24th to 26th April, one month ago – now, it is time to reflect.

“In those three days, 245 people have helped us to plant 4719 saplings”, Kun says. The 28-year old GCE student from South Korea had the idea for Klimawald already last year. “I wanted to something on the ground together with my fellow students. To have a good time and plant trees somewhere in Bavaria.” As trees (and plants in general) work as carbon sinks, because they absorb CO2 through their leaves, this would contribute to reducing our carbon footprints. As GCE students travel quite a lot due to conferences, internships and science schools, Klimawald was intended as a compensation measure for this study programme.

He proposed his idea in a project management seminar. First, Nikunj Pathak from India and study colleague of him, wanted to help in the project. “He suggested Bayreuth as a suitable location for this project. Seminar leader Birgit Thies suggested us to have at least one German speaking student in the group as this would make communication with local authorities easier.” At this point, GCE student Theresa Landwehr joined the team for the Klimawald project. Gregor Aas, head of the Ecological-Botanical Garden in Bayreuth (ÖBG) also supported the students with his knowledge.

After various attempts to contact different city departments of Bayreuth, finally the Office for Food, Agriculture and Forestry Bayreuth (AELF Bayreuth) and the City Forestry Bayreuth (Stadtförsterei Bayreuth) showed interest in participating. “Before our first meeting with them, we were not sure how much land we would get. Normally, the landowners use it for timber production and other forestry activities”, Kun, who is originally coming from South Korea, says. The experts from AELF and Stadtförsterei proposed a forested area of one hectare and thousands of saplings. “This was very unexpected, and we were really happy about it. From this point on, there was no way back, we had to do it”, Kun says and laughs. The landowner of the forest area, Hospitalstiftung, agreed with the plans to plant species adapted to climate change.

As a next step, the team had to agree on a date when the Klimawald project should take place. “We had to make sure that students would be back from the semester break. Also, we had to take into account a suitable time for planting. Late April was not ideal, but students were back then”, Kun says. On the site, some older trees got cut down in order to lower competition for the new saplings. “Normally, the most common tree species to be found in this region are pine and spruce. Both species have suffered during the last years due to heat stress, bark beetle outbreaks, storms and droughts”, Kun says. Also, a fence was set up around the site to prevent wildlife from eating the saplings.

When it came to decide which species to plant, the opinions of experts from the city and the county were different from the students’ ones: “They wanted to stay at a scenario with 2°C warming and plant beeches and oaks, which are local native species. But we from the university thought a bit differently, as the average temperature in Bayreuth has already risen by 2°C. Gregor Aas therefore suggested some non-native species which we could merge with the ones proposed by AELF and Stadtförsterei. For example, Turkish hazel and Douglas fir, Turkish and Sicilian firs, and Lebanon cedar as they are more drought tolerant as well as adapted to extreme winters.”

A little smile hushes over Kun’s face as he remembers the workload of the project. “There was so much work involved I hadn’t even thought of. We had to design a website, a logo, organize drinks and food to give to the volunteers. Thankfully, my girlfriend Ahram Chae (Bauhaus-Universität Weimar) joined our team at some point as the designer for the website.” Such projects often bring unexpected turns: During Klimawald, various media teams arrived, interviewing the students – most of all focussing on Theresa as she is the only German speaking team member. “This was really hard for her and we hadn’t thought of this problem before”, Kun says.

In the end, it was worth the effort. People with very different backgrounds and from all age groups participated: high school students, students from various departments of the University of Bayreuth, parents with kids, some professors, parents without their kids. “Even high school students from Bamberg came to plant trees, I heard that the Fridays for Future movement is quite strong there.” Another interesting side fact: around two thirds of the volunteers were women. “This is something, I see often in this field. More women are involved in environmental issues”, Kun says.

What is preoccupying Kun now, one month after the event, is the impact of the planting. “One hectare is nothing.” The forest area in Germany is around 11.4 million hectares and stores 52 million tonnes of CO2 per year. Therefore, the one hectare used for Klimawald accounts for around 4.5 tonnes of stored CO2 annually. Just to compare: Germany emitted 905 million tonnes of CO2 in the year 2017.

“I would like to extend the project, maybe introducing it in other cities, other universities as well”, Kun says. For the next five years, the Klimawald project is going to be continued in Bayreuth. “There will be a planting phase next spring. If it is needed due to droughts, the new trees will be watered once in summer. This is something new in forestry, normally, the plants are let alone.” Probably a “gap filling” is needed in October this year, as the beech saplings were of bad quality and some are likely going to die. This means, that new trees will be planted to replace the dead ones.

Is the result of Klimawald satisfying? Kun thinks for some moments and answers: “My character does not allow me to feel too much self-esteem, but with Klimawald, I was really happy and satisfied. It was a big dream of mine to plant trees for a long time.” His decision to study ecology was inspired when he read a book with the title “The Man Who Planted Trees” by Jean Giono some years ago. “This was something so simple: To plant trees and see change”, he says. And yet, Kun was not satisfied with just leaning over science books, reading through scientific papers and similar aspects of academia. “I started to lose the simplicity of action. Obviously, studying and gaining knowledge is important but I didn’t actually do anything with it yet.” Therefore, Kun decided to plant trees.