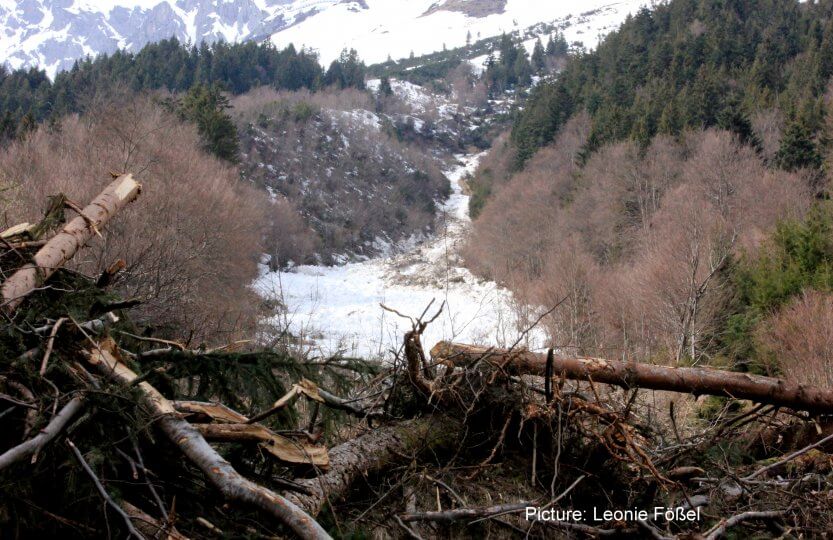 Like matches fallen out of their box, massive trees are sticking out the dirty masses of snow that cover the ground. It is as if a giant had played Mikado on the steep slope of the mountains. Debris, snow and ice chunks, trees and bushes – it looks like in an apocalyptic film. But it isn’t. It is very real, within one’s reach. A massive avalanche slid down the Nordkette, a northward oriented mountain chain in Innsbruck, Austria. The small mountain hut Arzler Alm has been spared, which is a miracle as both sides of the hut, the debris flow left pure destruction.

“This is one of the avalanches returning most frequently at this site”, Walter Gebhard says. He is head of the Wildbach- und Lawinenverbauung Tirol, a section of the ministry for environment and tourism in Austria working on avalanche protection. “There are around 2600 avalanche sites in Tirol, we know that they occur frequently there.” They do not occur every year but in varying intervals of time, depending on the location. “Some have a higher release, others are rarer”, Gebhard says. This year alone, 400-450 avalanches have been documented in the county of Tirol. Avalanches are part of the mountains, the people living there are used to this disturbance. Yet, it is a natural hazard which has to be dealt with. Avalanches often are triggered when high temperatures occur in spring.

In a future not too far away, it is very likely that natural hazards such as avalanches will increase in mountainous areas like the Alps. The reason: global climate change. While the Paris Agreement aims to restrict global temperature rise to 1.5° (or as this is very unlikely to be reached below 2°C), the Alps already face this rise in temperature in some regions. Very likely, these temperature changes will bring some drastic challenges to the Alps. They will seriously impact the lives of people living in that region as well as biodiversity, wildlife and environment in general. Therefore, the Alpine Convention has been founded in 1989 by the neighbouring countries of the Alps (Germany, France, Italy, Liechtenstein, Monaco, Austria, Switzerland and Slovenia) as well as the EU. The Alpine Convention aims to generate sustainable development and protection of the Alps. The Permanent Secretary of the Alpine Convention is in Innsbruck, while the presidency of the Alpine Convention changes every two years.

Squeezing his eyes in the sunlight, Walter Gebhard looks into the clear sky. “Today, we have perfect weather conditions, nobody would expect avalanches when standing in the green areas where the snow has melted.” And yet – they crawl down the mountains like a howling monster, destroying everything that is in their way. In order to protect the people in the Innsbruck area from avalanches coming down the steep mountain chain, various measures are installed.

Firstly, there is a wall of cement which was built in the 1950-60s. Since then it has been renovated and improved several times. Another approach is to release avalanches artificially. Here, small avalanches are triggered helping to avoid big avalanches. “This approach has grown in the past 20 years. It is especially useful for protecting highways and skiing areas”, Gebhard says. This is done via targeted detonations – a huge knowledge base is necessary. “An early release is important. The detonation takes place 1-10 meters above the snow, it is not located directly in the snow”, says Gebhard, looking up the mountain. Over settled areas, the artificial release of avalanches is not allowed as this has caused accidents in the past when avalanches grew bigger than it was expected. Warning and monitoring systems that include the local population and their knowledge are as well a very helpful tool.

Ever since people started to live in the Alps, natural hazards have been part of their life. Due to a changing climate, these hazards are now even more threatening as they are increasing in frequency and becoming less predictable. With extreme events like storms or floods, climate change is putting a heavy weight onto the shoulders of the people living close or in the mountains. If they want to adapt to the new situations and problems, they have to come up with sustainable and adaptable solutions. And it is very likely that they want to adapt – because who would like to see their house buried under trees and snow?