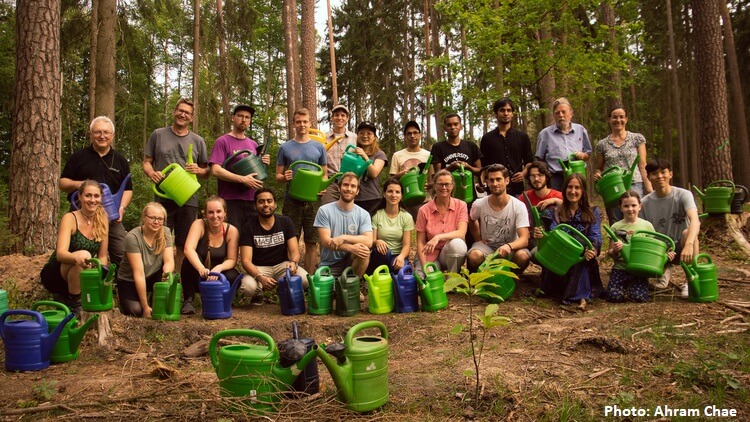 Blauer Kompass is a competition hosted by the German Federal Environment Agency with the aim of honoring projects which address the consequences of climate change. Winners receive press coverage and publicity. This year’s competition received over 160 applications for three different categories: private and municipal companies, research and educational institutions, and associations and foundations. There was an audience award which recieved over 20,000 votes from the public and the three remaining awards were granted by a jury which selected a winner from each of the three categories.

Klimawald Bayreuth won the award in the category for research and educational institutions!

Klimawald Bayreuth is a project that was initiated by students from the MSc Global Change Ecology program at the University of Bayreuth. In April 2019, three founding students with the help of roughly 250 volunteers planted over 4,500 trees in a forested area in Bayreuth which had been damaged by storms and drought. Fundamental concepts of the initiative include that planting these trees strengthens forest resilience to climate change, increases carbon sequestration, and promotes biodiversity.

In 2020, a new generation of MSc Global Change Ecology students joined the existing Klimawald leadership team to organize follow-up events including watering the planted trees and an educational excursion, “Wir entdecken den Klimawald,” which happened during Wandelwoche in October 2020. The Klimawald Bayreuth forest project is now used by a network of various interest groups including researchers, forest practitioners, and the local population. Excitedly, the project has inspired implementation of similar projects, for example, in the Höxter Climate Forest and Arisu Climate Forest Project South Korea.

Reports on the planting campaign in the media: