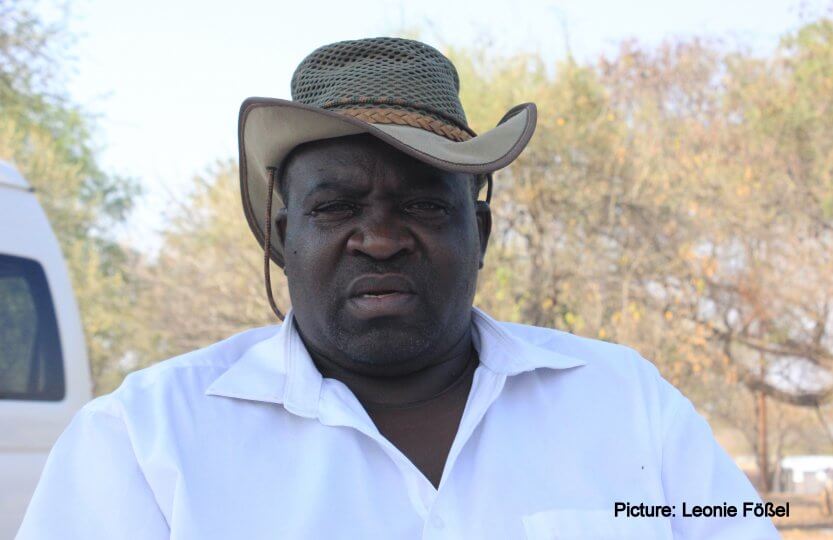 As mentioned in one of our articles about the study trip to Namibia, we had the chance to talk to John Kasaona, executive director of Integrated Rural Development and Nature Conservation (IRDNC) in Namibia. This organization wants to “link conservation to the social and economic development of the people who live with wildlife and other valuable natural resources”. During our research stay in the Wuparo Conservancy, far up in the North-Eastern part of Namibiay, my research group focussed on the question whether the conservancy – in our case the Wuparo conservancy – improved the living conditions for the local people and whether the management strategy improved nature conservation and biodiversity. Therefore, John Kasaona (47) was one of the central figures for our expert interviews – but we also talked to people living in the Wuparo conservancy and to tourists to get a broader picture. Even though John Kasaona does not come from the area, he knows the Wuparo conservancy quite well and can compare it to other conservancies all across Namibia. Sitting in plastic chairs in the shade of one of the large trees of the Wuparo conservancy’s garden, John Kasaona gives me the answers to the questionnaire.

How do you feel about the progress of the conservancy?

John Kasaona: Comparing the Wuparo conservancy to others, I think they are doing well. They have a structure and are quite well organized. I hope changes in the constitution will lead to a spread of knowledge to the new committee members.

How is the status of the management plan of the conservancy?

John Kasaona: Speaking about conservancies in general, their success always depends on the layout of the area (editor’s note: this refers to the environmental surrounding and conditions) which determines the setup of the management plan. It is important to check where people use the land for agriculture, tourism, cattle etc. It is also important to sensitize people for the use of the land. In Wuparo, there is little space for livestock – and farmers depend on this space. Therefore, a flexible management is necessary, also in order to adapt to climate change. With flexible I want to say that they should adapt to altering situations and nothing should be gravelled in stone. The conservancy should help people to fulfil their needs.

Does the conservancy receive any subsidies? If yes, from whom and are they sufficient?

John Kasaona: We (editor’s note: IRDNC) were supporting conservancies here in the North: 30 in the Kunene region and 16 in the Caprivi region. Since 1997, we were helping the communities with their management, with committee elections, human-wildlife-conflicts and tourist accommodation. We were carrying them from the very beginning. Since a couple of years, these conservancies are financially independent.

What is the next step in or for this conservancy?

John Kasaona: People look at conservancies like they look at a president: They expect that their lives will change, they expect that all social needs will be solved with the help of the conservancy. This is impossible – you would need an ideal area for that. As a next step, I think it is important that the conservancy covers access to water, electricity, animal vaccination and education. Once this is done, the conservancy should look at the households and try to help the most vulnerable ones, as they must benefit the fastest as possible.

Do you think the people living here benefit from the conservancy itself?

John Kasaona: It depends on what you see as a benefit. We can’t reach everyone but there is a change as we are creating a platform for talking about conflicts with wildlife and for raising awareness for conservation. Also, there is more employment, e.g. in the lodges, the campsite, in hunting and in the office of the conservancy. So, not everyone benefits but in general there is improvement.

Do you think the health education situation (e.g. AIDS) has changed since the establishment of the conservancy?

John Kasaona: This was part of our education programme from IRDNC. We were talking about how a healthy environment is connected with a healthy population. Conservancies became unknowingly a platform where different NGOs and parties from the government came to. People could talk about their problems. Thus, there were indirect improvements in the health situation.

Do you think the infrastructure in this area (e.g. medical aid, schools, roads, shops) has improved since the establishment of the conservancy?

John Kasaona: Indirectly, yes. In conservancies, we encourage rural democracy. It was our approach to teach people to stand up for their wishes and demands. The communities start to know about their rights. All those things like medical aid and schools came here because the voice of the rural people got out. Remember: Conservancies are not only for wildlife but also for people.

Do you see any necessity for more research in the conservancy area?

John Kasaona: Why not? Looking at human-wildlife-conflicts and ways to mitigate those conflicts is important. Conservation related research would be good. Living with wildlife is not easy – I think, research could help a lot here.

Is tourism an important factor in this conservancy?

John Kasaona: Yes, it’s a key factor! The financial sustainability depends on tourism here. Without tourism, there would be nothing for the community.

Which kind of tourism is most prominent in this conservancy?

John Kasaona: Organized tours bring most income because they have certain routes they always take. (Editor’s note: Many tourists stay in the lodge which is situated in the conservancy. The owners of the lodge pay money to the conservancy because it is the land of the local community.)

Which role does trophy hunting play in this conservancy?

John Kasaona: Trophy hunting depends on the abundance of big game like elephants or buffalos which bring most money (editor’s note: The Namibian government gives so called “quotas” on how many animals can be hunted. The hunting tourists pay a given price to the conservancy for the animal they want to shoot ). What I see as a problem is targeting big bulls – especially regarding elephants. Shooting old bulls that will die soon is not so much of a problem – but how many do remain? (Editor’s note: killing bulls leads to a smaller genetic pool) Baby elephants and female animals shouldn’t be killed either. Therefore, hunting guides need to be very comprehensive. They shouldn’t actively target breeding ones and not kill all the bulls.

Could the conservancy survive without trophy hunting?

John Kasaona: Yes, because we have to be very adaptive and look at alternative ways of income generation. The use of the devil’s claw could be an idea. (Editor’s note: Devil’s claw is an indigenous Namibian plant which is used for treatment of arthritis and rheumatoid arthritis.)

Did the number of tourists increase since the establishment of the conservancy?

John Kasaona: Overall, the tourist numbers have increased. In the conservancies, land and wildlife became protected – people are coming to see this.

What influence does trophy hunting have on the local population?

John Kasaona: The population benefits economically as money is generated by trophy hunting.

What could be improved in this conservancy?

John Kasaona: I think that some administrational points could be improved. Also, the distribution of natural resources should be more equal.

Do you think the traditional lifestyle has changed since the establishment of the conservancy?

John Kasaona: Well, life is changing with new technologies anyways. There is lots of influence and people are exposed to changes and challenges. People also go to other areas and see new things. So, yes, it could well be that the lifestyle has changed.