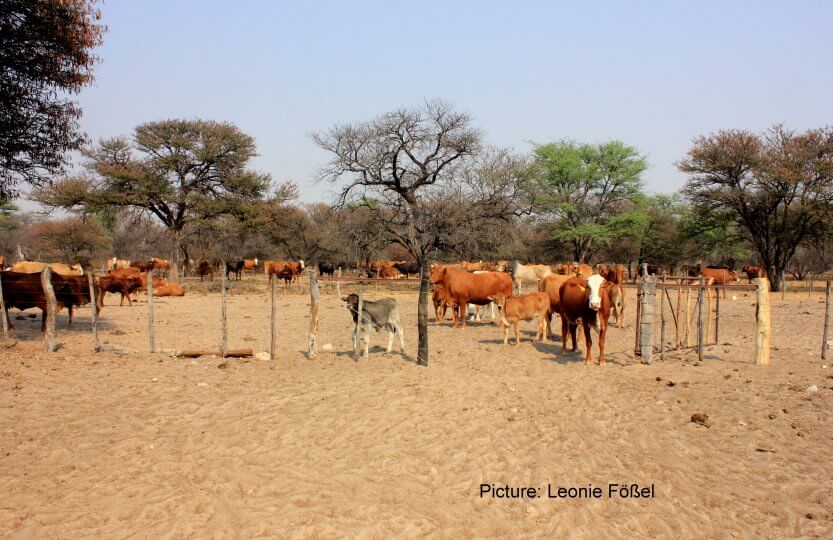 The smell of goats and cows fills the dusty air. Their bleating and snorting accompanies the slowly setting sun, which moves like a red fire ball towards the horizon. A loud “Moo” breaks the idyllic atmosphere. Georg Vermaak, who introduces himself as “Org”, folds his arms in front of his chest and lets his gaze wander contently over the land. His land, to be specific – 5000 hectares of Namibian farm land. Just enough to feed his 300 cows. “Here, every cow needs about 17 hectares of land for grazing”, Org explains. “We don’t have a lot of biomass. Therefore, we need more land for our cows compared to other places.” The farmer is a very tall man, with large hands and knees, his skin is tanned from the beaming Namibian sun. His dog Nonnie, a huge black boerboel, sits at his feet, nudging his hand for attention.

Being a farmer in the dry country in southwest Africa is a tough job – but also one which can provide a quite good life. “I have nine people permanently employed at my farm, they come from the next village, all of them are bushmen”, Org says. “Bushmen” is an old colonial, but still often used, term that refers to members of the indigenous tribe of the San people. The nine employees and their families, all together more than 50 people, are allowed to live on Org’s farmland. Per month, they get the minimum wage of 1400 Namibian dollars – about 80 Euro. That’s a normal salary for farmworkers, the minimum wage is set by the Namibian government. Org also provides housing for his workers, who deal with all kinds of tasks that accrue at the farm: They bring fodder to the cows, fix fences, control the herds and also check for wildlife that could be a threat to the cattle. Lions and leopards, for example. “In 2012, there were 14 leopards on the farm that I had to shoot as they were attacking my cattle”, Org says. But that was an exception, normally, in two years he has one leopard on his land. Then, he proudly points at two padded leopard heads – 2 of the 14 unfortunates – that are now having a special place on the wall of his living room. A trace of sorrow shadows his face, however. “It is a pity to kill these beautiful animals”, the tall farmersman says. Then his features harden: “But if they kill my cattle, I have to kill them.” If he or his workers discover traces of lions or leopards on the farm, he usually waits a while to see if the animals leave the area by themselves, Org says. If it doesn’t leave and kills cattle, the farmer is allowed to shoot it – but he has to report about it to the authorities within 24 hours time. But when it comes to his cattle, he can’t take a joke. The life of a farmer here in the hot, dry Namibian East is already challenging enough.

“We are facing huge changes in biomass that are related to the weather”, he says, shielding his eyes from the sun with his hand, while he opens the gate to one of the corrals. In order to have enough water for his cattle, he pumps it from the close-by borehole to the fenced corrals. In the warm season, one cow drinks up to 40 liters per day; during rainy season only 20 liters. “In some years, we have too little water and biomass available at the farm”, Org says. “What we do first, is to reduce the number of cattle.” If this doesn’t help, he has to buy additional fodder which is expensive. Unlike in Germany, Namibian farmers don’t get any subsidies from the government. In case of extreme droughts or flooding, the farmers are on their own and have to face the challenges without any help from outside. And drought is an often-seen companion in the southwest African country indeed. According to Org, in former times, when his father was still running the farm, there were subsidies though. He seems to be upset about the fact that there are none today. “The people of the government just don’t know how to distribute financial means”, he says.

Despite the harsh environmental conditions, Org’s 300 cows give birth to 260 calves per year – the insemination happens via injections. These calves are – when old enough – sold in auctions across the country. The Boer (white people of Namibia with Afrikaans as their mother tongue) farmer often goes to the auctions in Grootfontein, the next bigger city which is about 90 kilometers distance from his remote farm. The calves are bought by other farmers who want to grow them and finally sell their meat. The process of meat selling is very strictly regulated in Namibia: “We are not allowed to use any hormones for our cattle”, Org says, leaning on one of the wooden pillars of the carrol’s fence. “Our meat is sold privately and to Meatco, Namibia’s (editor’s note: de facto) state-owned meat company.” On Meatco’s website, the company is described as “a meat processing and marketing entity. Meatco serves niche markets locally and internationally with premium quality products that are traceable from the farm all the way to the fork”. “The meat gets tested for hormones and other forbidden substances – if they find anything, you get a fine”, Org says. In Namibia’s neighbour country South Africa on the other hand, hormones are allowed in the meat business. Therefore, many South African farmers come to Namibia and buy the calves for a cheap price, they bring them to South Africa and give them stimulants there, Org tells. “This way, they manage to grow the cows from 200 to 600 kilogrammes within just 90 days. Here in Namibia, it takes us up to four years to reach the same amount of weight.” Compared to European meat, the one from Namibian farmers is basically untouched: While cows at big farms in Germany sometimes receive antibiotics every day, Org only uses medication if his cattle get sick – and only the sick individual receives treatment then.

Commercial farming is a big deal in Namibia: The area of the country is about 82 million hectares – 39 million hectares of this area are used for farming. In total, there are about 12.400 private farms in Namibia. Org’s Rooidag  farm (Rooidag is Afrikaans and means “dawn”) is one of them. Most of these farms are livestock farms, crop production is of less importance – in most areas it is just too dry. The Namibian people are very proud of their high-quality meat. A menu in a restaurant in Windhoek read: “In Namibia, it is easier to grow meat then veggies.” As a vegetarian, it can therefore be quite hard to get other food than side dishes. Farmer Org was almost shocked when he heard that some members of the excursion were vegetarians – including me. When we left his farm after two days, he friendly patted my back and said with utter conviction: “When you are here long enough, you will learn how to eat meat.”