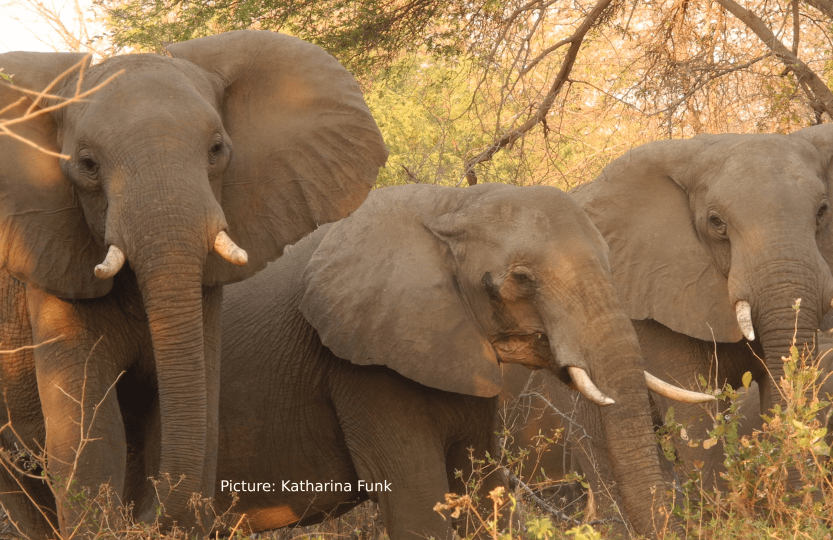 The airplane is making its landing approach around 10 am at the airport of Namibia’s capital city, Windhoek. Quite exhausted after the 10 hours flight through the night, I look up. Outside I can see dry grass, some bushes and a seemingly endless savannah. I am finally in Africa! A bright sun is gleaming in a cloudless blue sky and I am preparing myself for the heat. But when I step out of the plane, a strong gust of cold wind blows in my face. Shivering I draw my jacket closer around my shoulders. What a start for spending the next two weeks in Namibia!

We are spending the first two days of our excursion in Windhoek, a clean, and quite European looking city, trying to acclimatize to the windy and colder than expected conditions. On our very first day, we have the opportunity to meet John Kasaona, who is the head of the the IRDNC (Integrated Rural Development and Nature Conservation), one of two major nature conservation agencies in Namibia (the other one is NASCO (Namibian Association of Community-Based Natural Resource Management Support Organizations)). John Kasaona is a huge man with lively eyes, who greets us friendly and guides us into his office.

John tells us that Namibia experienced a severe drought in 1980 that endangered many wildlife species and threatened the life of the communities depending on the animals. Thus, the government decided to act and engage rangers to protect wildlife. But who knew the bush and the animals best? The answer was simple: Local poachers. So, John’s father, a former poacher, became a conservationist und John became one after him. In 1986, the number wildlife began to increase again and communities got the right to manage the nature surrounding them. To make nature conservation work, it is crucial that the locals can also benefit from nature. “Conserve and make sure that you benefit from the resources that you protect,” says John. Ten years later, the “Nature Conservation Amendment Act” finally passed, allowing communities to become so-called “conservancies”. This would prove to be a very successful concept throughout Namibia in terms of nature conservation.

Communities wanting to become a conservancy have to define their boundaries, give themselves a constitution, elect representatives of the community and submit management and financial plans. Thus, a conservancy resembles a national park, with the exception that people are still allowed to live on and use the land in defined areas. Nevertheless, the local communities have to respect certain restrictions e.g. in hunting and land use, to conserve nature. In turn, the conservancy gets the right to manage its own land. To generate income, conservancies can set up contracts with investors, who want to build lodges for tourists and trophy hunters. Part of the profit of the lodge goes then to the conservancy. The money is can be distributed evenly amongst the conservancy members or be used to build schools, health points or other projects that benefit the community. To make the foundation process even easier, the IRDNC provides assistance when communities choose to become a conservancy. John told us, he once camped under a large tree for many weeks, until the conservancy was finally running. Now, the conservancy office building is built under that tree. (Check out John’s TedTalk as well.) Today, in 2018, the number of conservancies has summed up to 82 conservancies in Namibia. And it is working: Wildlife numbers are increasing, poaching is becoming harder and harder and ecosystems find their balance again. Thus, Namibia, which is one of the few countries who specifically address habitat conservation and the protection of natural resources in their constitution, can set an example for us all.