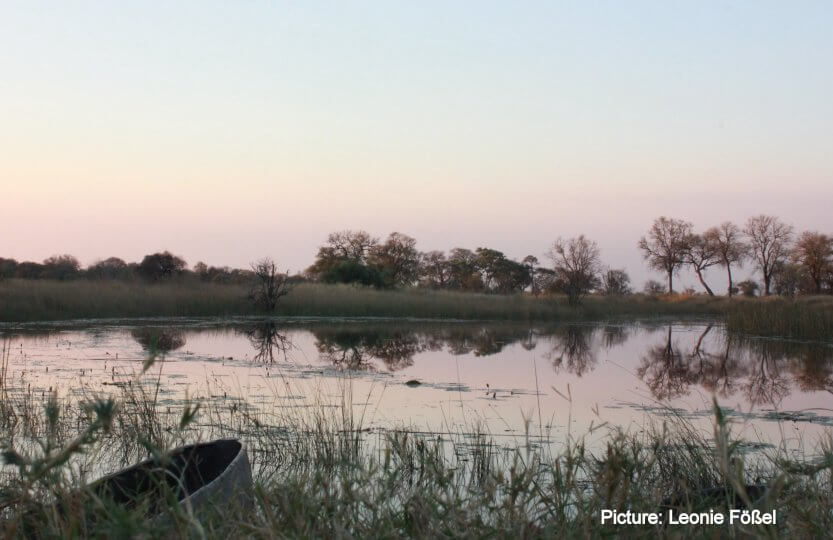 The thin tent cover is cold and wet. It is this time of the day when day and night are fighting with each other. The “Namibian alarm clock” has done its job one more time: Loud, many-voiced chirring, close-by grunting and distant roaring. A look at the watch reveals: 5.50 am. Opening the tent’s zipper with clammy fingers, slipping into the flip-flops standing in the entrance and crawling into the fresh morning air. The light is spectacular, bathing the savanna in golden rays. The sun slowly climbs over the horizon. A Namibian sunrise is quite different from a European one: The sun doesn’t rise as a whole, it changes from a deformed, egg-shaped red clump to its normal round form. Mornings like this are worth getting up before 6 am.

After breakfast, we pack the things we need for our day in the field: backpacks, pens, questionnaires, water, food, tree and wildlife books, sunscreen, hats and sunglasses. Dust raises as our two cars drive on the gravel roads of the Wuparo conservancy to the village Sangwali where we start our fieldwork every day. Wuparo means “life” in the local language Siyey. On our first day here, the committee of the conservancy welcomed us and gave us an insight into their work and progress. Conservancies are protected areas in Namibia where the local community protects their nature and is also allowed to work in tourism, for example by running lodges, campsites – but also by offering hunting tourism. If you want to know further about the concept of conservancies, read this article .The Wuparo conservancy is 148 km2 in area – quite big for the 2500 people living in it. “1500 of them are registered members which means that they will profit from the benefits of the conservancy”, says Shine Limbo, manager of the Wuparo conservancy. When asked why 1000 people are not registered, he answers with a smile, explaining that you can only register when you are above 18 – and there are many children in the area.

The days of our fieldwork are intense but incredibly interesting and full of new lessons. We are split up into three working groups:

One group goes into the field, recording plants by installing transects in the bush. For a transect, we throw a stick, roll out a measuring tape of 30 meters in the direction the stick points to and then record all the trees within two arm-lengths when standing on the measuring tape. Coully Sanimombo, a 27-year old ranger of the conservancy, helps with identifying the tree species – frequently recorded species are for example Combretum imberbe and Acacia nigrescens. Even though Coully doesn’t have a scientific background, the fieldwork without him would be almost impossible: He knows how the flowers of trees look like, which fruits they carry, if they are poisonous or not. As most trees don’t carry any fruits or flowers at the time of our research, he is basically indispensable for identifying the trees. As we are spending the whole day together, we also have lunch together, mostly sweaty and exhausted, sitting in the sparse shade of a tree. It’s a time filled of laughter and breezily chattering, exchanging about cultural traditions and differences. When Coully tries some of the olives we brought for lunch, he makes a face, shakes his head and grins: “Too sour”, he says.

The second and third group work mainly with the same method: interviewing people in the conservancy. While group two focuses on human-wildlife-conflicts (HWC), group three wants to investigate which impacts the conservancy has on the life of local people and on (the perception of) biodiversity and nature conservation.

The HWC-group has one questionnaire and mostly speaks to the people living in the villages: As not all speak English fluently, they get assistance from John Musuweu, a 30-year old member of the committee. He turns out to be very skilled in translating and choosing the houses and families. Once, when driving back to the conservancy’s office, he starts singing “The lion sleeps tonight” in a perfect imitation of the original song. “Bonjovo” – the Siyey word for elephant, is the most frequent answer of the local farmers when they get asked which animals cause the biggest problems. The people have different strategies to keep elephants away from their fields (the big animals frequently come at night and eat all of the farmers’ crops and fruits, leaving the fields totally destroyed): All farms are surrounded by a rather low traditional fence, built out of interwoven wood sticks. But there are also a few people who  set up fences with metal cans because the animals don’t like noise, they grow chili to build so-called chili bombs to ward of the animals with the stinging smoke or they guard their fields at night with torches to chase away the unwelcome guests. Taking care of the crops is work intensive, expensive and time consuming, so most of the people are not able to invest a lot in it. But most of them would invest in wired fences if they had enough money.

The third group has three different target groups and therefore also three different questionnaires. They speak to experts – referring to people working for the conservancy, at the lodge, in the field of nature conservation in Wuparo like John Kasaona (https://globalchangeecology.com/2018/10/17/living-with-wildlife-is-not-easy/). The second questionnaire is for people from all over the conservancy: farmers, students, workers, old people. It means a lot of walking around, talking to people, getting in touch with local people and their traditions. For example, in this region of Namibia, people clap their hands to say thank you. As tourism plays a big role in the conservancy, also tourists from all over the world get interviewed as a third target group. They are here for different reasons: Some just want to do a safari, others are interested in the culture – and then, there are also trophy hunters who come to the conservancy with a license to kill. More specifically, a license to kill wildlife in the Wuparo conservancy. Each Namibian conservancy gets annual so-called quota – numbers of animals they are allowed to shoot, given by the government to each conservancy and according to the numbers of wildlife living in the area.

After spending the whole day in the sun, crawling around in the bush, entangling ourselves in thornes, walking through the dusty villages, and talking to people, we return to our campsite in the evening with reddish, sweaty faces and dusty hands and feet. Exhausted but happy. We even have the luxury of being able to shower every night – but what is even better is to put the hurting feet into the cool water of the river next to the campsite. It’s a time for reflecting the experiences of the day, going through conversations again, thinking about that one tree species we couldn’t define yet. Sitting there, harking to the croaking frog-concert, it feels as if this adventurous life could go on like this forever.