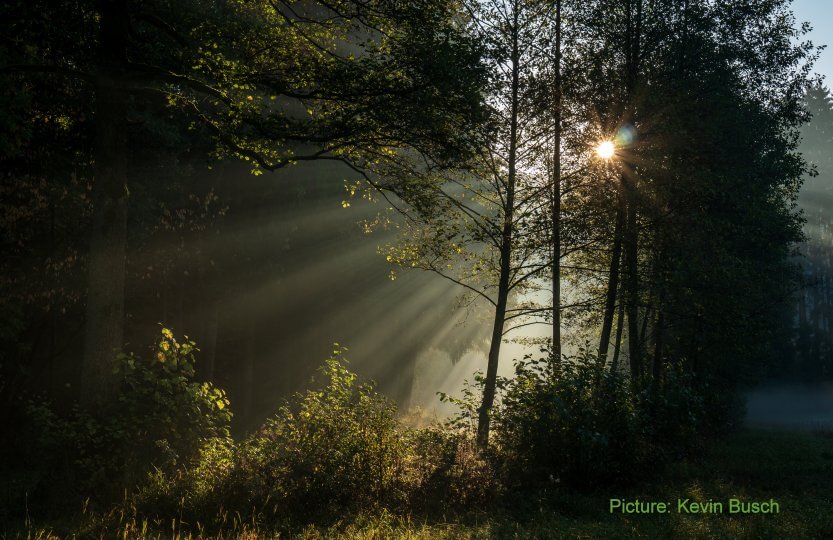 The Germans are said to have a very special bond with their forests: Already the famous poets Johann Wolfgang von Goethe and Friedrich Schiller wrote several poems about the forest – back in the 19th century; today, 2 million people own forests; when big parts of German forests were dying in the 1980s, people took it to the streets to save their forests. No wonder that the future of the forests is still a very up-to-date topic in research. On Friday, 19th October, it is all about trees at the Waldkontroversen conference here in Bayreuth, organized by Bayceer, the ecological-botanical garden Bayreuth (ÖBG) and Campus Academie. Waldkontroversen means “controversies of the forests”. And the talks of this forum are indeed dealing with controversial topics.

“It gets harder and harder to achieve a consensus on how the forest of the future will – and should – look like”, Gregor Aas, head of the ÖBG, says when opening the forum. The forum is split up into two parts: Part one is about adaption of the forests to climatic changes, part two is dealing with the climate protection function of the forests and how this could be used when dealing with a changing climate.

“How is the climate changing in Germany and how accurate are the forecasts?” is the title of the first talk. It is held by Johannes Luers (substituting Christoph Thomas who has been sick on the day of the conference). Some of the prognosis shown on his slides state that there is a climate change of +1°C already on a global level, others state that it’s already +1.3°C. “Over land, the temperature increase is already more than the +1.5°C which are the goal of the Paris Agreement”, Lüers says. The oceans need longer to warm up than the land – and 70% of the planet are covered by water. “Soon, it will be more, due to the rising sea levels”, Lüers says. The culprit for the rising temperatures is – as widely known – the greenhouse effect which is caused by different climate gases, such as CO2 or methane. “The human made climate change might not seem dramatic – but the consequences will be dramatic.” Time series of temperature measurements at the ÖBG show that there is a significant change in extreme values. The records indicate that between 1997 and 2016, 7 of the 10 hottest months and years ever measured took place – and only 1 of the 10 coldest months and 0 of the 10 coldest years. “The cold stimulus is missing – this affects the plants”, Lüers says. Forests have to deal with extreme years – wetness, drought and storms are making the forests’ life hard. “We don’t know what will happen in the future, there is always the human error.”

Next, Christian Ammer from the University of Göttingen talks about “How climate change affects the ecosystem of the forests and how silviculture can react to that”. He first lists some of the challenges and obstacles, the forest has to deal with today: deficits in precipitation, rising temperatures, more insect infestations and also the long lifespan of forests which makes them more vulnerable. “There are two scenarios: either the forests can adapt – or they can’t”, Ammer says. No matter which scenario will occur, there will be reductions in growth and altered mortalities. “I will present you a typical lumberjack – my former neighbour Sepp”, Ammer says, showing a picture of a middle-aged man in green overalls, standing in the middle of a forest. People like Sepp are now dealing with the questions how to treat their forests. Ammer talks about adaption: Mixed forests are more flexible, they recover faster from dry years than pure stands. Not only from an ecological but also from an economic point of view, mixed stands show positive effects to climate change. Indigenous species that are adapting well to climate change are the grand fir and the European black pine. “I totally failed in trying to persuade Sepp to plant some of them”, he says, causing quite some laughter in the audience. “His grandfather didn’t do that, his father neither – so why should he? You see, it isn’t always easy to change something.” But Sepp’s daughter listened to Ammer’s words and started planting some of the adapting species. Also, the thinning of the forest could reduce the risk of drought stress in young spruces, he says. Ammer concludes that the choice of tree species and crop treatment can help with the adaptation to climate change. But he also mentions that these actions are just to reduce the symptoms of a bigger problem: the human influence. “How many of you did come here by car today?”, he asks in the end of his talk. An embarrassed silence fills the room.

After a short break, Ralf Petercord from the Bavarian office for Forests and Forestry gives the probably most emotional talk of the conference: “Which new pests and tree diseases are brought by climate change?” Petercord uses a lot of empathy and irony while talking about different insect and fungus calamities. “The bark beetle is definitely not interested in how the weather is behaving tomorrow or in 10 years – it is interested in the weather today”, he says. As the previous speakers, also he mentions the unusually warm winters and extremely hot summers which occur in ever shorter intervals. The reactions of insects and fungi to climate change are various: They show different distribution patterns, a decreased generation time and a broader host range which means that they can attack more different species. With figures on various slides, he shows how the bark beetle population and also their effects on trees have increased after very warm years – the heat summer of 2003 is a very indicative marker – but there is a general increase visible since 2015. Also, the Oak Processionary Moth has changed its distribution dramatically: “In 2007, this moth was listed as an endangered species in Upper Franconia – today you can find it almost all over Bavaria!”, Petercord says, gesticulating on the stage. The Gypsy Moth causes huge damages in forests as well: Their complete defoliation leads to a thin canopy – due to the missing shade many young birds die in their nests. “Our forests are dying! We have to do something so that they can recover”, Petercord says, putting quite a lot of emotion in his words. As one of the strategies to handle pests he names that we all have to reduce our consumption of wood: According to Petercord, every German person uses about 600 Gramms of wood every day. Also, using pesticides in forests should be an option for him. When a member of the audience asks what he thinks about the insects’ demise, he answers: “I think, the insects’ demise is not only caused by pesticides but by the fact that we are driving around in SUVs in the city and want cheaper food all the time. First, I talk about the poor insects – and then I want to have my 500 gramms of meat from Aldi for 2,63 Euro!?” These words are greeted with tumultuous applause by the audience.

“Nature conservation, climate protection and climate adaption – how does that fit?“ – this is the topic of the last talk, held by Susanne Winter from WWF. She speaks about the loss of biodiversity in Germany – which has already crossed a tipping point. “The climatic relevance of forests is huge. About 15-20% of the annual CO2 emissions are caused by deforestation”, Winter says. According to her, the usage of wood is not sustainable per se, referring to wood that is used for energy generation. “Forests work as a carbon sink. But this sink function has decreased”, she says. While German forests were storing 75.500 tons of CO2 in 1990, in 2016, they only absorbed 57.000 tons of the climate gas. There will be a point when forests work as a source of CO2 instead of a sink – for example when deforestation continues, if swamp soils are used by the agricultural sector for crop production or if peat is extracted to the same extent or even more than now, Winter says. In the audience, a few people show with their reactions that they don’t agree with Winter’s words: A lady – the print of her jumper reveals she is part of a forestry society in Lower Franconia – rolls her eyes and throws up her arms, a gesture of obvious frustration.

At the end of the event, the title “Controversies of the forest” is just perfectly accurate. We don’t know yet what the future with a changing climate will bring and how the forests are going to react to these alterations. Different measures for mitigation do exist – but the human factor is hard to estimate. Also, regarding some of the reactions of people in the audience, it is obvious that many different parts of the German population are differently affected by changes in the forest – and that their expectations, hopes and fears need to be considered. But this requires a lot of work and a lot of communication. But as the example of Christian Ammer’s friend Sepp (and his daughter) showed: There is a way. With enough patience, solutions can be found.