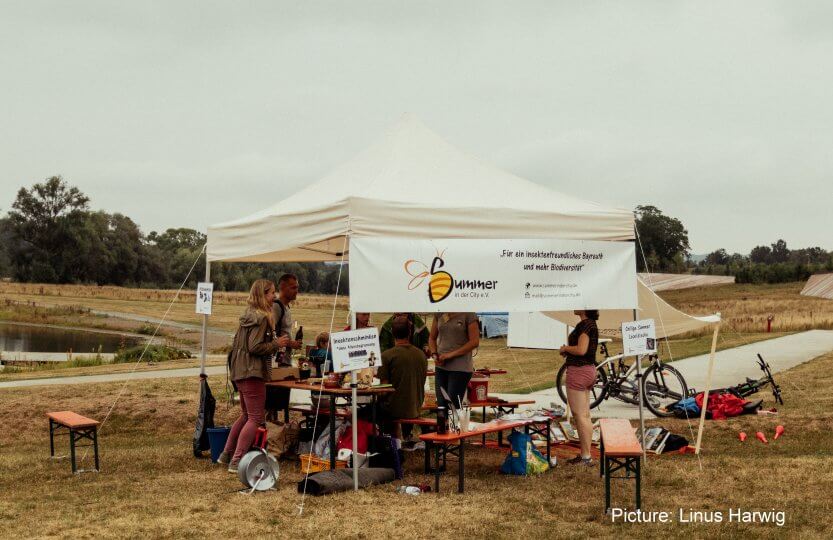 „It is not your fault, the world is at it is. It would just be your fault if she stayed like this!”

At the top of their voices, the “Summers” are singing the lyrics of the famous song of the German band “Die Ärzte”in the small, tiled kitchen. Some of them have taken off their shirts and dance around, it is warm and stuffy. “Your fault” is probably the perfect song for this party: the students are celebrating the success of the referendum for biodiversity protection in Bavaria. They not longer wanted to be responsible for no changes in the world. For weeks, they have distributed leaflets, stood in the freezing weather of February to speak with pedestrians, dressed in bee costumes, to raise awareness for the referendum on biodiversity. Still wearing their orange safety vests with the imprint “Save the bees” on the back, they dance through the apartment, where the party takes place.

“Don’t believe anyone who tells you, you can’t change a thing.

Those who say that are just scared of changes.”

On Wednesday, 13 February 2019, the referendum ended and it was clear: The topic enters the next round, the needed 1 million signatures, equivalent to 10% of the population,  have been collected in Bavaria. To be more precise, the needed limit has been exceeded. In total, more than 1.7 million people have signed the petition in the city halls across Bavaria, indicating that they want more biodiversity protection and conservation. “The referendum in Bavaria is a clear sign, also for the current negotiations in the EU agricultural policy”, Stefanie Propp says, second chairwoman of the “Summers”. In Bayreuth, she was as well speaker for the referendum on biodiversity. “I was sure, we would reach one million signatures. But more than 18 percent were achieved, that makes me even more happy and shows our dedication is worth it!”

In Bayreuth, the “Summers” have definitely helped the referendum to succeed. But who is behind that name? In 2018, various students of the University of Bayreuth founded the club “Summer in der City” to put a spotlight on biodiversity. “We were nine students and wanted to change something”, Thomas Pickel says. The 27-year-old student of geoecology is one of the founders of Summer in der City. Their name is not a hidden sign for a club of Joe Cocker fans but refers to the word “summen” which means “buzz” in German – very accurate for a club trying to save insects. “Currently, we have 15 members who are very active, meaning they are contributing more than once a week. Furthermore, there are 30 to 40 more people who are also helping often.” So far, the club is completely funded by donations and the membership fees. It costs 10 Euro per year  to become a “Summer”. “It is wonderful to see that so many people want to contribute to nature conservation”, Leonie Gass, member of the Summers, says. “It gives me new power and new confidence that something is going to change!”

Initially, they could share their expertise with others in smaller projects. So, they made sure that the meadows at the campus of University of Bayreuth are only mowed twice a year. This happened in cooperation with Green Campus and Christian Laforsch, professor for animal ecology at the University of Bayreuth. This way, more plants are blooming and thus offering food and habitat for insects.

While the University of Bayreuth mixed seeds into the ploughed soil and created space for insects that way, the students built insect hotels. Soon, they will install them on campus. At “Wilhelminenaue”, the Summers have created grassland and low-nutrient habitats on the area of the initiative “Essbare Stadt Bayreuth” (German for eatable city). Insects will also find new space to live on there. “This was our main project last year”, Stefanie Propp says.

“We wanted to get active. We know the problem, but we don’t just want to complain about it but actually change something”, Thomas Pickel says.

“Because everyone who doesn’t want to change the world, is signing her death sentence!”

The fact that most members of the Summers are students is both, a curse and a saviour at the same time. A saviour, because they have a lot of expertise in that topic due to their study programmes. A curse, because students often move away, causing frequent changes.

Therefore, the Summers wish to engage more people from outside the university. To make this happen, they want to work more in public areas.

“For this year, we have planned two big projects”, Thomas Pickel says. First, there is a nature garden project which provides the Summers the chance to create a natural garden on an area of 10.000 m2 in Wilhelminenaue. A crowdfunding campaign is supposed to help to construct the garden. “In the nature garden, amongst others, there will be a wild rose garden and a meadow orchard. They will as well attract insects and create new habitats for other animals such as hedgehogs and lizards.”

Second, there is the project “Franken Flowers”. It is planned for 2019: The Summers cooperate with regional market gardens to sell domestic indigenous flowers and shrubs. This is important as some insects rely on special plants. “We hope, the natural garden will encourage people to create such a garden at their homes as well.”

Sleepless nights, sore arms and legs from digging in soil, working hard to awaken other people – all that is often the daily life of the Summers. But is seems to be rewarded: The fact that nearly twice as much people as needed signed the referendum, bolsters them. Some movement is happening. It just needs someone to take the first step. Just like the Summers.

„It is not your fault, the world is at it is. It would just be your fault if she stayed like this!”