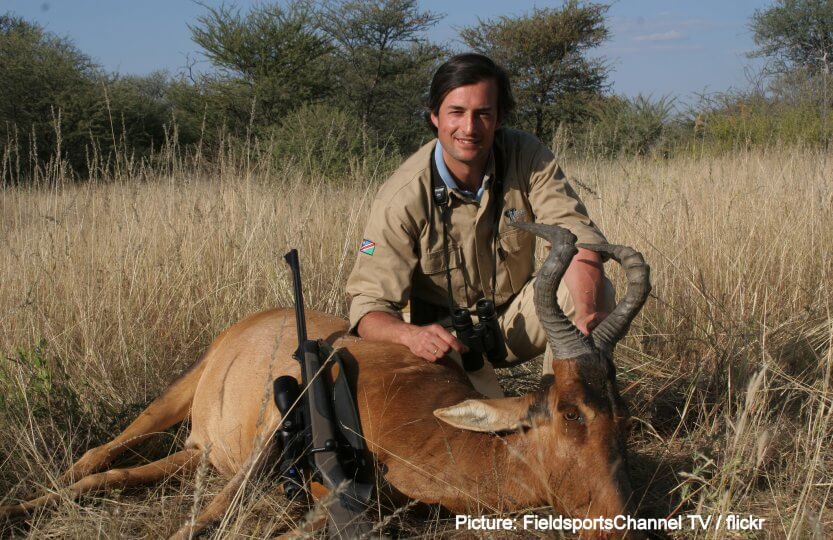 „We don’t hunt The Big Five because of ethical reasons – and because it is way too expensive”, the white-haired, elderly man says, sitting in a chair at the Nkasa Lupala Lodge in the Wuparo Conservancy, glancing over the wide savannah landscape. “The Big Five” refers to five certain animals living in Africa: elephant, buffalo, lion, rhino and leopard. “But we do hunt other wildlife like antelopes”, the man says, lifting his aristocratic chin. He and his wife are trophy hunters from Germany, spending some time in the Wuparo Conservancy.

Trophy hunting is a very controversial topic – it can get quite emotional. Trophy hunting can be defined as killing wild animals for their body parts, such as head and hide, for display but not primarily for food or sustenance. The controversy about trophy hunting is whether it supports biodiversity and wildlife conservation or if it is a threat to the species. Some in favour of trophy hunting argue that by targeting only old bull elephants, it is a sustainable way to protect the animals and their habitat. On the other hand, there are arguments that the practice leads to decreasing numbers of wildlife – especially when it comes to already endangered species.

One other point of supporters of trophy hunting is that it brings huge financial benefits to the communities in Namibia – which is in fact a solid argument: In 2017, the Namibian Ministry of Environment and Tourism said that conservancies are generating about 100 million Namibian dollars (around 61.500 Dollar) on average per year with trophy hunting. Besides the financial benefits on a national scale, also the local population of conservancies receives monetary support from hunting: The hunter pays a fee for the animal and this fee goes back to the conservancy. The rates for hunting are nothing for people with a small purse: To go for a 14 days elephant trophy hunt in the Zambezi region, one has to calculate about 72.000 US dollars. Hunting a buffalo costs up to 22000 US dollars including the trophy. The hunting organizations also offer packages for hunting: 7 days of trophy hunting including 7 trophies cost up to 6450 US dollars – the 7 species to be hunted are springbok, blesbok, gemsbok, blue wildebeest, red hartebeest, warthog and zebra.

The conservancies receive parts of this money and use it in various ways to support the local communities. In the Wuparo Conservancy, most of the money is used for social projects like the installation of electricity or providing access to clean water by drilling wells. The big aim of this kind of hunting tourism is to stop people from poaching. If some individual animals are killed and bring benefits to the whole community, the rest of the species is protected and the ecosystem remains in a sound state. At least, this is the theory. Also, the hunter is taking the trophy of his hunt – like horns, tusks or skin – with him, but the meat goes to the local population. During our research in Wuparo, the majority of the local respondents of the interviews rated trophy hunting as “good” because it brings them meat and money. Tourists on the other hand mostly disliked trophy hunting, arguing that it was a cruel and unnecessary practice.

Every year, the rangers of the Wuparo Conservancy monitor animals, record the numbers of wildlife and write them down. Based on these records of the monitoring, the Namibian state gives out so called “hunting quotas” for every year. These quotas define how many animals are free for shooting. “We have quotas for our own use, for traditional use and for trophy hunting”, Shine says. If a certain species has not been registered a lot of times and therefore seems to be not very abundant, the quota is low. On the other hand, if a species has been recorded frequently, the quota is higher. For the last year, in Wuparo, there have been quotas on buffalos and elephants for example. “This year, we had 16 quotas on buffalos, two for our own use, two for traditional use and twelve for trophy hunting”, Shine says. “Quotas for elephants were much lower: one for own use, one for traditional use and three for trophy hunting.”

Roggero Michelletti sits on one of the comfortable chairs in the Nkasa Lupala Lodge in the Wuparo Conservancy when we meet him. The rolling R’s and his singing way of speaking reveal the Italian roots of the lodge owner. “I don’t consider trophy hunting as tourism”, he says. In his eyes, it isn’t sustainable in the long term – even though at the moment it brings more money than safari and photography tourism. He lets his glance wander over the dry, yellowish savannah. A huge male hippo is taking a bath in the cool water of the river in front of the lodge. “I would stop hunting elephants and lions. By killing all the big bulls, you destroy the genetic pool.” He is happy though that in the Wuparo Conservancy there is a zonation defining areas for different usages. “It is not like in other conservancies, where safari tourists are marvelling an elephant from the car – and the next moment it falls over, dead, shot by a hunting tourist.”

Brutus Liwate Mosutela, a tall and robust man, sees this differently. “As they (editor’s note: the elephants) migrate and mix with others, there is still an exchange of genes”, he says. Being the hunting guide and the head of the rangers in the Wuparo Conservancy, he has a lot of experience with the fragile topic of hunting tourism. Growing up in the area, poaching was a daily companion, he says. “I have been poaching game like buffalos and hippos before as well, to feed my kids. We just hunted for the meat. If we stopped trophy hunting now, people would go back to poaching again. Before this became a conservancy, I had no work and no money – now I do have both and can feed my kids”, he says, gesticulating with his large hands. When we ask him if he thinks the Wuparo Conservancy could survive without trophy hunting, he tends his head back and forth, thinking for some moments. “For some time, it might survive”, he then says, “but not for long.”

The topic of trophy hunting is indeed controversial. When only looking at the local population of the Wuparo Conservancy, it might seem like it totally makes sense because people need to eat, and they want their lives to change to the better. Free meat from the hunter plus money for the conservancy – there is an undeniable benefit for the people. When looking at biodiversity and animal numbers, different statistics exist, different results of research indicate either decreases in wildlife numbers due to trophy hunting or they suggest that trophy hunting leads to less poaching. So at the end of the day it is a very personal decision if you want to shoot an elephant or let it roam in the wilderness of the Namibian bush.