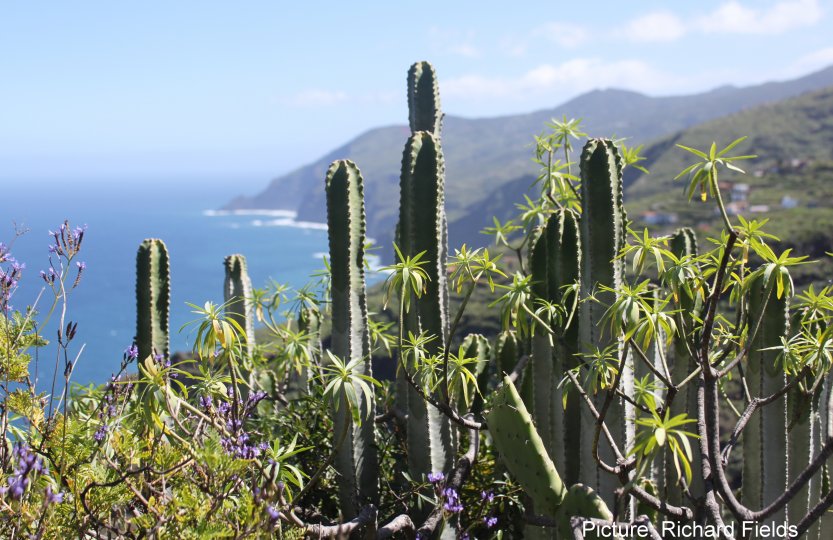 It is quite sunny on this day in the beginning of April. Severin Irl and Dagmar Hanz are sitting in their office at the department of Biogeography of the University of Bayreuth, good-humoured and well-tanned. No wonder – they just came back from their trip to the Canary Island La Palma, situated in the Atlantic Ocean. For two weeks they have been working there at the La Palma Summer School which takes place every year and is organised by Prof. Carl Beierkuhnlein and Dr. Severin Irl from the Department of Biogeography at the University of Bayreuth.

“In La Palma, we want the students to get in touch with science from a to z”, Irl says. The 34-year-old professor has been part of the annual La Palma Summer School for 10 years. “For us, this summer school is really important because we accompany the students’ working groups from the creation of a research concept to the final presentation about the whole project.” During the two weeks, there were also professors and specialists from other European countries supporting the students with their projects.

The biggest part of the work is done by the students in a self-directed way which can, according to Severin Irl, also cause problems during the working process or with the results themselves. “Actually, we just throw the students into the cold water and want them to learn how to swim”, Irl says and laughs. Sometimes, students who participated in the La Palma Science School are choosing a scientific career after experiencing this special research training. “This research project is one of the most important ones for the department of Biogeography here in Bayreuth because we are working together intensively with the students during the whole time.” The project takes two semesters in total, from the first approaches in methods to the final written paper. “As they are dealing with the project for such a long time, some students even kind of adopt it as their baby”, Irl says, a with a twinkle in his eye.

26-year-old Dagmar Hanz is one of the PhD students in the department of biogeography in Bayreuth. She is funded by the Ecopotential project, we recently wrote about. This year, she was also part of the research group on the Canary Island. “We are cooperating a lot with the local authorities, our results often help them with nature conservation projects on the island”, she says. “I am glad to have been part of the Science School, it was really good to actually use various methods. In university, we read about them, but experiencing them is something completely different.”

La Palma is an excellent spot for the research which aims at studying plants and their multifaceted interactions with the environment. This is mainly because the island is very mountainous and therefore has a broad variety of climate and vegetation zones: you can find steep coasts with species adapted to salty and dry conditions (such as sea lavender), dry regions that are crowded by succulents, and even dense laurel forests which grow due the humid trade winds. Also, you can find lots of endemic species there. Even though the island is not big, roughly 40 kilometres long and 30 kilometres broad, it takes quite a while to circle it. “The roads in La Palma are in some parts steep and extremely curvy. It took us up to five hours to circle the island once”, says Dagmar Hanz and laughs.

“Another important factor is that – compared to some of the other Canary Islands like Tenerife or Gran Canaria – mass tourism has not had such a huge impact on La Palma yet”, Severin Irl says. It is still quite untouched in some areas which often brings surprises: This year, the research team might have stumbled upon a new species of carline thistles in the far North of La Palma. “We have identified it as a species from the genus Carlina but we are not sure yet about the species’ name”, Irl says. “Every year again, La Palma is just beautiful.”