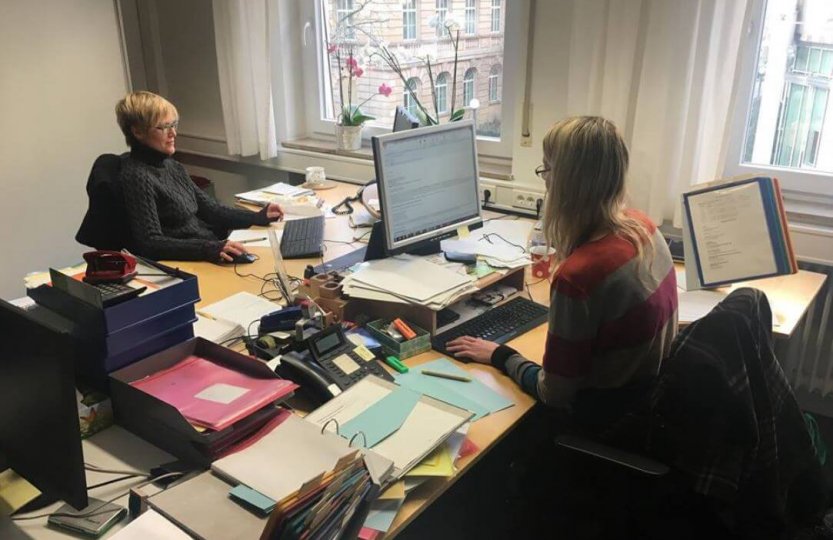 “Sometimes there are conflicts between freetime activities like mountain biking, climbing, diving and nature conservation”, explains Gerhard Brönner, director of the LNV in Baden-Württemberg.  “The LNV tries to find solutions together with all stakeholders. Nature conservation is successful only when it follows the principle “use it or lose it”. For this reason, it has to provide benefits to everybody, otherwise it is not effective in the long run.”.

Since those associations have different opinions and ideas, the LNV mediated the creation of agreements consisting of position papers followed by the 33 organizations. These position papers are important for county working groups as they serve as a directing line for working volunteers. Brönner deplored the recent difficulty to find new volunteers:

“Most of the work is done by volunteers. That is why it is essential for us to find dedicated people. Sometimes we have the chance to be in contact with relevant persons and try to get them to volunteer at the LNV, retired public servant for instance”, he says. According to Brönner, the LNV  is recently facing difficulties to engage young people in nature conservation.

“I guess it’s due to new technology distractions, a lack of commitment or a change in generation mindset and interests”, he says.

With so many different stakeholders it takes a long time and effort to develop a common position paper — the last one took about 1 year to be written. LNV was facing difficulties with a hunting regulation, but it finally found an agreement pleasing everybody. Some of these positions are very sensible and if one of the member organization has a different opinion it cannot speak about it in the name of the LNV. It has to stay in a “grey zone” with its own opinion. However, most of the time the 33 organizations cooperate and stay united to defend their view in front of the politicians.

The LNV is mainly financed by the local state subventions and organization membership fees. “The state budget varies and has to be approved annually, it is rarely sufficient”,  complains Brönner.

Each of the 33 organizations belonging to the LNV pays a membership fee based on their size, which means based on the  number of individuals in the organization. Usually only NGOs can be members, nonetheless individuals can support the LNV by paying an annual membership fee of 300€. “Those supporting individual members don’t have any voting rights. In addition, they have to be approved by the LNV’s executive board to avoid any conflict of interest. For the same reason, the LNV refuses money from companies and corporate. Unlike famous international foundations such as WWF and Greenpeace sponsored by rich donors and organizations, we prefer to be as independent as possible. Even if we received two third of our budget from state subventions, we would still criticize it openly and freely”, the director of the LNV says.

For specific projects requiring extra expenses, the LNV raises fundings through donation campaigns. “Although donations vary, most of the fundings are constant over time as public subvention and membership fees are fixed”, says Brönner. All this money is used by the LNV to act politically as a lobbyist,  so that they can pay their office staff and defray their volunteer expenses.

LNV’s role at the state level

The LNV is a consulting organization, it doesn’t deal with practical environmental protection but gives detailed opinions about projects impacting nature and organizes lobbying legal actions. Currently, there is one court case against a windmill built in an area of the red kite (Milvus milvus).

“On the one hand, we don’t have enough space in Baden-Württemberg to produce all the energy we need. On the other hand, in the north-western states of Germany there is more electricity produced than needed. To solve our energy problem, there is a project to bring electricity from Morocco with windmill on the coastline and solar panels in the Sahara. Only 5–10 % of the electricity would be lost during the transport and it could provide energy to all Europe” says Bronner.

The LNV helps county administrations create landscape conservation unions and mediate nature conservation actions between towns, farmers and conservationists. It also tries to convince the state government to provide funding for every county to have his union. Since there is an increasing demand of space for infrastructures and settlements, the LNV ensures the efficient use of the scarce urban land and abundant cheap rural land. “In the countryside, we try to integrate agriculture with nature conservation. We try to make farmers have a more biodiversity friendly and still economically viable management. We need to change the policy and get away from the current agri-environment scheme which subsidizes farmers on a hectare based evaluation”, Brönner says.

To control the implementation of impact compensation in the state of Baden-Württemberg, the LNV is also creating a system where all compensation measures are documented.

Once per year, in autumn, the LNV holds the “Zukunftsforum” or translated “Forum of the Future”. The aim is to bring different stakeholders together to discuss about pressing issues: last year’s conference, for example, they discussed about the declining insect diversity. Two years ago, the forum was about environmental education and the LNV tried to convince the local government to put back the basic identification of plants and insect families into the school curriculum.

“In the forum we promoted so called Naturpark schools which are primary schools in the south of the Black Forest where children go outside and learn practical subjects about nature. Pupils also meet rangers, foresters and carpenters to widen their view on the world”, says Brönner. “Nonetheless it is difficult to create these schools because teachers lack training about nature. Thus, they are afraid to go out of the school because of security and responsibility issues. Not to mention the difficulty to get parent permission and logistic funding. Another problem is the lack of experts in various conservation fields, people who know the insect or plant species. This is mainly due of the low wages in this sector.”

LNV’s role at the national and European level

As mentioned before, the LNV is a state run organization. Nonetheless, at the federal level, the LNV is part of the “Deutscher Naturschutzring” (translated German nature conservation ring) organization which assesses and shares the most efficient policies and practices among states.

“The Deutscher Naturschutzring regularly publishes reports and organizes meetings, so there is a communication between Federal states. A good example is a recent study searching for the best conservation regulations among states. We submitted the best ones to the Ministry of Baden-Württemberg and some were added in the state law.”, Brönner says.

The organization reminds the state government about their commitment to European environmental laws such as the Habitat, Birds directives and Natura 2000, in extreme cases it can complain to the European court of justice in Brussels.

To conclude, I would like to remind all of us that “alone we go faster, but together we go further “.

If we want our Earth and people to go far, we will need to strengthen the means of implementation and revitalize partnerships. Organizations like the LNV are already doing this, enhancing cooperation between different stakeholders and acting for sustainable development and use of Central European landscapes.