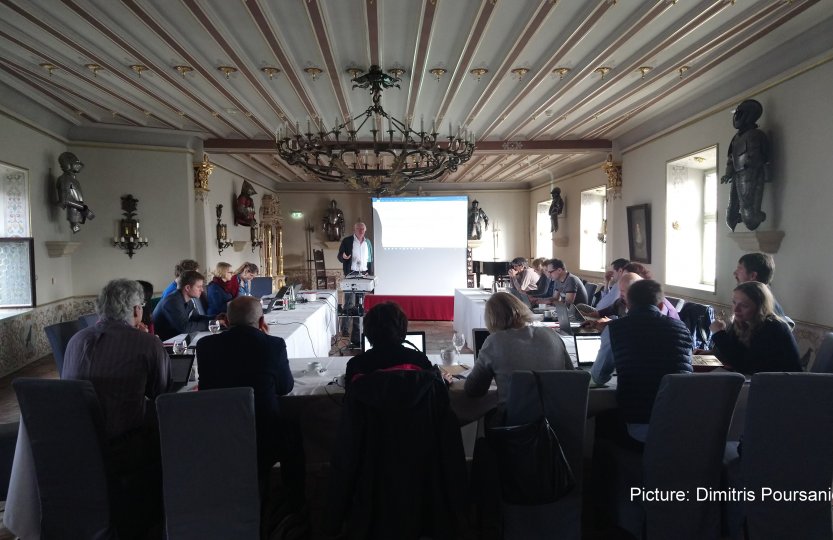 About three weeks ago, researchers and specialist from all over Europe came to Burg Rabenstein, a castle in the heart of Franconia. The reason for this encounter was Ecopotential, an EU-funded project that has the aim to monitor European ecosystem services through Earth observation, using satellite imagery and remote sensing. Ecopotential focusses on protected areas all across Europe and aims to maintain and ensure their protection in the future. The department of Biogeography from the University of Bayreuth is also a member of this project. I had the chance to take part in this one-week-long workshop as an assistant student (mainly by picking up people from the airport and bringing them to Burg Rabenstein – but of course I also had the opportunity to be a fly on the wall in some of the meetings and listen to the discussions).

First of all, meeting all these people, specialists, freelancers, professors at universities was quite a nice experience. They come from all over the EU, some of them are currently working and living at such distant places as New York State in the US or the French island La Réunion in the Indian Ocean. In total, there were around 25 people coming by train, car or plane to Burg Rabenstein. They have totally different backgrounds in their studies and also work for different institutions like universities, research institutes or the United Nations.

It was fascinating to see how EU projects work. There were different topics researchers are working on: Some groups dealt with mountainous ecosystem services and how they could be assessed, others wanted to create a new type of databank, in another room, the members aimed to assess the services of Lake Ohrid in Macedonia. Also, the functioning of the group as a whole was interesting because so many different nationalities and cultures clashed during these intense workshops – it was noticeable in subtle ways like the different forms of approaches or varying opinions on the meaning of certain words. Some discussions took much more time than they were meant to, for reasons like a very long debate about how to use the term “ecosystem services” correctly. Despite all differences and discussions, it is remarkable that there was never a lack of respect and even though hands were thrown into the air and, during heavier discussions, loud sighs were made and sometimes eyes were rolled, there was an overall kindness and understanding for the others.

As the topics were widely ranged as mentioned above, the groups worked also with different approaches. Some groups would directly start off with brainstorming and writing their ideas down in a word document. Others made mind maps and drew graphs on paper, trying to get their topic from another angle. While a few groups only consisted of two or three people, in others there were more people involved. Not all members of Ecopotential could manage to come to Franconia to join their colleagues. So, there were quite a lot of Skype calls during the working sessions.

During these days of intense workshops, I had the chance to not only see the researchers as such, but also to look behind the facade. This is a very important fact that we often tend to forget: Researchers are also only human beings. This means they have a passion they live and work for but on the other side, this means that they also have “normal” interests besides their research like good food, music, books. They have families and other beloved ones they care for. And some of them are extremely funny – something that doesn’t really correlate with the stereotype of the serious researcher who appears to be from another planet.

It was an eye-opening time in Burg Rabenstein because in another context I would have gotten to know these professors and international specialists in another way. Maybe this is something, we should do more often: Read between the lines, look at things from other perspectives and to think outside our own very narrow box.