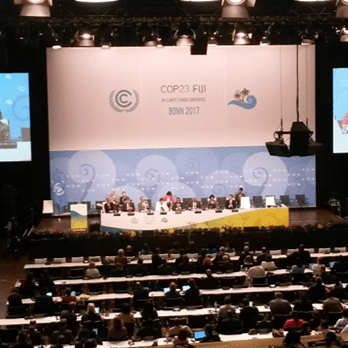 << Climate Change is not an academic subject, it´s a matter of life and death.>>
– Henry Puna

In the early morning hours of the 18th November 2017, the climate change COP 23 in Bonn came to an end after two weeks of negotiations, discussions and debates. The conference didn’t result in tremendous progress but met the overall expectations. Progress in implementing the Paris Agreement was achieved and next steps towards the coal phase-out were undertaken. Bonn was a necessary step on the way to Katowice next year where the members of the parties will come together again.

One main outcome of COP 23 consists of the further elaboration of the Paris Agreement’s Rule Book. Clear and consistent standards were needed regarding measuring and reporting CO2 emissions as well as advances in climate protection on the national level within all participating nations. Aiming for the prevention or at least for slowing down the global heating, a draft of around 200 pages was presented. This document will be finalized and adopted at COP 24.

Despite the disappointing German position concerning the withdrawal from coal use, the initiation of the global “Powering Past Coal Alliance” was a great step towards a coal free future. Under leadership of Canada and the UK, more than two dozen countries, provinces, states and cities agreed on the phasing-out of the climate killer within the next decades. Germany might follow in 2018. Its role as a financial supporter of climate protection is very important but others took over political leadership.

Contrasting Americas official position, positive signals came from other US representatives including civil society members, companies, states and cities: “We are still in!” – a clear message and support to keep the spirit of Paris alive in Bonn.

Further achievements are the adoption of the Gender Action Plan, the development of the Local Communities and Indigenous Peoples Platform and the launch of the Ocean Pathway Partnership. In order to promote and stimulate the process of inclusive, participatory and transparent dialogue, the Talanoa Dialogue was initiated. This facilitative exchange encourages action in climate mitigation by bringing together science, industry and the civil society.

Apart from the negotiation processes in the Bula (Fijian for “hello”) Zone, the organization of the climate conference in Bonn in two zones, also provided room and opportunities for showcasing projects and examples of implementation. Countries, industry and civil society presented a wide spectrum of climate action solutions in hundreds of events in the Bonn Zone.

The COP 23 was characterized by the shared general consensus to get active in climate policy. That is a strong signal but a lot of work remains until more groundbreaking decisions will have to be made in Poland next year. From our perspective as scientists, the statement of His Excellency Mr. Henry Puna, Prime Minister of Cook Islands, should provide motivation and be seen as a mandate: “Climate Change is not an academic subject, it´s a matter of life and death.”