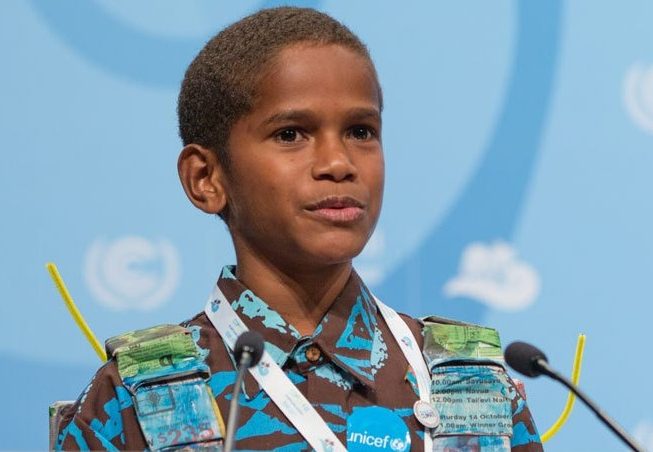 (Bonn, 17.11.17) As the sky in the city of Bonn takes on shades of orange last Friday, the United Nations Conference on Climate Change has come to an end.

Although the negotiations in the Bula Zone were still going on until Saturday midnight, the exhibition booths and pavillions in the Bonn Zone – where the side events had taken place for the past two weeks – were being dismantled and packed for the next occasion.

During our stay in Bonn, all of us heard many opinions about COP23. Those opinions were a mixed bag. While some of them were optimistic, some were pessimistic. Some people had criticized the slow pace of the #ClimateChange negotiations and there were others (including me), who remained thoughtful.

Throughout my time at COP23 I had a nagging thought in my mind. I had witnessed how world-class politicians would talk about #Change, but as soon as they would leave the room, their #ChangeMomentum would vanish. Their rhetoric speeches that had called for global climate efforts vanished into empty ambitions, in an aesthetic diplomacy, in “just words”.

Many were wondering why the political discourse at COP23 sometimes resemble a business talk that gave the impression that our future was being negotiated and traded. Perhaps going back to one essential thought was necessary at COP23 to realize the urgency of a Changing Climate and of a Changing Nature:

With every second, minute and hour that went by during the Conference:

So, how could we all talk for hours,
when it is exactly now that things are happening?
It is exactly right now that Action is needed?

On one hand, the ongoing negotiations of COP23 left behind a taste of uncertainty in regards to concrete efforts towards Global Climate Action, towards Energy transition and towards an effective and pragmatic implementation of the Paris Agreement 2015 in the subscribed countries’ national policies. On the other hand, a collective call for urgency and hope was also heard at COP23 and it forged the necessary optimism and confidence that Change is not only possible, but that it should be done by Our Hands.

Perhaps, after all what has been said and done, the greatest achievement of COP23 was to unite around twenty thousand voices of agents of change from all over the World and to gather them in the same place and at the same time.

COP23 brought the vulnerable, the emerging and the powerful Nations together. In spite of their political and historical differences – reunited them around the goal of protecting Nature and its inhabitants – from ourselves.

From Pacific Island Climate Warriors and indigenous Amazonian and Andean voices, to change-driving Eco-villages and civil initiatives in Africa and Europe, everybody shared their own testimonials of change, of local empowerment, and existing solutions. The message that impressed me the most was from the “African Voices” Event (Talanoa, Bonn Zone) which reminded us that there are no seventeen Mankind Goals*, instead, there is just one and that is love. Love for nature and love for each other, to reflect on our actions, to assume responsibility and to take care of all the inhabitants of thi

To the Love component, the Action component was added this past Wednesday, when Timoci Naulusala – a 12-year old Fijian schoolboy – reminded us that “it’s not about how or who, but it’ s about what you can do as an individual”.

As complicated as international agreements may seem, the Change we all really stand for is as basic as Love put into Action, Conviction put in practice and Justice made reality.

International negotiations and agreements either at this COP23 or at any COP ahead will stand for Sustainability and Peace. However, what we should truly stand for is the empowerment of our individual Potential of Change, the courage to challenge our mindsets, the conviction to improve our lifestyles and the realization that this is the only Planet we have, for us today, and for the coming generations.