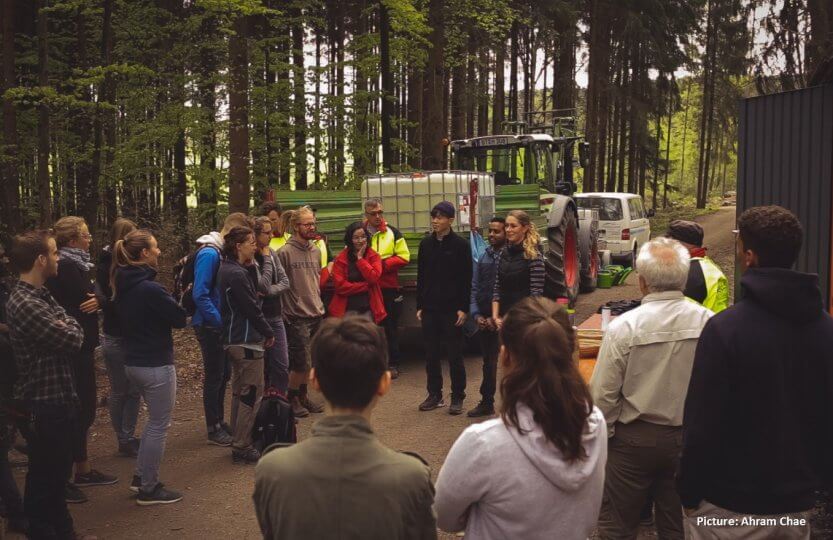 The consequences of climate change can no longer be overlooked in some of Germany’s forests. To address this, three students from the international master’s program “Global Change Ecology” (GCE) in the Elite Network of Bavaria initiated the “Klimawald” project. Together with around 250 helpers, they planted seedlings of climate-tolerant tree species in a forest area in Bayreuth. There is great interest in the project and it may be repeated elsewhere in the near future.

The large-scale fires in Australia recently brought the impacts of climate change on forests back into the public eye. However, climate change not only increases the risk of forest fires, but it also presents other major problems to forests in these parts. This can currently be observed in some regions of Germany, where spruce trees in particular have fallen victim to drought and infestations of bark beetles.
In order to better adapt a Bayreuth forest to climate change, GCE students Theresa Landwehr, Kun Woo Ro and Nikunj Pathak initiated the “Klimawald” project. In cooperation with several project partners, these three students with the help of around 250 volunteers planted over 4,500 trees in three days at the end of April 2019. This project took place in a forested area that had been damaged by storms and drought. The planted tree species had previously been selected by experts and were characterized not only by their climate tolerance but also by their valuable wood. In the next few years, the seedlings will continue to be cared for and replanted if necessary.

The GCE students were overwhelmed by the great response their project generated. The regional media reported on the “Klimawald” and there is still great interest among the population. In the meantime, the “Klimawald” has become an excursion destination and more areas are scheduled to be planted with climate-tolerant tree species.
The idea of ​​the “Klimawald” is also spreading outside of Bayreuth: For example, students from Höxter have proposed they would like to carry out a similar project themselves. Yet, this project idea may not remain just within Germany. GCE student Kun Woo Ro is currently carrying the project idea further to his home country in South Korea. Thus, not only the seedlings in the Bayreuth forest continue to grow, but also the idea of ​​the “Klimawald”.

This text was written for the Elite Network Bavaria.
English editing kindly done by Taylor Blair