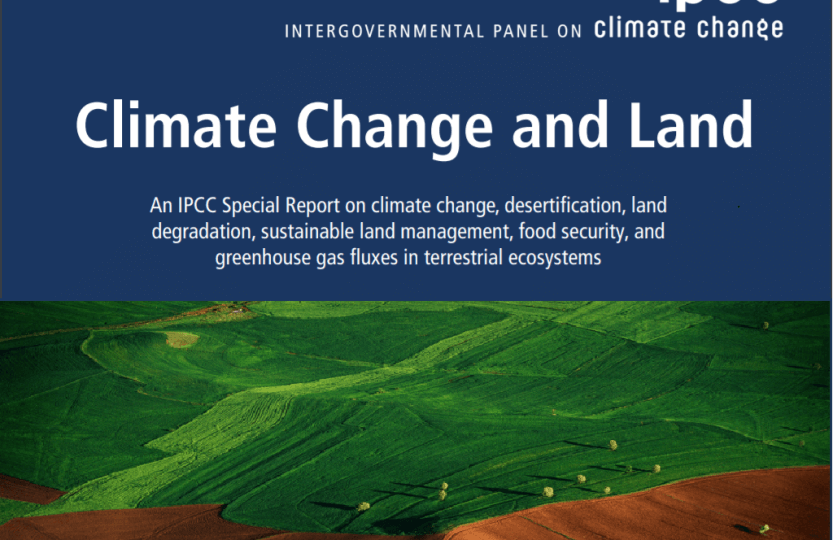 The Climate Change and Land report was published on 9th August 2019. It is the second of a series of three special Intergovernmental Panel on Climate Change (IPCC) reports: the first one was the “Global Warming of 1.5°C”. The third one will be “The Ocean and Cryosphere in a Changing Climate”.

In addition to the fact that it is the first global report on land use, it could also be described as the most ‘inclusive’ IPCC report to date. The report has more contributor scientists from the global south than the global north and 40% female scientists. Simultaneously, this highlights the growing importance of the topic, and the rising interest in the question in the global south.

The body of knowledge on climate change, its causes, consequences and mechanisms is already extensive. I think that what we need is more awareness raising, and more climate action, for a better future for everyone. Therefore, every new IPCC reports is a good occasion to debate the climatic crisis.

Land use and Climate Change

The first chapter is a general introduction to the issue. It presents the scope of the report and the related topics to land use that will be undertaken. Land use describes the activities, arrangements and inputs that humans use to modify the land cover according to their interests and needs. These activities could result in more greenhouse gas emissions in the atmosphere, or on the contrary, result in a decrease of greenhouse gases. Since humans directly affect around 70% of the global ice-free land surface, this issue and its impact on the climate and the climate action is of extreme importance.

Land use and the climate

The second chapter of the report treats the land-climate interaction in detail, building on the accumulated knowledge of the previous IPCC reports. The land use and climate change interactions are difficult to forecast, as they intertwine in a complex net of casualties and action-reaction. Nonetheless, the general trends are well described in the report, as well as their potential outcomes.

The growing human pressure on land is driving the greenhouse emissions to increase beyond the fixed limits to mitigate climate change. Moreover, the land is used more intensively and extensively to satisfy an increasing food demand through agricultural production. Compared to the pre-industrial levels, this caused the mean temperature over land to increase by 1.5°C, compared to the global 1°C increase over land and ocean.

The pressure on the land comes from increasing pressure for resources and agricultural products. for example, since 1961, the total production of cereals increased by 240%. This results in increased land degradation and adverse effects on the ecosystems, and interacts also with the climate.

According to the report, the current changing trends of the climate will have potential benefits to agriculture in high latitude areas, as it will expand the arable lands in the north. But eventually, it will trigger a chain of events (known as feedback loops) such as snow melting and release of methane and CO2 in the atmosphere that will lead to further warming and climate extreme events in many parts of the world. These consequences will negatively affect land use and agricultural production in many areas, such as drylands. This will probably exacerbate the negative land use practices even more. It could also put the food security of large populations at risk.

Chapters 3 and 4 of the report treat the topic of desertification and land degradation. In addition to the study of the ongoing processes and their impacts, they present future scenarios and projections.

Among the consequences of climate change, the intensification of the hydrological cycle will lead to more intense rainfalls which in turn will result in increased soil erosion and land degradation. In dry regions of the world, land degradation will happen because of decreased rainfall and increased warming and leading to desertification. In both cases, it will cause the loss of fertile soil and vegetation. The report claims that a sustainable management of land could prevent land and forest degradation. It would alsod contribute to reversing the negative effects of climate change. In turn, this could support the implementation and achievements of the sustainable development goals (SDGs), and even create benefits for adaptation measures. The three last chapters (5-6-7) focus on food security, sustainable development and risk management. They present useful insights on the current opportunities to limit the adverse effects of the combined land use-climate change effect. They also present how new policies and governance approaches could lead to a more sustainable way of living. That could avoid a climatic worst case scenario, and preserve the environmental rights of future generations.

We are on a crossroad

My take home message from the report, is that the situation of land use is critical. Humans are approaching a crossroad, in which we will have to choose a development path. This choice will have huge consequences on the climate, positively or negatively, and consequently on humanity’s future ways of life.

Accordingly, humans need to adopt a less economist evaluation of the value of lands and land exploitation in general. Perusing pure economic profit-driven interests will only lead to the further degradation of the environment and destabilization of the climate. Knowing that the consequences of such actions will not be distributed equally means that there will be winners and losers.  This leaves no doubt that the current exploitation of the earth and its resources will not change spontaneously.