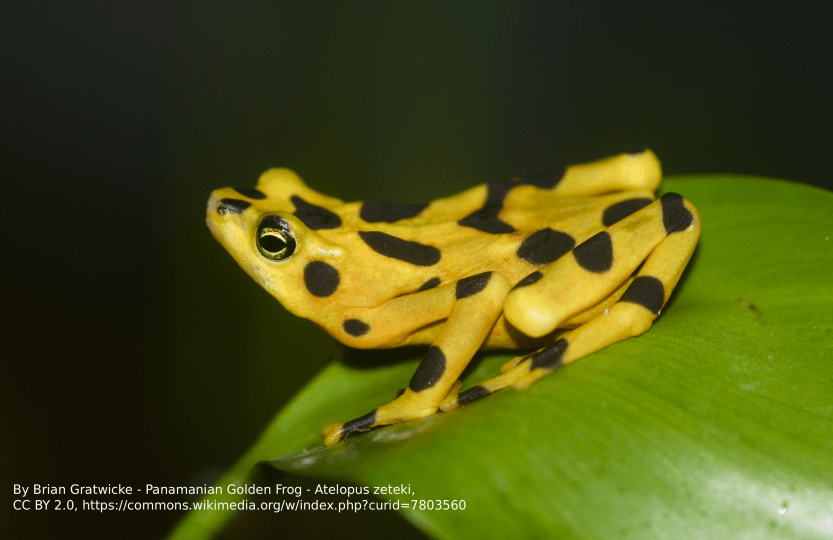 Have you ever heard of the Panamanian golden frog? Or the white-plumed antbird? Probably you’ll never hear about them because they are on the edge of extinction. Fragmentation, the excessive use of land and climate change are just a few of the factors that are causing a major extinction event. Right now. Right here.

But soon, we might have to add another mass extinction to this list. The sixth mass extinction, happening in the Anthropocene, right now. How many percent of the species on Earth will be gone this time? Some authors think the sixth mass extinction event has already begun, others say, we are on the edge. Clear is, we are observing currently a rapid extinction of many species due to human activity: Habit destruction, overexploitation, new diseases, invasive species and climate change are just some of the driving factors.

To define a mass extinction event, one has to look at the extinction rate, specifying how many species go extinct in “normal periods”. These so-called “natural background extinction rates” can be estimated by going through fossil databanks. With there help it can be for example estimated that under “normal” conditions every 700 years one mammal species will go extinct. This changes when a mass extinction event occurs. The palaeontologists Anthony Hallam and Paul Wignall write that “a mass extinction is an extinction of a significant proportion of the world’s biota in a geologically insignificant period of time”. (2) And even if we don’t know whether we are witnessing an extinction event equal to the former five events, one thing is clear: Species are vanishing, faster and more thoroughly than during the last 66 million years.

Journalist Elizabeth Kolbert addresses this issue in her book The Sixth Extinction: An Unnatural History. Visiting places where the ongoing extinction is most evident, she accompanies many scientists in different fields – from the Amazon to Scotland, from small Italian islands to Cincinnati – and writes about their findings. The indications for an ongoing extinction event can be found everywhere.

In the first part of the book, Kolbert addresses some species that have already disappeared: The mastodon, an extinct mammoth species, the great auk, the last individual being killed in 1844 in Iceland, and the ammonites, for their part witnesses of a mass extinction event. Kolbert tells the story how in 19th century certain natural scientists discovered there must have been species roaming the earth that went extinct – a blasphemous thought! Hadn’t god created all species, perfectly adapted to their environment? How could some species just have vanished? It took quite some time until the thought of the extinction species caught on…

In the second part she visits scenes where causes of extinction are most evident. The Italian island where scientists investigate the acidification of the oceans, melting away calcareous shells. The Amazon, where fragmentation causes severe damage and where an enormous project is going on for almost 50 years: The Biological Dynamics of Forest Fragments Project (BDFFP), aiming to find out how fragmentation influences biodiversity. The trees in the Peruvian cloud forest, that are forced to “race” uphill to cope with rising temperatures due to climate change. The amphibians all over the world, dying in thousands because of one fungus, transported everywhere by humans. The list seems nearly endless.

The Sixth Extinction: An Unnatural History is quite an eye-opener, covering all important processes that are contribution to the ongoing extinction. And even though the book is dealing with a serious topic, Kolbert writes in a way that leaves you not thoroughly depressed. Now you know the Panamanian golden frog and the white-plumed antbird. And the more people know about their fate, there is a chance that other species don’t have to go the same way.