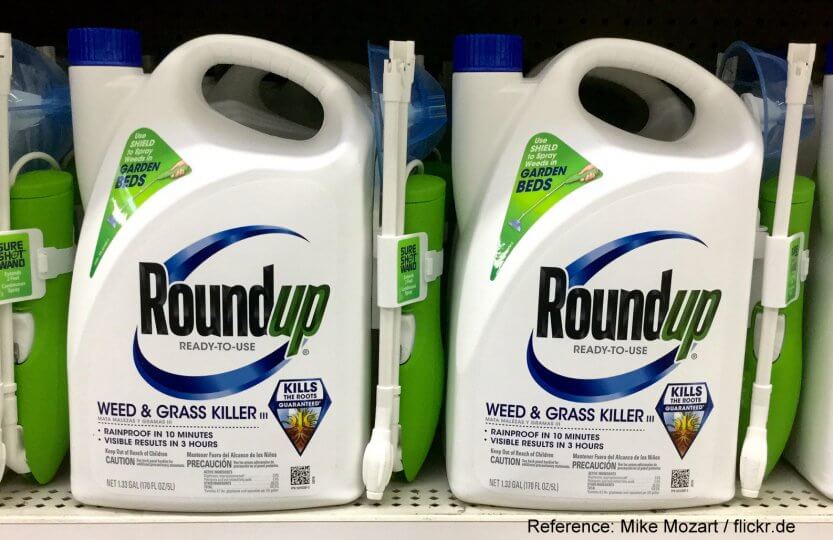 Being a school groundskeeper might not be the most dangerous job. Maybe this was also Dewayne Johnson’s attitude , when he accepted this job in 2012 in a suburb north of San Francisco. But this idea turned out to be wrong: In 2014, Johnson got ill, very ill. He was diagnosed with non-Hodgkin’s lymphoma, which means cancer in the lymphatic system. But what does this illness have to do with Johnson’s job? A lot, apparently: The 46-year old man suspected Roundup, a weedkiller by the US-company Monsanto, to have caused his harm. He sued the company – and won. Monsanto now has to pay 289 million Dollar in damages to Johnson, a jury of the Superior Court in San Francisco decided last week.

It has something of David against Goliath when a normal person wins a case against such an influential and big company like Monsanto. Johnson’s lawsuit is the first to go to trial alleging that Roundup – and its ingredient glyphosate – can cause cancer. The question whether glyphosate, the world’s most widely used herbicide, is carcinogenic caused a lot of discussion over the last years. Some agencies and scientific institutions such as the US Environmental Protection Agency (EPA) and inspecting authorities of the EU concluded that glyphosate is not carcinogenic. On the other hand, the International Agency for Research on Cancer (IARC), an agency of the World Health Organization (WHO) reported in 2015 that glyphosate is “probably carcinogenic”. The discussion on this topic is very heated, emotional and there are a lot of different studies, some indicating carcinogenic effects, others give evidence for the contrary. What is not communicated in many cases is that it is not glyphosate which is thought to cause harm but the constellation of it with other ingredients in the weedkiller Roundup: There are not enough studies on the long-term consequences of the interaction between these substances.

Johnson, the cancer-ill groundskeeper, used to spray Roundup up to 30 times a year in his job. “I never would have sprayed that product on school grounds or around people if I knew it would cause the harm”, he says. Monsanto has been sued to pay the damages because there was no warning on the packaging indicating the substance could cause cancer. Doctors say Johnson will probably not live past 2020 due to his cancer. He has three children and his wife is currently working in two jobs in order to support the family. “After all, I’ve learnt about Roundup and glyphosate, I am glad to help in a case way bigger than me. Hopefully, this thing will start to get the attention that it needs”, Johnson says after the verdict.

Monsanto’s Roundup is a weedkiller used for GMOs (genetically modified organisms). In the past, there have been various cases in which the company and its products have been causing discussions, for example when it became public that several Indian farmers committed suicide due to being indebted after using Monsanto’s crops and herbicides.

The case Johnson vs. Monsanto is not only important in a human-rights based view, but environmental consequences can be drawn from it as well. Until the day of the verdict, Monsanto didn’t have a lot to be concerned about. Of course, there were protests and warnings from environmentalists and scientists, but they never got too serious. Dewayne Johnson didn’t follow this scheme: His case shows that things might have changed, that big companies can not just do what they want anymore, walking literally over dead bodies to pursue their own profit-oriented interests. The verdict against Monsanto might now have opened a new era of debate and shown how important science is. Science was also one of the arguments Johnson’s lawyers used. They argued that Monsanto has “fought science” for years and targeted scientists who warned about possible health risks. The attorneys also got hands on internal emails from Monsanto executives showing that they constantly ignored experts’ warnings, sought favourable scientific results and acted as ghost-writers in research encouraging the further usage of Roundup.

The result of this lawsuit might have disastrous consequences for Monsanto – and thereby also for the German company Bayer who bought the US-group Monsanto last year for about 63 billion Dollar. After the verdict against Monsanto became public on 11th August 2018, Bayer’s stock price dropped dramatically, reaching its lowest value in five years. And there might be more to it: Across the US, more than 5000 similar cases targeting glyphosate and Monsanto are waiting for a verdict.

Maybe this verdict from a jury in California will change the way companies are dealing with people and the environment. Glyphosate is proven not only to destroy weeds but also harm the surrounding plants and having negative effects on biodiversity. Therefore, even though this lawsuit is per se  not connected to environmental issues, it still might be beneficial for nature and biodiversity in the end. Apparently, as it is so often in life, everything seems to be connected.