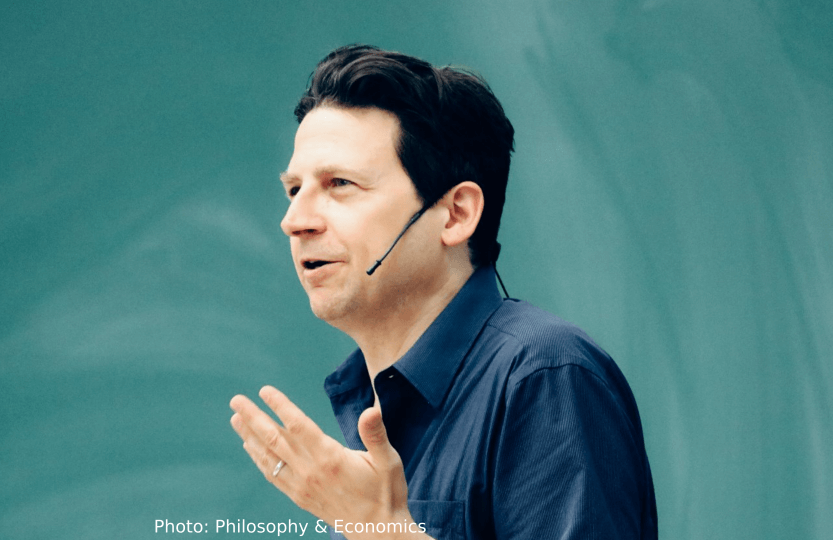 This is the second part of the interview with Prof. Heath about climate change and future generations. Find the first part here.

Could you imagine a world in which we just consume less energy, instead of having better technology?

Well, in my lectures I had some discussion of the limits to growth movement and the idea that we should learn to live within the ecological limits or constraints. I was very critical about it, pointing out, that the thesis is often formulated in terms of resources and the idea that we are depleting sort of non-renewable resources and we should learn to live within our means. But even people who are in this literature, recognize that the issue is actually not about resources, it is all about energy. Because almost any resource that we consume could be recovered and turned back into that resource with enough energy. And that is certainly the case in climate change. We can take atmospheric carbon dioxide and turn it back into fossil fuel – with enough energy. So, it’s all about energy. Then you have to look at how much energy we are consuming and also what the energy budget of the planet is. The most striking statistic in this area is that the total human energy consumption right now on the planet is about 18 Terawatts. The energy budget that is available to us in the form of just solar radiation is over 89 000 Terawatts. Therefore, there is absolutely no scarcity of energy on this planet. The problem is that humans are not very good at harvesting that energy. Most of our energy systems are parasitic upon plants. Plants through photosynthesis are able to capture solar energy and turn it into a high energy chemical bond. And we rely upon that for our food systems directly, but then with fossil fuels we are relying upon that indirectly. That’s all energy that is captured by plants. We capture a bit of it with wind power, and differential heating with solar energy, with water power, like rain and so on, this all comes from solar energy. And of course the direct solar energy. But the amount that we are capturing directly is less than half a Terawatt maybe. We humans apparently haven’t tried very hard. Because plants capture it and that has always been sufficient. We had horses and cattle that ate the grass and then we used the horses and the cattle as our machines to plough our fields and so on. And then fossil fuel got discovered and it’s like: Oh, plants aren’t just doing this now. Plants have been doing this for millions of years and it’s all stored up onto the ground. So, we just discovered this incredible convenient way of harvesting past deposits of solar energy. So, what we have to learn is how to capture ambient solar energy and transform it into a useful form. But the amount of solar energy that’s available is mind-bogglingly large. There is a kind of purity about that we should just learn to live within our means or learn to live with less energy. That’s actually like saying: You should learn to use less water. And in Canada, there is water everywhere. This planet is not lacking water. And anyway, there is no reason to learn to use less water if you can do desalination and stuff like that. So, water is plentiful. There is no reason why we should have to limit our consumption of water. But similarly, energy is even more plentiful than water. And there is just is not any principled reason why we should have to use less of it rather than more.

Except for the point that we are not able to harvest the solar energy efficiently right now.

A lot of the debates of the limits to growth and lot of the discussion about environmentalisms – what they really come down to, is optimism versus pessimism about human ingenuity. About whether or not people are kind of clever enough to figure how to do these things, whether or not the rapid technological progress that we have seen in the last two hundred years can continue. And I am an optimist.Let’s use China as an example: you have a country with a billion people, many of them very, very smart. If you look at the innovations about technology – it’s almost all come from the Western countries, from Europe and North America, and the amount of technological innovation that has come from other parts of the world is extremely small. Largely just because of development. As other countries are developing – which they are – then more humans are available, more people will have scientific and technological training to think about these questions.  If China started being technological innovative that would just transform the human condition. So, I just don’t see the case for pessimism.

Do you think there are also implications for every single one of us?

Yes – and I like to emphasize that because sometimes I talk to students and activists, who sometimes want to treat climate change as though it is one of these bad guy stories of corporations wrecking the world. Students at my university are trying to push for a boycott of oil companies, as though climate change is caused by evil corporations. And I like to point out to them that there is a fact of the matter as to whether or not large social problems are caused by corporate misbehaviour or not. For example the 2008 financial crisis was caused by corporations, there was nothing in the world or in the average person’s behaviour that contributed to their crisis. It was the fault of the banks, in part because of the bankers having inappropriate incentives. That is something you can actually blame corporations for. But climate change is something that every single one of us contributes to, with few exceptions. But every single one of us, living in a first world country contributes to it, because every aspect of our life relies upon energy that relies on fossil fuel. Therefore every single person can do something about it because every single person is complicit in the problem. Other than in the financial crisis where I actually couldn’t do anything about it. With climate change we are all guilty and that’s actually why everyone of us should do something about it.

Do we have a moral obligation to take the wealth of future generations into account, when thinking about climate action?

That’s a very complicated philosophical question, that many people have treated as though it were an easy question. The easy answer is yes. But, if you do that in a too simplistic way, it can actually lead to really absurd implications on the policy front. The reason why there’s a philosophical topic here is that it is not obvious, like we should fix this problem. The reason it’s a philosophical problem, is that question turns out really complicated. What I did over the course of the five lectures was actually to address that kind of problem, in order to show how difficult it is. My answer would be very nuanced and complicated and therefore is probably not worth trying to summarize in one sentence.*

* Here you can watch the livestream of the lectures to learn more about moral obligations to future generations.

Last Question: Can you explain briefly why there should be a discount rate?

That’s actually the thing that people from the sciences have the greatest difficulty understanding. It’s very typical for people with technological education. The same issue comes up with the construction of roads for example. Engineers want to build everything out of concrete because that’s the best way to build. It’s the most durable, it’s the most long lasting and so on. So, they submit all the plan of how they want to build the road and then it goes into the accounting office of the local municipality where some accountant then applies a discount rate. And when it comes back, the road gets build out of asphalt. And it drives engineers crazy because they prefer concrete. The problem is that concrete has this higher upfront cost with lower maintenance, whereas asphalt is cheaper to build now but has higher maintenance costs. So, it looks like it’s just a false economy. The discounting thing is actually the most common source of disagreement between people who look at things from a more scientific/technical way and people who look at it from a more economic and social science perspective. There should be a discount rate and there are a variety of reasons. The simplest reason for why there should be a discount rate is simply the fact that people will be richer in the future than people in the present. And as a result, cost is simply not as significant in the future as it is now. The municipality is having to repair a road in ten years. If there is economic growth that means the municipality is going to have more tax revenue in ten years than it has now. And so a million-dollar liability is less of a concern if it can be delayed for ten years. That’s just sort of rational accounting. It gets more complicated than that, but that’s the core rationale for a lot of discounting. And that’s the least controversial aspect of discounting. That is actually a major point of contention. When it comes to climate change, a lot of the people of earth sciences focus on the consequences and don’t see that, in order to translate that in a policy you have to add in a number of other factors that make it more complicated. Economic growth being one factor and what the impacts of economic growth are to the human capacity to adapt to climate change is a major factor. So, you have to be able to have a model that predicts that. And you have to figure out what impact it is going to have on discounting. There is a lot of frustration and I understand the frustration a lot of people in the natural sciences feel discussing how we should respond to climate change. But it is important not to be too propria about the science. Science contributes one piece of the puzzle. But there are a bunch of other very important pieces s well.

Thank you very much, Prof. Heath!

*** Find all pictures and the stream of the Wittgenstein lectures on the facebook page of the study programm “Philosophy and Economics”. https://www.facebook.com/philosophyandeconomics/ ***