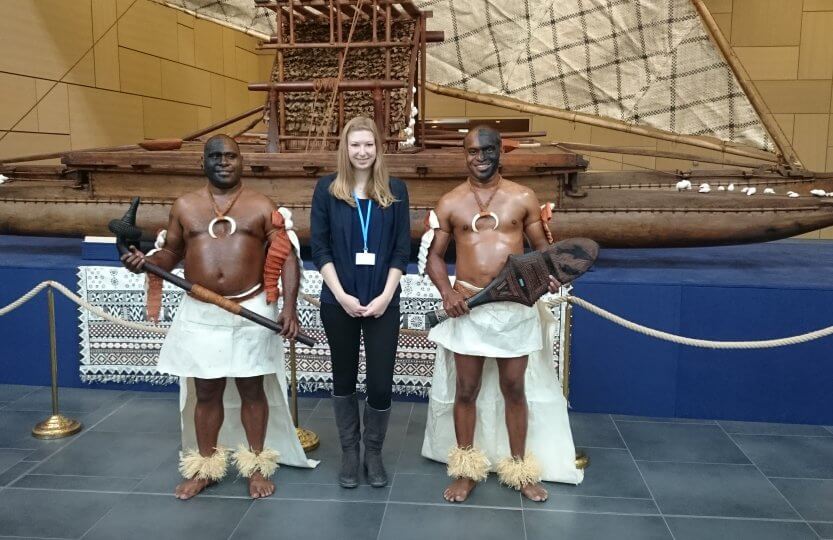 After yesterday’s touching opening ceremony, which was enriched by performances by children and indigenous Fijian people as well as motivating speeches, the second day of the United Nations Climate Change Conference 2017 continued with the central agenda: preparing the implementation of the Paris Agreement.

First, some good news: observers are generally welcome in most of the sessions and the Fijian COP presidency seeks an open dialogue with non-parties to the convention, as their contributions will be crucial to achieving the climate target set in the Paris Agreement.

“We are all in the same boat.” – COP president Frank Bainimarama

The statements given during the first two conference days emphasized the urgency of our situation and called out for solidarity as well as effective, efficient, and immediate climate actions.

This year’s natural disasters, like South Asian monsoons or hurricanes in the Caribbean, have demonstrated that humanity is already facing impacts of climate change. In one of the side events, a Fijian woman narrated on how the Pacific small island states are suffering from the consequences of the anthropogenic greenhouse gas (GHG) emissions which they themselves did not cause. For that reason, Frank Bainimarama, the newly elected COP president, stressed that: “We are all in the same boat.”

This metaphor is visualized in the World Conference Center in the form of a Fijian canoe.

“We need to have a collective response to loss and damage, especially for these developing countries.”
– Timor-Leste delegate

In one of the negotiations, the Palestinian delegate underlined this moral attitude by stating: “No one should be left behind”; this sentiment is supported by the least developed countries’ (LDCs) representative.

“Climate change, if we do not act immediately […], there will be no return.”
– Ambassador Aziz Mekouar

A recently published report by the World Meteorological Organization (WMO) explains how urgent the demanded joint climate action is. 2017 will be among the three hottest years on record, even though we are no longer witnessing El Niño conditions. The temperatures in January to September were 1.1°C warmer than the 1880-1900 average.

Even more alarming, our recent efforts have not been sufficient. According to a UN Environment report the pledges made in the Nationally Determined Contributions (NDCs) only fulfill one-third of the Paris Agreement target and would lead to 2 to 3°C warming in comparison to pre-industrial temperatures. Petteri Taalas from the WMO warns that time is very limited to change our behavior.

I leave the second day at COP23 overwhelmed by the amount of people attending this conference and the common will to combat climate change. I hope that within the upcoming days, the delegates will find consensus on how to implement and finance the ambitious goal that they agreed upon in Paris, 2015.