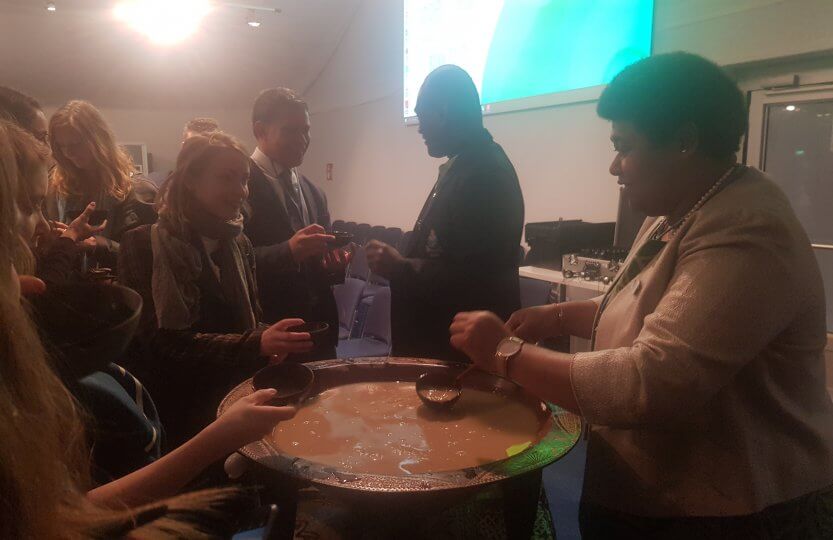 “It’s the first Presidency Open Dialogue at the COP. It’s not a side event…today, we will not negotiate, we will talk to each other and we will listen to each other…. there would be good experiences to share. It’s about contributing to solutions.”
– COP 23 President Frank Bainimarama

Today, COP23 President Frank Bainimarama encouraged an open and honest dialogue during the opening of the first-ever Presidency’s Open Dialog at the COP.  Following his welcoming remarks, the secretary of the UNFCCC, Executive Secretary Patricia Espinosa, highlighted and expressed appreciation of this first dialogue, because we “all share the same emergency of  implementing the Paris agreement” and, consequently, such dialogue “is crucial to advancing the discussion….it requires the participation of everyone.” She reaffirmed the determination of the UNFCCC secretariat to support such dialogue in the hope that all parties will propose solutions that can feed our common agenda.

“We all share the same emergency of  implementing the Paris agreement.” – UNFCCC Executive Secretary Patricia Espinosa

The Presidency’s Open Dialogue, which offers a unique opportunity for parties and NGO constituencies to directly interact with each other on concrete issues of the negotiation process, was extensively discussed in May 2017 at the forty-sixth session of the Subsidiary Body for Implementation (SBI), where it was in FCCC/SBI/2017/7  §119 that “(…) any outcomes of such a dialogue should have persuasive value only, respecting the Party-driven nature of the UNFCCC process; (…).”

This first Presidency’s Open Dialog was held under the Chatham House Rule, meaning that participants are free to use the information received, but neither the identity nor the affiliation of the speaker(s), nor that of any other participant, may be revealed. The first part of the dialogue focusing on NDC (nationally-determined contributions) enhancement and implementation, was guided by three main questions:

1) How can Parties and non-Party stakeholders (NPS) collaborate with each other on enhancing and implementing NDCs?
2) How can NDCs be improved?
3) How can NPS best actively contribute and feed into the Talanoa dialogue in 2018 both directly and indirectly?

For around one hour, the floor was given to Parties and non-Party stakeholders to tell their national stories and give their point of view concerning the aforementioned questions.

Following this roundtable discussion (and in the spirit of the Chatham House Rule) the recommendations of the Parties and NPS were given. Listed below are a few critical points:

1) Human rights and Gender as a key priority in the NDCs
2) Better development of the financial aspects of the NDCs
3) Revised mitigation targets as a result of the Talanoa Dialogue in 2018
4) More collaboration among Parties, technology transfer, education, and capacity building
5) Inclusion of the traditional and local knowledge in the dialogue

Lastly, Parties and NPS expressed their desire to have such open, fair,  equitable, creative, and constructive dialogue on a regular basis every year, delivering the outcome in the form of a press release or communication.

In the second part of this Dialogue, the focus was on enhancing admitted observer access to and participation in formal meetings. During roundtable discussion, Parties and NPS proposed possible solutions to further increase opportunities for admitted observer organizations to make interventions in plenaries.

At the end of the day, three keys attributes were proposed by the Chair of the SBI for a successful dialogue: attendance, discussion and the question of if the future presidency of the COP will hold the dialog next year.

The first Presidency’s Open Dialog ended with a Fijian ceremony during which Kava, a traditional drink, was offered to all participants by the Fijian delegation.