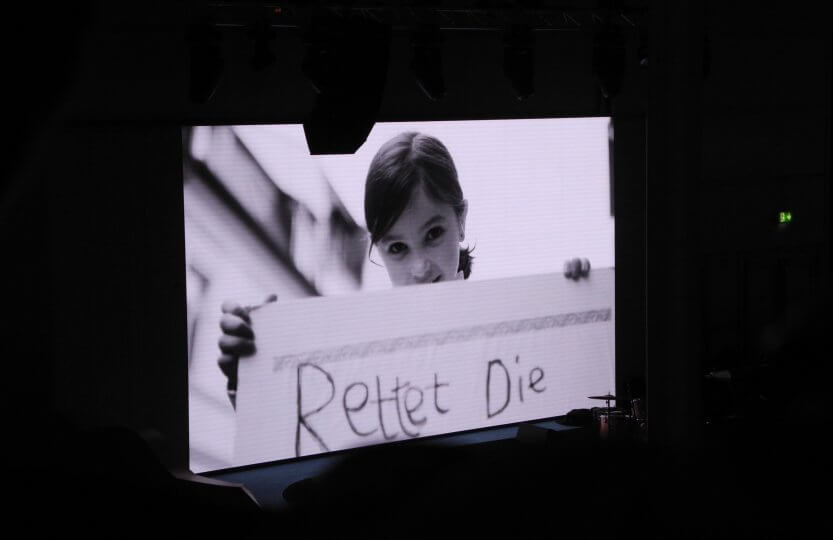 In 1992, during the Earth summit in Rio de Janeiro, a 12 year old girl gave a speech “for all the generation to come,” telling the present leaders:

“ We are your own children.
You are deciding what kind of world we will grow up in …
Are we even on your list of priorities? “

Similarly, today’s opening ceremony started with a procession of kids with signs that read: “Save the world”. They performed a song entitled “I am an island”, stressing our connectedness.

The exiting COP president gave the first speech, underlying the cost of not acting and how ambition, solidarity, and action are the principles the COPs are based upon. The priority, he said, are the young people–and history will remember us for what will be able to deliver.

The new COP23 Fijian president was then given the seat, and as is tradition, a kava ceremony was performed and offered to the Minister of Environment, Barbara Hendricks.

As observers, we were not permitted to enter the open ceremony, but we watched it by screen in a room close by. Despite the fact that today’s attendance was lower than expected, the rooms and the halls felt filled with people (with women and men apparently equally represented) from all ethnic groups.

I participated in different press briefings, which bitterly discussed the delusion of the USA’s withdrawal. Despite this, US cities, municipalities and citizens are still acting and supporting the Paris Agreement. The power of change is in all of us.

In the final speech I attended, a young girl, together with other children, filed a lawsuit against Trump to reduce the carbon input, asking:

“… not to leave a mess for young people to clean up.”

She stressed again that the work being done here is for the future generations.

I came out of this first day of meeting motivated to engage more for our planet’s future, both as a “young research” and, maybe even moreso, as a woman.