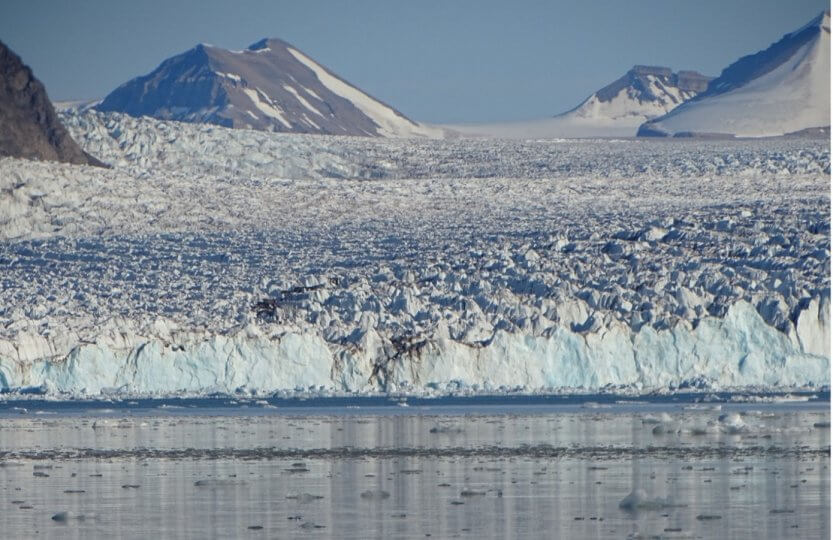 As part of a Master’s course at the University Centre of Svalbard, I spent five weeks on Svalbard, a Norwegian archipelago in the High Arctic. The University Centre in Svalbard (UNIS) is the world’s northernmost higher education institution, located in Longyearbyen at 78º North, only about 1300 km from the North Pole. UNIS offers research-based education in Arctic Biology, Arctic Geology, Arctic Geophysics, and Arctic Technology. The course focused on the thermal conditions of glaciers and the dynamics of glacial, hydrological and biogeochemical processes.

During the course, students learned about Arctic glaciers and melt season dynamics, and engaged first-hand with the topics via field trips. After a few introductory lectures at the university, we spent most of our time in the field investigating and studying different glaciers and proglacial areas.

Fieldwork in the Arctic takes place under special conditions. Besides the dangers of rugged terrain coupled with frigid water and air, one must also be aware of polar bears across the island. Therefore, we underwent an intense two-day Arctic safety training prior to the course and short safety briefings before each excursion. Since it was Polar Day and thus permanently bright, there was no need to worry about darkness during our trips.

The course was very exciting. We learned a lot out in the field and had very knowledgeable professors teaching us. Besides general knowledge about the cryosphere on Spitsbergen, we were also taught about the local impacts of climate change. It was alarming to learn how fast the processes are changing and how strong the impacts are. A few years ago, the fjord was frozen in winter and could be crossed with snowmobiles. This is not the case anymore, as it is now too warm. Many glaciers have lost a lot of mass – some are only fractions of their previous size. Mean summer and winter temperatures have increased considerably and precipitation patterns have been increasingly switching to rainfall instead of snowfall. Now, the melt starts earlier, and water freezes up later. Nevertheless, there were still some very large and well-preserved glaciers. It was impressive to see them and to do our fieldwork there.

I am glad that I had the opportunity to take part in this experience and study in the Arctic, surrounded by such a fascinating landscape and its incredible wildlife. I was lucky enough to observe a lot of Svalbard´s wildlife. Besides four polar bears (fortunately from a distance), I saw many Svalbard reindeer, Arctic foxes, and birds. On various boat trips, I observed minke, beluga, and fin whales – sometimes in overwhelming large groups.

The photos in this post have been kindly shared with us by the author, Karina Krapf.