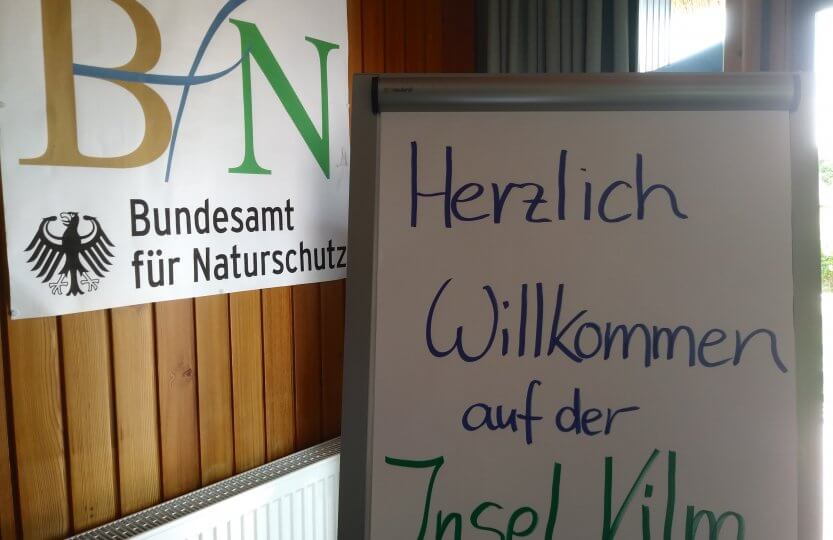 This August, an interdisciplinary science meeting on biodiversity research took place on the Isle of Vilm. It was not just the meeting but also the isle itself that helped the participants to understand biodiversity better.

On Monday, the 2nd of August, 2021, my alarm clock rang early in the morning. It took me around 9 hours to travel by train from Hesse to Ruegen, Germany’s largest island in the North-East. After arriving, I was happy to find myself on the second to last ferry boat of the day from the Island of Ruegen to the Isle of Vilm. After another 20 minutes running time, the other passengers and I took our first steps on the isle. The passengers were young academics who participated in the “interdisciplinary science meeting on biodiversity research under the UN Convention on Biological Diversity (CBD),” which was organised by the “International Academy for Nature Conservation Isle of Vilm” (INA). The INA is part of a branch office of the German Federal Agency for Nature Conservation (BfN), which is one of the government’s departmental research agencies and works in the area of responsibility of the German federal environment ministry. The interdisciplinary science meeting takes place every summer and mainly addresses bachelor´s, master´s and Ph.D. students. Mrs. Stadler, the meeting host, warmly welcomed the students and showed the way to the reception desk. Along the way, a big information board close to the harbour provides every arriving guest with information on the fascinating history of the isle:

I was happy and grateful to be one of those participants this year.
After the registration, everyone looked for their assigned house. Every house consists of several guestrooms. I was the only one at my floor because of the corona situation. After dinner, the meeting started. The programme began with an introduction, followed by a presentation about the involvement of youth and young adults in international conventions.
On Tuesday, Prof. Dr. Volker Mosbrugger gave the first presentation of the day. He mentioned some surveys and reports like the IPBES Global Assessment Report (GCE students directly reported from IPBES 7 where the report was adopted) which document the ongoing biodiversity crisis. The professor stressed that there is still much unknown in biodiversity and presented the “Research Initiative for the Conservation of Biodiversity” of the German federal ministry of education, which aims to close some of those knowledge gaps.
Afterwards, each participant of the meeting presented his or her current scientific project for 20 minutes, followed by ten minutes of discussion. The topics were wide-ranging and interdisciplinary but always with a reference to the CBD. I presented some of the results of my master´s thesis, “The accountability of biodiversity strategies at the level of the Convention on Biological Diversity, European Union and the Federal Republic of Germany,” which I had done at the Helmholtz Centre for Environmental Research (UFZ). Some topics that other participants dealt with included the wild harvesting of medicinal plants, agri-environmental policy in Bavaria, effectiveness of UNESCO biosphere reserves, environmental ethics, wild mammals in urban areas, sea use planning, and knowledge of species.

After lunch, Mrs. Stadler offered an isle tour. Because most parts of Vilm are covered by the core area of the biosphere reserve, there is only one path which leads around the northern part of the isle and guests must not leave it. Mrs. Stadler explained that animals like deer could migrate from the Island of Rugen to the Isle of Vilm (that is even smaller than one square kilometre) when the water is frozen in winter. However, the distance would be too long for smaller animals like squirrels. Our meeting host emphasised the enormous diversity of ecological conditions on that isle by giving the following example: Grapevine snails can be found on one side of the isle, but not on the other side. The reason is that one side of the isle has some lime that offers a favourable environment for the snails, whereas the other side is too acidic. I was impressed by all of the deadwood and old trees, which can rarely be found in German forests. However, the forest of Vilm cannot be considered a virgin forest in the strict sense because it was used by humans in the past. Mrs. Stadler showed us the oldest tree on the isle at roughly 600 years old. However, the tree is not alive anymore.

On Wednesday, the presentations continued.
On Thursday, the 5th of August, 2021, the meeting came to an end. After breakfast, the ferry boat brought us back to the Island of Ruegen.
After the meeting, every participant was invited to submit a short text on his or her scientific project. Those contributions have been collected by the BfN and will be published in a BfN script soon.
I liked the meeting very much. The programme was dense and demonstrated the highly interdisciplinary subject of biodiversity with all its input. Besides the presentations, it was refreshing to talk to so many young and motivated people after a time of corona lockdowns. And, finally, it is worthwhile to visit the Isle of Vilm, with its fascinating history and nature. The Isle of Vilm is not just a place to talk about the conservation of nature – it is a place to show how nature develops if nature is allowed to be nature.

If you are interested to participate in one of the next meetings, regularly have a look on the homepage of the INA.