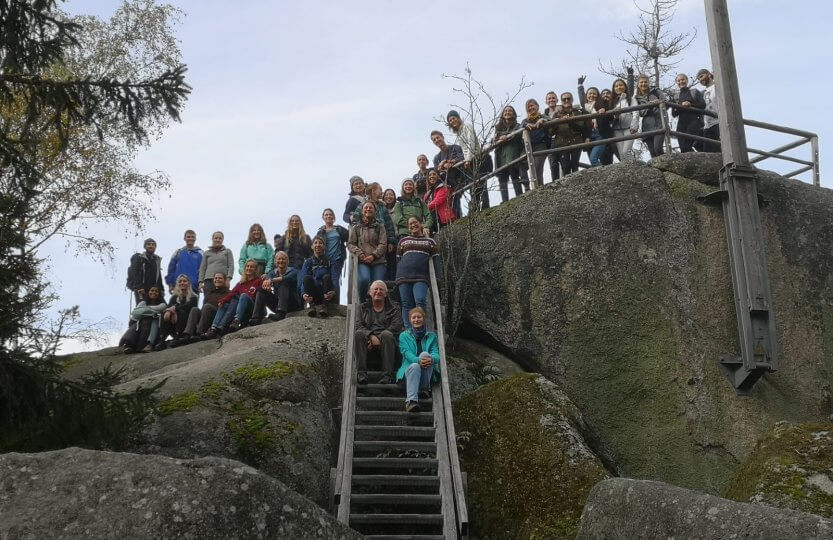 At the end of a week full of informative and fun events for the new GCE cohort, all GCE students were invited to go on an excursion with Prof. Carl Beierkuhnlein. We visited various places in and around the Fichtelgebirge, and learned a lot about the area’s geology, flora and history.

When the excursion started at 8am on Friday morning, we drove off into the fog. By the time we reached our first stop – a volcano named “Rauher Kulm” in Neustadt am Kulm – the fog still hadn’t cleared. Nevertheless, we walked up the volcano and climbed the look-out tower. Apparently, the view from up there is usually great, but we had to use our imagination to see the surrounding Fichtelgebirge behind the wall of white fog. In spite of that, it was an interesting stop, as we learned about the geology of the basalt mountain, which has never erupted, and the surrounding vegetation.

The next stop was an information center at a former extra-deep drilling borehole. Here the continental deep drilling program of Germany (KTB) was conducted. The aim of this research program was to analyze the continental earth crust at this location. The researchers wanted to drill down to a depth of 10 km, but in the end they were only able to reach a depth of 9.1 km. The main drilling was conducted from 1990 to 1994. Nowadays the location serves as an information center about the drilling, general geology, and earth system processes. We watched a short movie and visited the exhibition on the earth system at the information center.

Following in the footsteps of Goethe and Alexander von Humboldt, we visited the “Felsenlabyrinth Luisenburg” in the Fichtelgebirge. The boulder field of granite stones has developed over long time spans through weathering and erosion processes. In German the particular form of weathering, through which the well-rounded giant boulders developed, is called Wollsackverwitterung (English: spherical weathering/onion skin weathering).

We climbed up steep steps and hiked through narrow gaps in the rocks. By now the fog had cleared and the sun was shining, so we had a great view from the top. On our hike through the rock labyrinth, we found a fascinating species: the luminescent moss (Schistostega pennata), which grows in cracks and between rocks.

Before heading back to Bayreuth, we had the opportunity to visit an old farmhouse (currently a museum), where we could see how people used to life in this region. Although it was unfortunate that the museum was already closed by the time we arrived, we could still have a look at the traditional herbs and the vegetable garden present there.

The excursion gave a nice teaser of what Bayreuth’s surroundings have to offer and provided a good chance to catch up with friends and meet new students. All in all, it was a great start to the new semester!