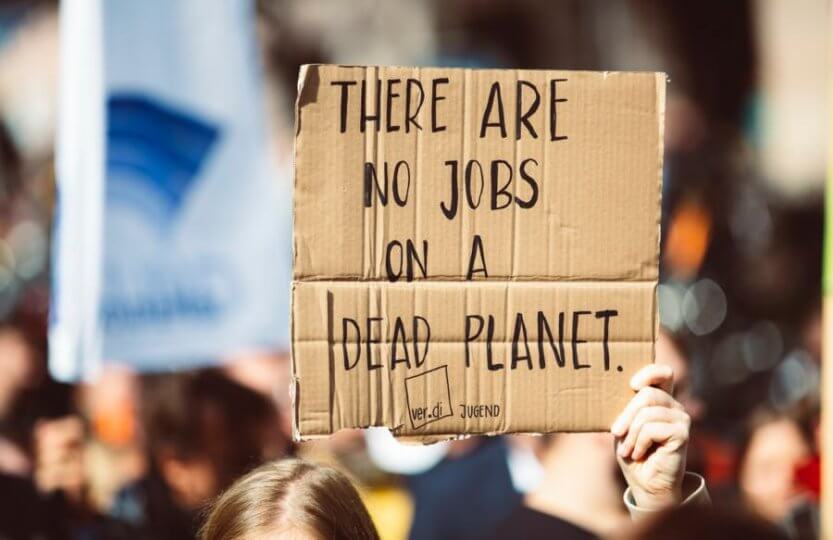 Maybe the expression “Green New Deal” (GND) reminds you of this vague idea about the progressive wing of the US Democratic Party and their ambitious plan to transform the wealthiest economy of the world into a green economy? Well, if this is the case, you should know that the “Green New Deal” does not specifically refer to a particular political program and even less to the American one. There are many initiatives out there in the world calling themselves “Green New Deal”. Where are they? What makes a political program a green new deal? And why this name at all? In this blog entry, I will share with you what I know and think about the topic, and why it is relevant in the current climate crisis context to read more about it.

First, let’s have a look at the origin of the concept.

The Green New Deal borrows its name from the “New Deal” economic program that was enacted during the 1930s in the United States by president Roosevelt after the Great Depression. It aimed for rebuilding the United States’ economy, reducing unemployment, and reforming the financial system to avoid future major crises. The presumed success of the New Deal in ending the great depression, although contested, and the fact that many of its programs laid the foundations of the US social welfare system, gave its title the eminence it enjoys until now. A New Deal also evokes a new beginning and possibly, a fair and right one.

In a somehow similar context, the idea of a “Green New Deal” emerged in the wake of the last financial crisis of 2007. It came about in the American press, advocating for investments in renewable energies, energy efficiency, and the reduction of CO2 emissions. Since that time, the idea was reclaimed in different countries by different political parties, movements and organizations.

In 2009, a report titled “A Global Green New Deal” (GGND) was prepared for the United Nations Environment Programme (UNEP) by Edward Barbier.This GGND was articulated around three main points: Revive the world economy by creating employment opportunities while providing protection for the most vulnerable people. Reducing carbon dependency and resource degradation. And lastly, moving forward with the Millennium Development Goals.

Although the origins and scopes of these different projects and ideas are very different, they converge on two major points. The first one is the imperative energy and environmental transition needed towards a more sustainable, less polluting and wasteful economic system. The second point is providing the economic security and welfare to the people who will be primarily affected by this transition.

The ideas of the GND made it to the public debate nearly a decade later. But there isn’t just one GND. There are different competing initiatives and groups. And even if the projects revolve around the same core ideas, there are many differences that could change the outcomes of the projects completely, in the extent and speed of implementation of the planned transition, and how it is going to unfold economically.

In the following, I present the main projects in the two biggest economies of the world.

A progressive fraction of the US Democratic Party has adopted the Green New Deal as a political program for the next elections and seems determined to rally the whole party under its banner. The most prominent figures in this movement are undoubtedly the young US senator Alexandria Ocasio-Cortez and Bernie Sanders. Until now, their GND is rather a set of sweeping proposals about phasing out the use of carbon energy and greenhouse gas emissions by 2030. This would be achieved by investing massively in green and renewable energies, highly skilled jobs, and social justice measures. To follow detailed updates from the GND, you could check this news stream from Vox.

But this should not hide the fact that a GND was also the title of the political program of the Green Party in the US for the last elections. Both projects seem to agree on the necessity of transitioning to a 100% renewable energy system by 2030 and on investing massively into the creation of green jobs. However, this is not to the liking of many other groups. The Republican Party, for example, opposes vigorously such proposals for different reasons ranging from considering such an orientation bad for the economy to denying both man-made climate change and the merits of climate mitigation investments. On the other hand, not all democrats believe the GND is a good idea either. For example, some key figures in the party think this 2030 planned transition is not feasible, and if initiated, could backfire on the undertaken climate efforts if it initially results in disappointment and frustration.

The US civil society is also highly mobilized towards climate action. In January 2019, more than 600 environmental organizations published an open letter to the Congress urging it to act on key points that describe a GND, even if the letter does not explicitly mention it.

But with Donald Trump in power, a GND is not likely to see the light of the day anytime soon. He has already backed off from US international commitments for global climate action by finalizing the pulling out of the Paris Agreement in the beginning of this month. This not only makes the way to the GND, but also to the success of the global climate action, go necessarily through the White House.

Things seem to be much more optimistic in Europe. The first point of the newly elected EU commissioner’s agenda, Ursula von der Leyen, is the commitment to a European Green Deal. This might look surprising as she comes from a conservative political party (the Christian Democratic Union of Germany). But in Europe, and especially in Germany, the environmental and climatic questions do not seem as cleaving between conservatives and progressives as in the US.

Overall, the key announcements describe the highlights of what would constitute a GND. The new President of the European Commission is determined to uphold theEU’s 2030 engagement to the Paris Agreement, and has the ambitious plan of making Europe a climate neutral continent by 2050. Also, the agenda announces the intention to invest heavily in climate finance, setting the course towards a circular economy and clean technologies. Of course, the economic backbone of this agenda will be “an economy in the service of the people”. Of the announced measures, many highlight a leaning towards a fairer economy and a just transition in a market system reconciled with the European societies.

To achieve this agenda, whose detailed program should be proposed within the first 100 days of new commissioner in office, von der Leyen will face strong challenges.

Indeed, not all European states are enthusiastic about the climate-neutral continent objective, and three states already officially formulated their obstaining position. Additionally, even if the Paris Agreement objectives are respected, not just by the EU member states, this is not very likely to limit the warming at the hoped 2°C threshold. Therefore, many environmental movements in the EU are dissatisfied with the pledges and current policies, and are requesting stronger efforts in climate action. For example, some groups wish to discontinue further developing the coal industry, whose economic viability is less promising, even without mentioning its disastrous effects on the climate.

The Green New Deal for Europe (GNDE) is a more radical GND recipe. The newly founded campaign is advocating for an even more ambitious plan, and they deem their 10 pillars the basic minimum a GND should have, otherwise, it is not a real one. These pillars question dogmas like endless economic growth and promise a bottom-up transition that will empower the people in Europe economically and politically. The campaign aims to limit global warming at 1.5°C, an objective that few think possible anymore. Interestingly, this initiative is the first that acknowledges the global scale of the challenge and calls for supporting climate justice around the world.

What I think about GNDs

Apparently, GNDs have become the progressive way of framing current political problems to respond to the actual challenges. However, not all GNDs are alike. And I guess history is full of stories of very good political programs that were not put into action.

I am not saying this to claim that GNDs are some political maneuvers that shouldn’t be taken seriously. Quite the opposite. I think today’s environmental challenges, especially climatic ones, are inextricable from the globalized market economic system. Hence, a GND is the right way of formulating both the problems and the preconized solutions. But what I find difficult to understand is the limiting of the scope of the analysis, and the dealing only with one part of the problem.

To give some concrete examples, I think that in our current context, problems and solutions should be formulated in their globalized scope. As it makes sense to argue for limiting inequalities within a single country or continent and adopting social measures, a globalized response to climate change should also take into consideration power structures and economic inequalities between the Global North and Global South, and try to develop new partnerships that would conjugate global climate action and set-up a more sustainable world.

I also find it disappointing that there are no signs of a deep questioning of the causes that led to the current problems. For example, neither the EU’s nor the Democrat’s GNDs plan to limit military expenses or their militaries‘ subsequent pollution and greenhouse gas (GHGs) emissions. For those who don’t know, the military activity is the most polluting on the planet with the heaviest GHG impact. The US army alone, for example, has a larger carbon footprint than most countries in the world.  Both the EU and the US could play a major role in leading the way to a less militarized world for many good reasons, not just the climate’s sake. But this does not seem to be the priority.

Therefore, I think that reaching a consensus on, or adopting a green new deal or not, is not an end in itself. I see it more as a path dependent process that opens new possibilities and shuts down others. We should be mindful about what each path entails, what could be brought up in the discussion, what we see most important to contribute, and hope for the best.