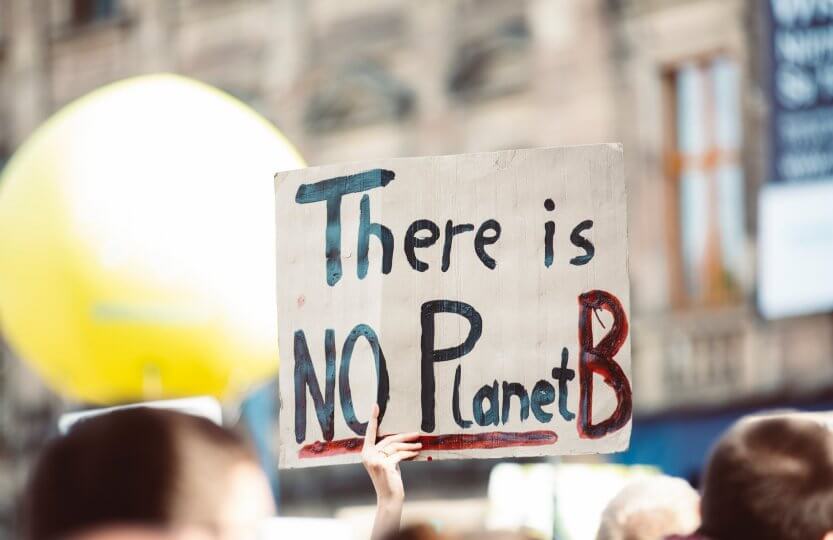 When I considered writing about climate change related anxiety, my motivation was purely personal. I wanted to share my concerns on the blog with you, and maybe gain useful insights on coping with this emotion and understanding it better. more and more people feel scared by the dark horizon of the unfolding climate crisis. And with that, many studies, articles, reports, and books are published about how our mental health is being affected. This post does not aim to add up to a long list of articles selling “the 5 key strategies to live with climate anxiety”. Instead, it aims at shedding some light on climate anxiety, and approaching it from a broader perspective.

The word anxiety has a negative one connotation. In its daily usage, it refers to the irrational fear of something that will not necessarily take place. A paralyzing fear that hinders people from living their lives in a normal way. Wikipedia defines it as “the subjectively unpleasant feelings of dread over anticipated events, such as the feeling of imminent death”.

After reading and reflecting on the topic, I am not sure anymore if climate change anxiety is a negative thing. And this is why… 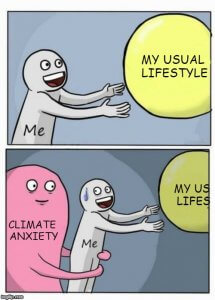 Is it a perception problem?

Sometimes, rationalizing our fears leads to terrible appreciation mistakes. Anxiety is a subjective or a personal fear. But this does not necessarily mean that this threat is a fictional or a trivial one. In my opinion, in the case of climate change, this could even lead to denying scientific facts or to taking hostile positions against climate activists, to make oneself feel better. However, many people do not realize that the hottest five years on record are the last five years. Even worse, 24 million people were displaced because of climate change related extreme events in 2016,. These are rather staggering facts that need us to pause and think for a while. There is more than just subjective perception or an alarming discourse that is problematic about climate change.

There is a real big fat problem, and anxiety seems like an involuntary reaction to it. Actually, anxiety is a normal and healthy reaction in the face of danger. As climate change is not the first threat of this magnitude lurking human societies. We could even seek out for meaningful comparisons. In the past, many major crises had negative effects on the mental health of entire populations. I could think of economic crises where people feared losing their jobs and wealth, and the disintegration of their families and communities. Wars and the threat of imminent violent conflicts are also traumatic events that influenced the mental health of millions, because of the violence, the loss of the loved ones and the destruction. Another extreme example is colonialism. The French revolutionary psychiatrist Franz Fanon studied its ravaging effects on the mental well-being of Algerians upon independence.

Although some resemblance between those examples and climate change as global problems makes sense. One key point has a crucial influence on their perception and is, in my opinion, quite unique. In the three examples mentioned above, a positive horizon was still possible. Reaching it was a matter of time and efforts. One could hope for an economic recovery after a crisis, peace after war, and liberation after colonialism.

This is not the case for climate change, where a positive ending is not possible. Our climatic system is threatened of irreversible deregulation because of the emitted greenhouse gases that are a direct effect of our way of life and consumption. Once this tipping point of deregulation is reached, there is no way back to “normal” (meaning what we consider as normal today). Densely populated parts of the earth will become inhospitable to human life, and the subsequent conflicts over resources will be exacerbated to a point difficult to imagine. Not to mention all the direct victims due to extreme climate  events, whose frequency and intensity is very likely to soar.

Did you say ecoanxiety?

Today, any person with a basic understanding of the climatic crisis should be concerned. Even if what they relate with climate change is completely different.

In my private conversations with friends and relatives, I noticed that for some people climate change has very direct and local consequences. It could mean for example not being able to ski in winter anymore, or the decrease in the level of the river or lake where we bath in summer. In some cases it materializes in the threat of the rising sea level that will destroy one’s city, but does not go far beyond that. For some other people, who may not feel immediately or personally threatened by climate change effects, it means something else. A future filled with horrible stories and news about  wars, conflicts, displacements and human suffering. A world like ours, but worse in every possible aspect. A world destroyed by the greed and carelessness of some humans. How would you like to live in such a world?

Doesn’t the idea make you even a little bit anxious?

Many studies find that people of different countries, age groups and social backgrounds are extremely concerned about the issue. They express their concerns  in very different ways.

A 2017 study of the American Psychological Association, found out that members of an Inuit community were experiencing very unpleasant emotions because of climate change. These unpleasant emotions ranged from fear, sadness, stress, to loss of self-worth and community sense of belonging. In this article published a few days ago, psychologists around the world are noticing that children are more and more worried about the situation of the climate, and more prone to solitude and anxiety, or, “ecoanxiety”. Ecoanxiety here refers to the “chronic fear of environmental doom”.

Some people are even considering not having children. They deem the world not a suitable place anymore to bring them to, and leave them to face a climatic disaster. This position – of not having children anymore – is a clear sign of despair and a hopeless perspective of the future.

In my opinion, the first thing you need to do is to understand ecoanxiety in a healthy way. To that end, the work of the swiss psychiatrist Carl Jung could be very helpful. Carl Jung identified anxiety – among other mental disorders – as a type of neurosis. A neurosis refers to a mental disorder that involves no loss of touch with reality. It marks one’s inability to adapt to the surrounding environment properly. I understand it as a warning sign on your dashboard. In the context of climate change, several reasons involving our behavior could cause ecoanxiety. Maybe it is a backlash of our inability or inaction to do anything to change the situation? Maybe it is the guilt we feel for not giving up certain lifestyles and consumer habits that are unnecessary and harmful for the climate?

Jung continues to even present a positive side of neurosis, that could be a motive for one’s development and fulfillment of one’s potential:

“I myself have known more than one person who owed his whole usefulness and reason for existence to a neurosis, which prevented all the worst follies in his life and forced him to a mode of living that developed his valuable potentialities. These might have been stifled had not the neurosis, with iron grip, held him to the place where he belonged” (Jung, 1966: par. 68).

Therefore, we should not focus strictly on ecoanxiety, but more on its cause: climate change and its drivers. Ignoring this fact and dealing only with its symptom would be like ignoring the red warning in your car’s dashboard while driving on the highway: this is very likely to result in a dramatic accident.

Teenagers in the United States and other countries around the world seem to have understood this fact intuitively. Engaging in the Friday for Future movement, and other actionsis their way of coping with ecoanxiety. They are channeling their sentiments of fear and anger into climate action. In the US, 1 in 4 teenagers has already participated ina climate action.

This would be the second advice. To engage for the climate. We could engage in a first step by reading and understanding the scientific proofs of the causes and consequences of climate change. When ready, there are many possibilities in which you can have a positive impact on the climate. On personal level, you can change some of your consumption habits, like eating less meat and dairy products. Collectively, there are many initiatives and networks of climate action you can join and support to make a difference. Although the clock is ticking, action is still possible. Even if the pace is slow and what is being done is not enough, many achievements are emerging all around the world. Resigning in despair is a commodity we can’t afford. 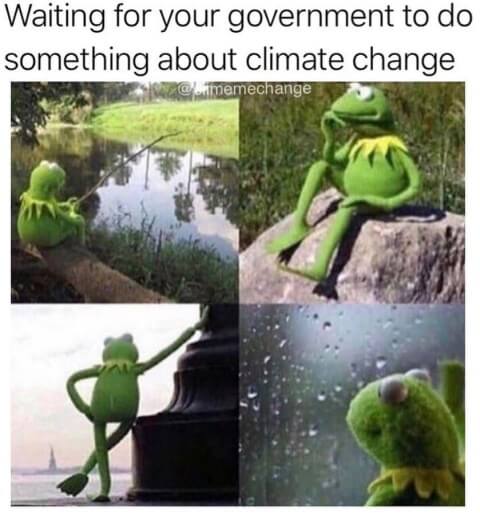