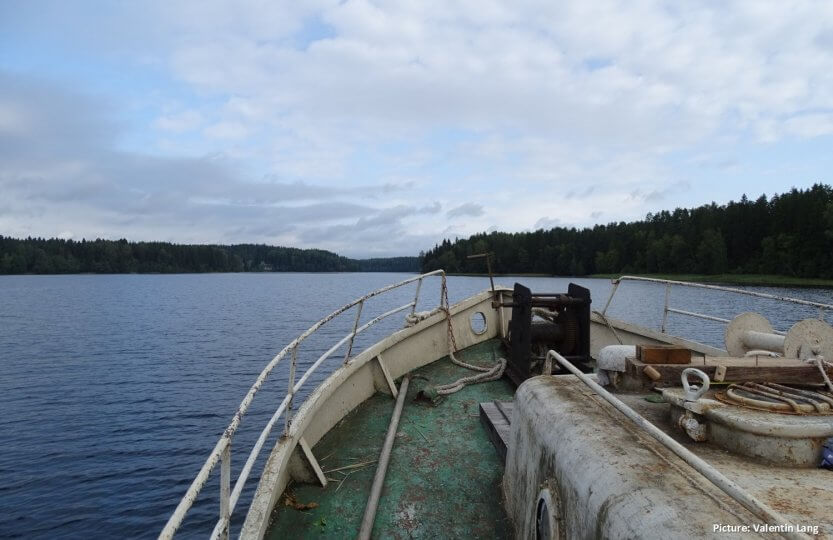 “No photos!”, the older man shouts, walking from the bow to the stern of the rusty cutter-like ship. Luckily, I had already stopped taking photos before as it was announced earlier that it is forbidden to take photos on that particular sector of our trip on two beautiful lakes. Both lakes are located within the Valdaysky National Park which lies between the Russian capital Moscow and Saint Petersburg in the Novgorod Oblast region.

The exploration of the national park is part of a summer school I participated in. Valdaysky National Park is characterised by picturesque lakes and forests of the Southern Taiga vegetation type. Besides lakes, conifers, mosses, ferns and bilberries are dominating the scenery. Many animal species like moose, beavers, wolves, brown bears and lynxes and a high diversity of bird species can be found in the national park. From 1936 to 1941, the area was under protection as a natural reserve but lost the status because its timber was used and roads were constructed after the Second World War. In 1992, the Valdaysky National Park was founded. Today, the national park is divided into three zones: The first zone is a natural reserve with the strictest protection of nature, the second zone is designed for ecotourism and the third, biggest zone for recreation.

During our excursions in Valdaysky National Park, staff members of the government-funded “Valday Hydrology Institute” showed us their hydrologic measuring stations and instruments.
Earlier the same day when we had to stop taking photos, we follow two scientists of the institute and the captain on the cutter-like ship. It is a partly cloudy day, the sun is sparkling on the water surface most of the time. During the next hours, the ship will travel to three fixed sample areas on Uzhin Lake and Lake Valdayskoye. The sample areas are differing in size of the respective lake (which affects the influence of the wind speed) and proximity to the next city (which affects the influence of human activities). In every sample area, the transparency of water, photosynthesis, the amounts of nitrogen and phosphor and the temperature are measured every ten days. By taking samples, one of the scientists is telling us that they have to manage their research with a small amount of money. For instance, they are still using some older instruments and had to stop to measure the pH value of the water since the instrument has broken.
However, during another excursion we noticed that imported modern technologies do not need to be helpful if they are not adapted to the local conditions. One middle-aged scientist on that place demonstrated how he is measures the flow velocity of a river. To do so, he has a modern equipment now: A machine made in Germany which is driving a modern Russian instrument into the stream water with the help of a power generator. While the previous non-electrical equipment also worked during floods, the new one can only be used during normal water levels. Another example was given by a young scientist on an excursion through the forest: She is measuring the amount of rainwater by an automatic pluviometer as well as a non-automatic pluviometer. This is necessary because sometimes there is no electricity in the forest and then the automatic pluviometer does not work anymore. That means, every ten days, a scientist has to come into the forest and measure the collected water in the tank of the pluviometer to make sure that no gap in the records occurs.

Back on the ship, the old scientist is not talking about challenges only but also about the success of the water monitoring: Because of the measurements the waste water is not directly introduced in the lakes anymore, our accompanying professor is translating from Russian into English.

During the shipping, I see coniferous forests surrounding the lakes most of the time. Therefore, it is very striking when suddenly something golden is glaring: The Cathedral of the Russian-Orthodox Valday Iversky Monastery. The monastery, founded in 1653, actually is standing on an island but a street mainly brings tourists and pilgrims from onshore to the historic place nowadays. Disregarding the cars and visitors, one still can feel the wind of former times blowing from the monastery.

Another area is attracting my attention during the excursion on the two lakes: Safety fences, cameras and camouflage nets are safeguarding the lakeshore on one area which is a residence of Vladimir Putin, the President of Russia. We are told that also conferences with international politicians took place there. Our ship needed a special permit to pass that sector of the lake with the constraint of not taking photos of the area. For a few minutes, I forgot to be in a national park and felt the atmosphere of Russian policy. I can understand why the place of Valdaysky National Park has been attracting humans in the past to this day, no matter whether they are cleric, politicians, tourists or something else.
Before I came to the national park, I expected to learn more about the local flora and fauna, when I left it, in addition to that, I have learned something new about scientific work in Russia, about the (dis)advantages of new and old scientific instruments, about the Russian-Orthodox church, the Russian history as well as about Vladimir Putin.
Valdaysky National Park is full of surprises and full of stories whereof many still need to be told …

Note: The information in the text are originating from my notes I took during the excursions. Because of language barriers the accuracy of the information cannot be guaranteed.