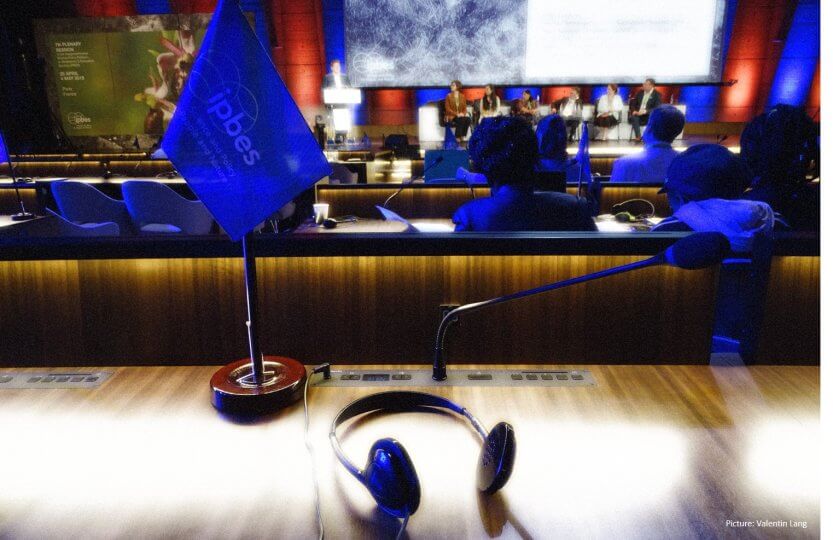 At the IPBES-7 conference, 132 member states cooperated. How did communication work with such a variety of different countries and languages? As I wanted to know more about it, I went to the interpretation cabins in one of the lunch breaks and spoke with a technician who was sitting next to the interpreters and who was responsible for the technology in the plenary hall.
Multilingualism enables communication between all the member states and ensures participation of all countries in the discussions and meetings. The conference communication is based on the six official languages of the UN, namely Arabic, Chinese, English, French, Russian and Spanish. Delegates may speak in any of these languages while having their speech simultaneously translated into the other official languages.
At the IPBES-7 conference, there were two interpreters for each language. As the work requires high concentration each interpreter translates for 30-minutes intervals. Additionally, there are two pairs of interpreters. One of them is working the first half of the day, the other pair is working the second half of the day. As the interpreters do not speak all these six languages, they sometimes use the English interpretation to translate it into their language. The Spanish interpreter, for example, can use the English interpretation of the Chinese speech of a delegate to translate it into Spanish. This may cause a short delay for the listener.
It was very interesting to learn how languages are translated during an intergovernmental conference. Their work enables clear and concise communication between the delegates of many different countries.