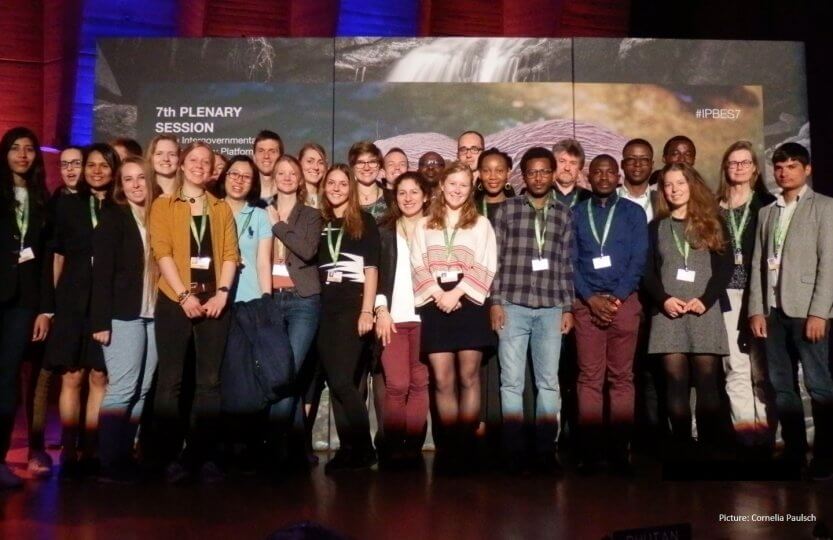 +++ IPBES-7 Day 6 (04-05-19) +++
Today, the final IPBES 7 day took place. Obviously, for some delegates it was a pretty short night. Today´s time was restricted because the conference had to be finished by 18.00 o´clock at the latest. At around 09.30 o´clock, Dr. Axel Paulsch, first chair of the “Institute of Biodiversity”, answered our questions and gave us some explanations.
At 10.00 o´clock, the working group on the Global Assessment Report started to discuss about how to deal with the knowledge gaps. Afterwards, there was a break to upload the final updated documents.
The concluding plenary session started at around 11.30 o´clock. The report “Global Assessment of Biodiversity and Ecosystem Services” was approved which resulted in big applause. The report will be presented to the public on the upcoming Monday. The importance of the report was emphasized and the scientists involved were thanked. After that, Cristiana Pașca Palmer, the Executive Secretary of CBD (“Convention on Biological Diversity”) gave a speech. Then, the documents “Work programme of IPBES up to 2030”, “Financial and Budgetary Arrangements” and “Organization of Work and Dates and Venues of Future Sessions of the Plenary” were discussed and finally adopted. Afterwards, different nominations and elections were hold. At the end, closing speeches were given and thanks were addressed to many people involved, especially to the IPBES Chair Robert Watson, whose term of office ends today. Finally, Mr Watson gave his humours farewell speech. At around 15.00 o´clock, IPBES 7 was over.
I was surprised and relieved that, finally, all the important documents could be adopted. During the first days, the progress seemed to be pretty slow but, probably, to be short of time is necessary for international negotiations to find compromises. It is great that we GCE students could attend the seventh session where the “Global Assessment of Biodiversity and Ecosystem Services” report was discussed and adopted. The Global Assessment Report is seen as a “milestone” in the field of biodiversity and, for sure, will come along with us also in the future.
The current state of biodiversity on our earth is investigated and international accepted now. Now, the decisive question is: How will politics, the society and every individual person respond to that? “We did not know that …” does not work anymore since at least the adoption of the report.
For me, IPBES 7 stands for huge concerns but also for hope at the same time. Both, a failure but also a change is still possible. It depends on everyone of us, which direction the future will go.

+++ IPBES-7 Day 5 (03-05-19) +++
Today was the second to the last day of IPBES 7. The GCEs and the study program coordinator Dr. Stephanie Thomas participated in IPBES 7 together. The team split and joined parallel sessions and events according to the respective interests. I focused myself on Working Group I (WG I). As always, the chair started the session with a brief recap and with information on the progress achieved in previous sessions and from the respective contact groups (so called “friends of the chair”). Meantime, the chair also admired the flexibility shown from the delegates and was hoping that the meeting would achieve good progress today too.
The session started with an intensive analysis and with negotiations to further clarify the background document. Compared to the key messages for policy-makers, the background document seemed to get good agreement at the start but went to very intensive discussions on certain issues. The delegates fruitfully criticized wordings and the authors (“CLA”) tried to clarify the questions and concerns raised from the delegates, which significantly contributed to get a well-accepted document. The WG I morning session today was concentrated on biodiversity conservation, sustainable use and management of biodiversity and on land management. Some issues got intensive debates and went for long discussions and were assigned to the “friends of the chair”. “Food production and bio energy”, “Food consumption”, “Human and non-human rights”, “Food waste”, ”Economic model”, “Animal trade”, “Transparent or effective monitoring”, “Use of genetic materials” were the most debated topics today in WG I.
In my opinion, active and creative interventions in such a platform do not only help the world to understand the major issues and problems of the respective region, but also can significantly contribute to evolve new ideas and knowledge. However, I feel the majority of the countries didn’t utilize this opportunity, which is quite confusing for me. I think at the same time not only in policy formation but also empowerment of the members is equally necessary to recognize the issues and problems. Otherwise, the result would be harder to obtain even with a well-accepted final document.

+++ IPBES-7 Day 4 (02-05-19) +++
This day, three different contact groups were working in parallel: “Global Assessment”, “Review” and “Budget”. In addition, a separate contact group was formed to discuss the “Figures of the Summary for Policymakers of the Global Assessment”. The interests of the GCE students have mainly divided between two of the mentioned topics (see below), while the budget group remains closed to the observers.
“Global Assessment” focused on the key messages that refer to the conservation of nature, its restoration and sustainable use. The rate of approval, however, remains low, requiring at times 1.5 hours to approve several sentences. On the positive note, with some additional time being spent in the concluding days, the initial agenda items are expected to be covered.
The thematic focus of the contact group “Figures of the Summary for Policymakers of the Global Assessment” included, among others, the increase and decline in ecosystem services, a range of direct and indirect drivers of change, species biodiversity and extinction. Among the most discussed issues was the language that should be used in order to make it more understandable for the policy-makers. Numbers, indicators and references, as well as time-scale indication of the changes conveyed and the extent of detail were the topics addressed by the contact group.
By the end of the day, some issues remain a concern: the degree of detail that should be contained in the key messages and the pace of the negotiations progress. This, in turn poses a number of questions with regard to the global agreement among countries, while ensuring that their national interests are met.

+++ IPBES-7 Day 3 (01-05-19) +++
In the morning, we had a pre-meeting with Dr. Axel Paulsch who answered our questions that had come up during the previous day.
At 10 a.m., the plenary session started which was dedicated to organizational issues and a report on the progress of the working groups.
After the plenary session, the working group 1 “Review of the Global Assessment“ continued its work with the Summary for Policy Makers of the Global Assessment Report on Biodiversity and Ecosystem Services. In parallel, the budget group met. The budget group was closed for observers, so all GCE students listened to the discussions about the Global Assessment. It is surprising for me that the delegates have so many interventions regarding the phrasing. It is interesting to experience how difficult it is to come to a consensus even if countries coincide in the general content of the report.
In the afternoon, most GCE students joined the session addressing the second work program of IPBES. Delegates of different countries and organizations presented general interventions and supports. These statements were followed by a discussion about the specific content, priorities and directions of the program. A draft version was reviewed paragraph by paragraph. Simultaneously, the first working group continued its work on the Global Assessment.
It is another day full of intensive and exciting discussions.

+++ IPBES-7 Day 2 (30-04-19) +++
‘Steps for a change’ was the name of the opening performance yesterday. The report of IPBES hopefully will be a huge step for conserving biodiversity in future. However, today it seems like everyone was taking just very small steps …
Today was the first day when the IPBES plenary worked in two different working groups. One was dealing with the Global Assessment Report and the other one was reviewing IPBES.
Within the Global Assessment Report group, the key-messages of the summary for policymakers were projected on screen. The leading authors presented the different paragraphs and the already included comments. After that, the delegates of the member states got the chance to propose changes such as specific wording, structure and clarity. Thereby, experts payed close attention on the technical possibility of the alteration. Thereafter, the delegates again had the chance to accept the sentences or to suggest further changes. Only if none of the delegates had any objections the paragraph was confirmed and it was possible to get on to the next one.
With 132 members states it seems natural that a lot of changes are proposed. Thus, it was very challenging to find a solution that everyone could agree on. Some negotiations seemed to run in circles and often got back to previous wording.
Nevertheless, it was really interesting to follow this process, to get to know the different standpoints of the member states, to feel the frustration about the slow progress and at the same time the hope for a report that really is a step for a change.

+++ IPBES-7 Day 1 (29-04-19) +++
The first day of the IPBES 7 conference was dedicated to officially kick off the conference. All GCE students joined the event from the morning on, which started with an inspirational performance of young dancers and was followed by welcome speeches held by the chair and secretary of IPBES. Raising their voices, also many parties and representatives of related organizations formed summaries of the past work and welcomed the seventh plenary session. This first session in 2019 started by introducing and moving along in the agenda which includes in particular the election of a new bureau and chair, transparency for observers, a report on the first work programme (2014-2018), setting up relevant working groups for IPBES 7, review of IPBES first work programme and organizational matters of the plenary.
This opening session was rounded by the formation of the first working group targeting the Global Assessment Report launched soon and an opening ceremony and reception at the National Museum of Natural History.
I believe this day covered a lot of obligatory agenda points and set the base for open discussion among the parties on the further items.

+++ IPBES-7 Stakeholder Day (28-04-19) +++
On Sunday, the Stakeholder Day of IPBES 7 was held at the UNESCO headquarters in Paris. For us GCE students this was the first day and involved getting to know the building and schedule for the upcoming week. We spent the day listening to several talks about stakeholder engagement and the global assessment. Some of us also took part in a networking-lunch about the IPBES work-programme while talking to other stakeholders and experts.
For myself the stakeholder day was a good introduction into the IPBES 7 conference. It created a nice overview and cleared some questions about how specific sessions will work. Especially, the interactive “Menti”-sessions were a lot of fun because everybody was able to participate and express his/her opinion. Today also showed that IPBES is a familiar atmosphere which gives us great opportunities to get in contact with other people.
Overall, I can say that I am extremely excited for the upcoming week with new experiences and impressions. Special thanks to GCE, Bayceer and the ENB (“Elitenetzwerk Bayern”) for making this experience possible for me!