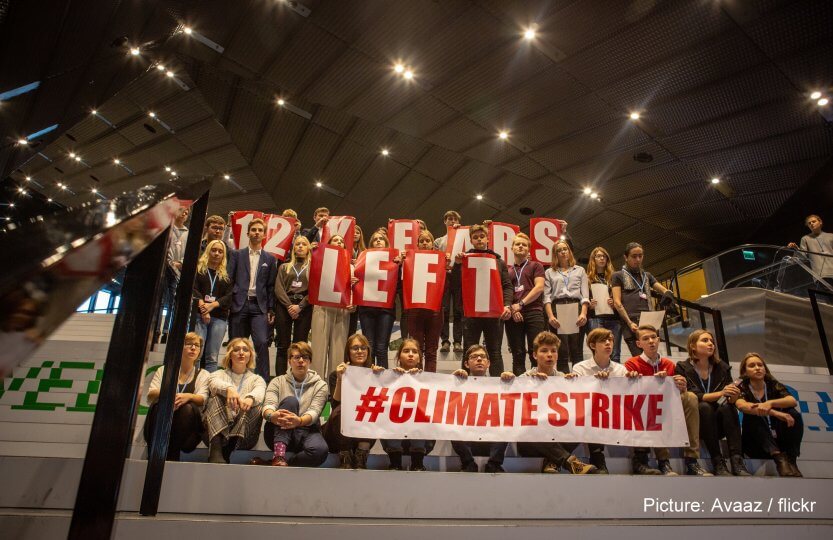 “Every Friday, we sit outside the Swedish Parliament until Sweden is in line with the Paris Agreement.” Greta Thunberg has a defiant look in her eyes while she is speaking these words. Powerful words that have brought her a lot of attention during the last weeks. The 15-year old Swedish girl with two braids has started something that even she might not have imagined when she first refused to sit in a classroom on Friday and instead went to sit in front of the Swedish Parliament. For the sake of global climate. Sitting in front of the parliament, she held a sign which read “Skolstrejk för klimatet” – school’s strike for the climate.

First, this strike was intended to endure until the election of a new parliament. This election was in August ­­- now, in December, Greta who has Asperger’s Syndrome is still missing her classes on Friday. Still protesting inaction on climate change. Her parents wanted her to go back to school, some teachers as well. Some teachers support her rebellion – risking their own jobs by joining her protest every Friday. Today, Greta is no longer sitting alone in her protest for the climate: All over the world, students have joined her. They don’t go to school on Fridays but use the time for protesting against the way climate politics are working (or not working) these days. The hasthag #FridayForFuture is used by countless young people on Twitter who want climate action to happen.

In Australia for example, the coal industry is booming – and the Great Barrier Reef is dying. Thousands of students didn’t go to school on a Friday in November, angry about the conservative politics of prime minister Scott Morrison. The students went to the streets, striking because of the failure of the Australian government to lower carbon emissions. “The dinosaurs thought they had time, too”, “Mother Nature does not need us – we need Mother Nature”, “We grow and we vote” are some of the inscriptions on the signs the students carry with them. Morrison raged because of these protests, stating that students should not be activists and stay in school. Greta Thunberg had an adequate answer to that via Twitter: “Sorry, Mr Scott Morrison. We are unable to comply.” Brave words from a young climate activist talking to an adult man who seems not to (want to) understand the severity of climate change.

Greta Thunberg now is a hero at the COP24, the UN conference on climate change that currently is taking place in Kattowice, Poland where the world is negotiating solutions for climate change. After the Paris Agreement in 2015, the last years of the COP didn’t have a very groundbreaking outcome. In Kattowice, Greta gives the adults a telling: The absence of some country leaders, for example US President Donald Trump or German Chancellor Angela Merkel, “shows what they prioritize”. About the same politicians she said that “In the future, we will look back, and we will either laugh at them or we will hate them.”

Between all the officially looking, black wearing politicians and decision makers, Greta in her pink sweatshirt seems like a bright spot of hope. “I will ask the people around the world to realize that our political leaders have failed us. […] There is no time to continue down this road of madness.” She asks how poorer countries like India, Colombia or Nigeria could care about the climate crisis if the more developed countries (“who already have everything”) don’t try to fulfil the Paris Agreement.

“The climate crisis has already been solved. We already have all the facts and solutions.” Did it have to come that far that a young girl needs to stand up and give the politicians of this world a symbolic slap in the face? The fact that the climate conferences don’t have legally binding agreements is a shame. Because who would stick to them if there are no consequences for not doing so? If one country decides to step out of a contract, there is no way to enforce this country to stay. Economic sanctions might be a solution but concrete legal action would be more fruitful probably.

Regarding the future that lies ahead of us if we don’t stand up and do something, the situation looks quite hopeless. But seeing what a young girl with a goal, a wish to change the world, can start, gives back hope. It gives hope that our generation and the generation after us cares about the climate. That we and they are thinking further than our lives. We just have to do it. Now. We have to be stubborn, we have to be defiant. We all have to be like Greta: “We are here to let them know that change is coming – whether they like it or not.”

Side information: Some GCE students had the chance to take part in the COP24 and will talk about their experiences in some following blog entries.