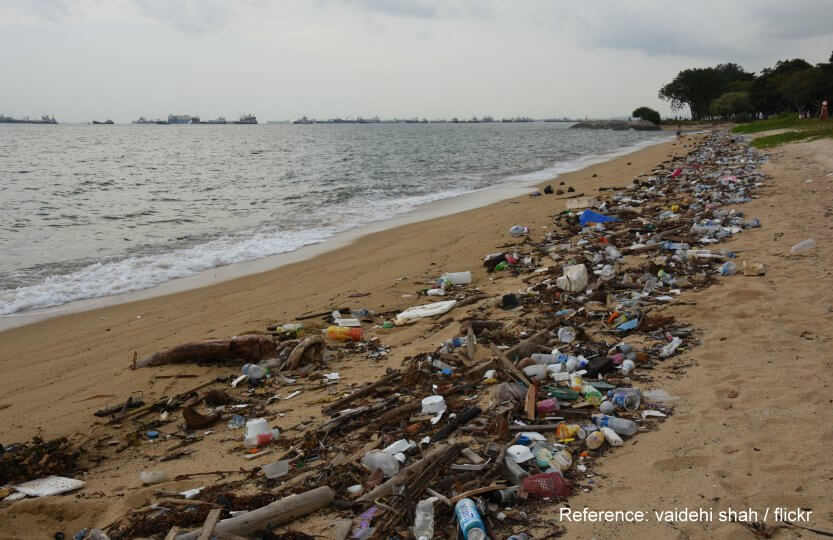 Imagine this: you stroll through the supermarket, looking for cotton buds – but you can’t find the little plastic sticks. When you ask the shop assistants, they look at you as if you were coming from planet Mars and answer: “Don’t you know that plastic cotton buds are now forbidden?”

This situation could happen soon. In May 2018, the EU has announced to ban certain single-use plastic items. These include: plastic cutlery, plastic dishes, plastic straws, plastic drink stirrers, plastic cotton buds and plastic mounts for air balloons. Single-use drinks containers will only be allowed to be sold if their caps are attached permanently so that they don’t fall off and lie around if people don’t pick their trash up. Furthermore, the member states have to fulfil some consumption reduction targets: they have to reduce the use of plastic food containers and drinking cups. Also, the member states will have to collect 90% of single-use plastic bottles by 2025 – the German Pfand system (you pay a certain amount when buying the bottle and once you bring it back to the supermarket you get this money back) might be a solution for this. In 2030, 100% of plastic bottles shall be recyclable.

Why did the EU pass these new restrictions? One reason for the ban of certain single-plastic use items is that 85% of the trash in the oceans worldwide consists of plastic. As we know (also from former articles on the GCE blog), this waste is polluting oceanic ecosystems and most of it is not biodegradable. According to the EU, the EU alone comes up with 26 million tons of plastic waste per year. Not even a third of this trash is reused – the rest goes to landfills or into the environment. The plastic and microplastic in the oceans finally ends in the stomach of birds, fish and other animals living in the sea. In the end, the microplastic in the ocean comes back to us on our plates – when we eat fish or even when we drink water from single-use plastic bottles as they also excrete micro plastic. Even veggies are polluted by microplastic as it also reaches our fields through plastic waste that is thrown away into the organic waste.

As the EU is mainly an economic union, there is of course also a financial aspect: On the long run, the EU will probably save up to 6.5 billion Euro (he did not state clearly if this sum is saved per year or in total), says EU-commissioner Jyrki Katainen from Finland who is responsible for jobs, growth, investment and competitiveness.

Are there going to be alternatives for the banned and restricted items? The producers of single-use plastic products are already working on that – Tetrapak for example has announced to switch to paper straws for juice or milk cartons until the end of the year.

This ban and restrictions are a good step into the right direction. They address harmful and unnecessary items which can be easily replaced: when going to a barbecue party, just take your own plates and cutlery, when cleaning your ears, use cotton buds with wood sticks – they are already available in drug stores. These things are not costing you more money (actually less, as you don’t have to buy plastic forks and plates).

But the critics towards these plans also have a point. Martin Häusling, deputy of the green party in the EU parliament, calls it  “politics of symbols” – he calls for a ban on the packaging of food and more systematic recycling. Others compliment the approach of the EU and throw in the idea of a tax on plastics: this would in their eyes be much more effective if we want to address the problem of plastic pollution. Another aspect of the critics is the question which materials are going to replace the plastic-based ones – so called “bioplastics” (made from corn for example) need a lot of space and resources and are also very slowly in degrading.

This is dead right. But instead of grumping, let’s acknowledge the positive aspects of this ban: It is an eye opener, targeting this really big problem of plastic pollution. It could push the discussion about how we can act environmentally better. It will change the consumption of single-use plastics by not allowing companies to produce them. It is not possible to stop pollution from one day to the other – but small steps could also in the end lead to success. This plan might have its flaws – but it is hopefully a step into the right direction.

To not to choke in a giant mountain of waste and trash, we must change the way we consume. This article is the part of a series dealing with the chaotic and broad topic of waste. We want to give you different views on the topic and highlight ways how to reduce your personal waste generation. Find more articles here.