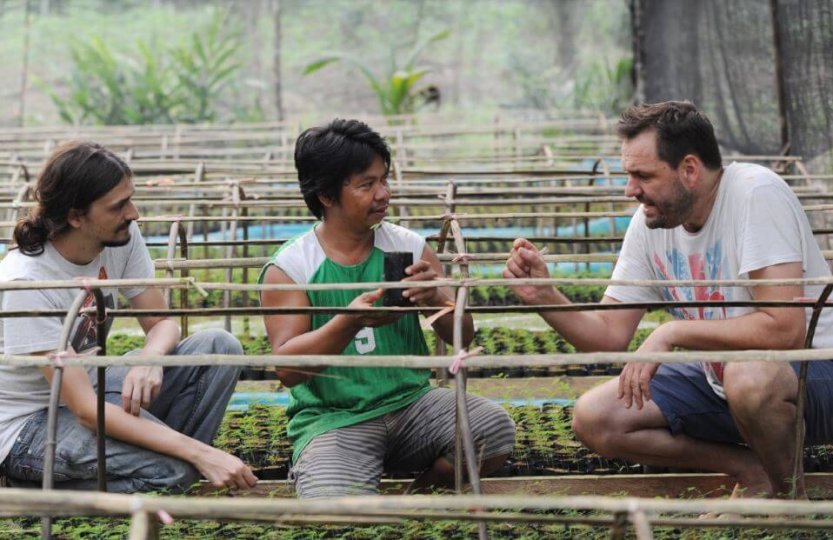 These words still resonate in my head while I come back from my meeting with Johannes Schwegler, CEO of Fairventures Worldwide.

Johannes is a wood engineer who has spent his 30s living on the Kapuas riverside, teaching forestry and wood processing to Indonesian students. From his house on stilts, he used to watch huge boats transporting trees older than he could ever been. He was aware that these trees were cut from the primary forest, that they were taken from a peaceful life and brought out of their untouched environment in order to make place for palm oil. Johannes knew that this type of tree harvesting was not sustainable, not only because it ended the life of monumental trees, but also because it disturbed water cycle, increased soil erosion and threatened biodiversity. An indigenous Dayak woman who joined the program © Fairventures Worldwide

Worried by this unsustainable practice, Johannes decided to take action. He created Fairventures Worldwide, a NGO which empowers farmers with sustainable practices. Unlike many non profit organizations which restore the landscape by planting trees, Fairventures Worldwide sows the seeds of knowledge and good practices in the minds of the Dayak people.

The Dayaks are the native people of Borneo, they traditionally manage the land by cutting the primary forest, burning it and cultivating on the newly deforested area. Fairventures Worldwide prohibits their Dayak partners to use this slash and burn method, for this reason the NGO offers them a sustainable alternative: the agro-forestry.

Farmers care for their trees and crops © Fairventures Worldwide

In an agro-forestry system, crops are cultivated under shade between the trees. To add complexity in this ecosystem and create habitat for the biodiversity, Fairventures Worldwide plants three layers of vegetation. The lower layer on the ground supports peanuts or local vegetable crops, the intermediate layer is made of shrubs such as cacao or coffee trees, and the highest layer is made of fast-growing pioneer trees such as Acacias or Albizias. The latter are used to make engineered lightwood products.

Booth, panels and glued laminated timber made of Sengon at the Trade Expo of Jakarta © Fairventures Worldwide

With the design of new products, such as the lightwood, the non-profit improves the lightwood value chain and introduces it to the Indonesian and global market. Moreover it is in touch with buyers looking for sustainable wood and its derived products. The company is also on the way to certify fifty tons of organic peanut they produce each year and thus sell them in Germany.

An App to monitor trees

Johannes is a social entrepreneur therefore he wants to educate and empower Indonesian farmers. For this reason, his organization is currently developing a mobile application to help farmers monitor their trees. This App will enable them to take a photo of the tree trunk, know its diameter and thus the amount of wood in it. By knowing exactly the value of their trees, they will have a better bargaining position when selling the timber. Moreover a precise monitoring of their trees will help farmers get the highest amount of timber by cutting their stand at the optimal harvest time which is yet a widespread practice in Indonesia. Thanks to Fairventures Worldwide, about 1000 Dayak farmers have switched their field into an agro-forestry system. These farmers have a sufficient income to live on the timber production and don’t cut the primary forest anymore. The success of this management doesn’t go unnoticed in the region and by word of mouth more farmers are reaching the company to get advice and learn sustainable practices.

The company has almost reached its first goal of planting 1 million trees and is moving toward its second goal: planting 100 million trees. In the future, Johannes also wants to engage in the Orangutan conservation effort. He is starting a partnership with WWF and BOS, the wildlife protection organizations, to connect primate populations by planting nest and food trees on farmers field. Thanks to this wildlife corridor, animals will move between tropical forest patches and access new habitats.

Although we may judge those who deforest, kill biodiversity and contribute to climate change, we often tend to forget that these are sometimes not evil but just people in need – struggling for a daily meal and a future. These are the realities happening in contrast to the European or American ones, where people enjoy a comfortable lifestyle with a 9–5 job, three daily meals and a safe future.

Efforts like the ones done by Fairventures Worldwide help indigenous people find an economic alternative to deforestation. Let it be in the form of agro-forestry or of tropical lightwood like Albazia, families are starting to generate a sustainable income from formerly misused landscapes.