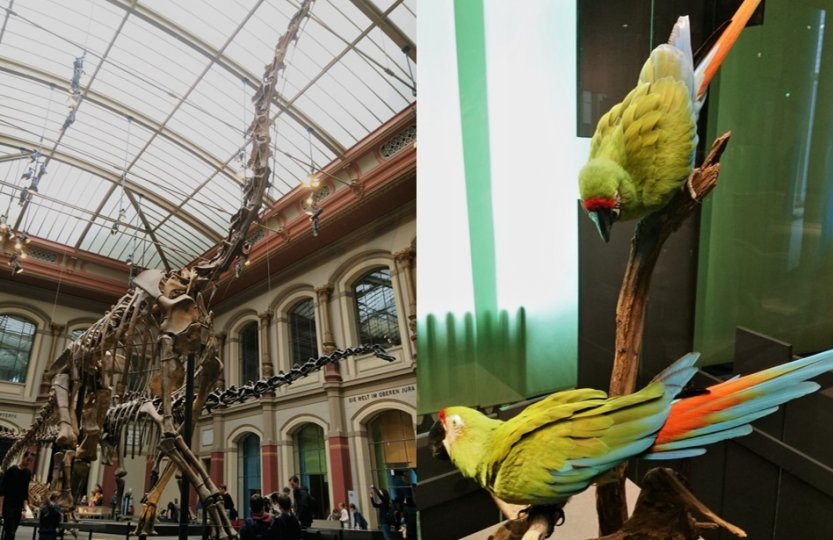 Since May 2017 the Natural History Museum of Berlin, Germany, showcases a special exhibition focusing on Macaws (Aras). Right after passing by gigantic dinosaur skeletons in the entrance of the museum, the visitor enters a room with a South American atmosphere and dozens of colorful specimens of Macaws.

From fact sheets pinned to the walls we learn that macaws face several threats. Habitat loss due to the clearing of woodland for the means of tropical wood harvesting, grazing grounds, arable land, and mining, is the most severe threat. Especially in the Amazonian and Cerrado region, where the natural habitat of the birds is lost at an immense speed. Being highly adapted to certain trees for feeding and nesting, macaws cannot easily find new homes.

Another reason for the decline in macaw populations is illegal trade and poaching. The pretty birds are very popular as pets, especially because of their intelligence and social personality. Sadly, the typical human friendly behavior of macaws is based on the lack of alternatives after the birds are taken away from their families.

As a result, many of the macaw species are listed in the IUCN red list of threatened species. The Blue-throated Macaw and the Spix’s Macaw for example are categorized as critically endangered.

Threatened macaws: How does this relate to us – to you?

The destruction of the Ara’s habitat is largely triggered by the global need for soy. Germany, for example, imports more than 6 million tonnes of soy each year and the vast majority is grown in South America where the macaws live. An estimated 2.2 million hectares of land is dedicated to the production of soybean for Germany.

Now, people assuming only vegans with their tofu and other soy based items are responsible for this high demand, are wrong. In fact, soy for tofu comes mainly from organic productions from within the European Union.

The quoted number is used to feed pigs, cows and poultry. One meal of traditional roast pork alone destroys two square metres of potential macaw habitat. According to the fact sheets at the exhibition, the entire German Federal State of Thuringia would need to be converted to arable land with soybeans to satisfy the meat industry’s demand for this fodder.

As a logical conclusion, less meat in your daily life helps to protect the lives of the beautiful macaw species in South America!

More information on the exhibition can be found here. The Natural History Museum in Berlin is definitely worth a visit. It showcases earth history, evolution, dinosaur skeletons, minerals and much more in a very informative way – and with special student price of only 5 €.