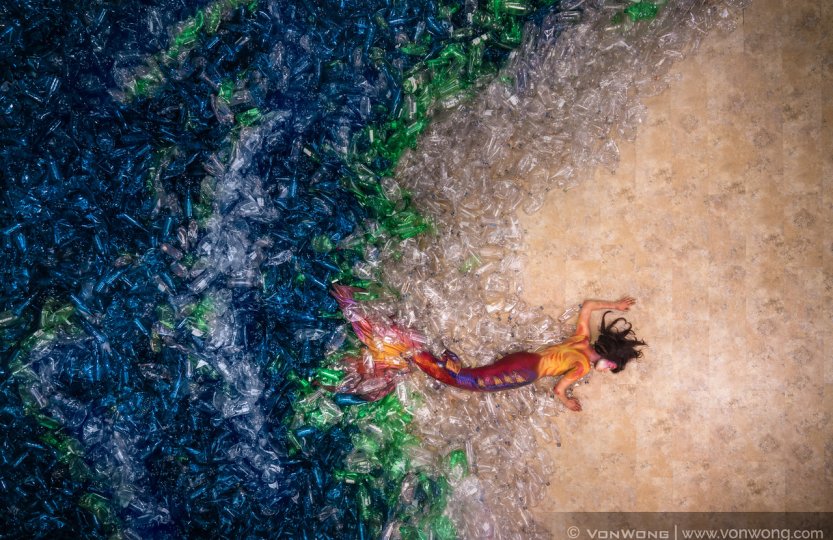 It requires a little luck and steadiness to reach Benjamin Von Wong. And it also requires a lot of organizational talent regarding the time difference between Germany and the US west coast. But when we finally “meet” via Skype, the 31-year-old photographer is a very interesting and dedicated interview partner and not really what one might have expected from an artist. With his hyper realistic pictures, he tries to raise awareness for environmental problems. While getting interviewed, he is on his way to film an image movie. Currently, the artist is living in San Francisco, California.

Von Wong: There are lots of documentary photographers out there, capturing great stories. I think it is important to always have a different approach. Documentaries have a very important but also a very different way to communicate with people and reach a different sort of demographic which is important. To create these epic stories, just happens to be something that I am particularly good at. I try to educate through adventure and I found that the internet likes things that are really flashy and it’s something they have never seen before. It is an effective way to communicate with an audience that is not already interested.

Your picture with a mermaid drowning in plastic bottles was exhibited at the UN Environmental Assembly in Nairobi last year. Do you see yourself as an environmentalist?

They reached out for me and asked if they could use my latest work on plastic pollution. In the end, they used around seven or eight of my pictures, some of the plastic pollution topic and some others about toxic laundry. I wasn’t invited to Nairobi unfortunately, so I did not attend the assembly. But this is what I try to do: I want my images to help people who are struggling to get their message out there. I don’t necessarily consider myself as an environmentalist, there are so many amazing environmentalists doing far more than me. At the end of the day, I am just somebody trying to do positive things with the skills I have.

How do you create an interaction between your art and people, outside of social media?

I am more focused on the online engagement for now. In the future, I would like to get more into creating installations. That is what I am doing right now: Creating installations – and after the work we destroy it. So, in many ways, I am creating temporary art installations and I would love to find a way for them to live on. The problem is that it costs a lot of money, you need a place to store it, exhibit it… Hopefully someday someone is going to say: “Hey, let’s make it something more permanent!”

Sometimes, for example with the mermaid and the plastic pollution, we transform the work into educational posters which you can buy then. And I think, we are going to do the same with the e-waste posters, so that everyone can buy it without making profit. For now, the only way to own one of the pictures is either as a gift or if it is related with charity. Maybe one day, when I become a starving artist, then I might sell them. (laughs)

Who supports you in your complex photoshoots?

Mostly it is all done by volunteers. People I never met before text me that they want to help. Mostly I post something on social media asking if anyone is in town and wants to help and people just show up. For the e-waste project, there were about 50 volunteers.

You have a background in engineering and are now a photographer – when did conservation and social aspects become important for your work?

It was about two or three years ago when I was getting off the back of a large campaign and it felt meaningless to only do advertising. So, I started to search for a purpose and tried different ways – in the beginning I was doing documentary videos and I decided I wasn’t that good at it. So, I decided to do my crazy photography instead. (laughs)

The goal right now is to get cooperation to start supporting global campaigns. And as we are starting to get more conscious, people will start to care more about what a company stands for and not just about the final product. We live in a global economy and as everyone is doing basically the same, it becomes more about what they support, what their values are. I want to get these companies more involved – something like social capitalism. (laughs)

For me, it is a little harder to work with the establishment in the conservation field because they already have their way to do things. That is why I want to concentrate on good corporate behaviour. Instead of always pointing the finger on how companies are doing the bad thing, I want to do the reverse and reward the ones doing good things. I want to bring big brands to spending more money on social impact – it’s not about taking the brands that are already doing a lot in that area but trying to encourage those who don’t have it as a primary focus.

Adidas for example, recently launched that by 2025 they want 100% of their footwear to be made from ocean plastic – these are the kind of initiatives that will carry us into the next century. If more big brands do it, more little brands will follow, too.

Do you think that companies are shifting towards “good” attitudes?

They have to because the world is going to shift. (laughs) Maybe the next 20 years they can go on like now but in the next 50 years, they can’t. Sooner or later, the world has to make this shift. And I want to accelerate this and be on that side of the battle when it comes.

In your last project about e-waste, Dell lent you all the electronic materials you needed – and took it back afterwards to recycle them. How does this recycling look like?

They sort the material and break it down to smaller parts. We were at the facility in McKinney, Texas. There, they took all the metal parts and run it through a metalogical process to separate all different types of materials. After the recycling, less than one percent of the materials goes to the landfill. It was very impressive!

Do you know what is the impact of your pictures outside of social media?

It is hard to tell who we reach. But for this campaign we are giving away a postcard for everyone who donates their electronic waste. We have 1000 postcards to give away but so far, we have no calculations about how many items we collected. I hope to have in the end a huge amount of extra recycling as the result of this campaign.

Do you see a change in awareness caused by your pictures?

There are always positive and negative reactions. Lots of parents and teachers are excited about it because they can show it to their students and it is very interesting for them to engage with it in a different way. But how do measure the efficiency of art? That is really hard.

Any ideas for new projects already?

e-Waste, sharks, plastic bottles – they don’t necessarily have anything to do with each other. Where and how do you get your inspiration?

With the work I do, I try to connect with different people who care about the same things. Often, they say “Hey, I saw your work, would you like to talk?” and I just say yes to everybody – and sometimes, the project becomes real. One of the projects that we are launching next month was similar: We got access to a huge facility in Cambodia to raise awareness for the environmental costs of fast fashion – just because I talked to this one girl by chance. It is always about finding the people who are passionate about making a difference. We will publish our project about this probably close to Earth Day on April 22nd.

Do you have a message you would like to spread?

Participate in the challenge, recycle your e-waste, get a free card at rethinkandrecycle.com!

Thank you for your time, Benjamin!

Thank you so much!