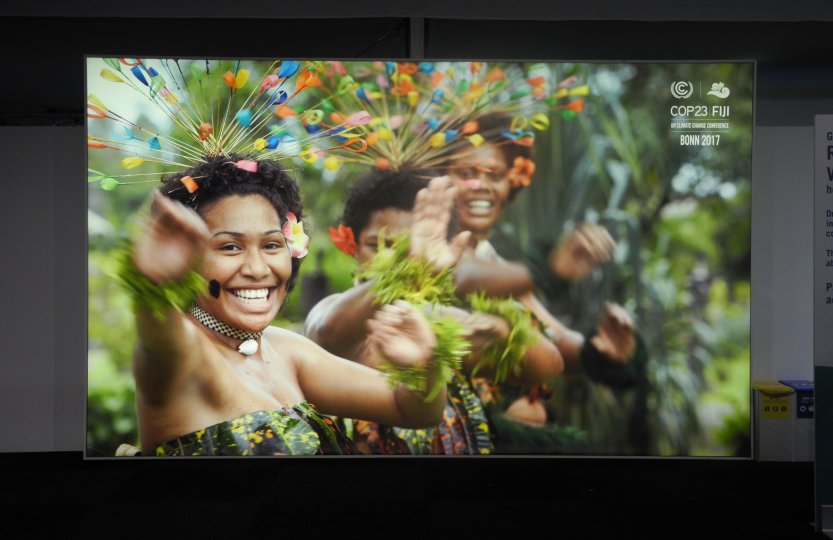 Tuesday of the second week of COP 23 was Gender Day, focusing on side events that highlight women’s role in environmental movements and on indigenous women and their fight for representation in the environmental community. Every day at COP 23 had at least one talk about gender in this field but Gender Day was meant to specifically emphasize this topic, including a Gender Market Place where NGOs and other organizations focused on women and gender in environmental fields came together in one of the meeting halls to hand out flyers and share information.

There were several themes that came up during these Gender-themed side events. One was the importance of women being included (or rather failing to be included) on panels. Noele Nabulivou, in a panel titled “Behind Goal 13:Women Leading the Climate Agenda”, spoke of her personal protest of “manels”, male-only panels, and “wanels”, white-technical panels, as a matter of the lack of representation of diversity in the environmental field. She and several other women emphasized the role that women, particularly indigenous women, play as stewards of their environments and how that so often fails to be represented at the larger, international level. The voices that get projected are largely male and largely white. This is a systemic problem in a lot of the governments and institutions present at COP. This became evident by the fact that these gender-focused events continuously brought up the uniqueness and importance of majority-female panels here and in other realms of their professional lives. There were speakers encouraging women to seek out female networks, to lift one another up and create space for one another. There were others challenging the notion of “female empowerment”, claiming that to feel patronizing, that women indeed have power, it need not be given to them. Others mentioned the finalization of the Gender Action Plan, finally approved at the COP 23 to be more mindful of gender-specific environmental policies and programs but criticized the reluctance to fully adopt this protocol.

Some of the most powerful speakers were the indigenous women from many different countries, from Peru to Kenya to Canada (..)

(…) sharing their stories of how they hold up their communities, raise their families, feed their families and act as environmental stewards. They share how climate change is making these jobs even more difficult.

From Fiji to Peru

As Fiji hosted the presidency of COP 23, one could feel the urgency and upset coming from the Fijian women who proclaimed:

<< Our lives are non-negotiable >>

In a consortium with other Pacific Island Communities, these women have come with a united front to call out the developed countries who have colonized their land, exploited their natural resources, and contributed most largely to climate change while their homelands disproportionately feel the negative effects. It is undeniable that these small island states face urgent threat from sea level rising and intensified natural disasters and those women and children will be especially vulnerable to this. The women from ONAMIAP, a group of indigenous women in Peru, pointed to the necessity Land titles, legal access and rights. They are fighting for legal security of their ancestral lands, where they have been cultivating and preserving local biodiversity for generations.

By the end of Gender Day, it became clear that many women on the forefront of environmental movements in their communities feel underrepresented at best and entirely dismissed or ignored at worst. Having one day in the entire conference just simply isn’t enough. Who we choose to let in these negotiation rooms, sit on the panels, speak for their countries matters. Who we acknowledge as those in positions of power and knowledge and solutions is important.

The motto of “leave no one behind” has circulated the conference a lot. This includes women and indigenous voices. This means calling out the current power structure that has blatantly disadvantaged them thus far. We, as environmental scientists, lawyers, policy makers, government officials, as neighbors, need to acknowledge the power-biases that take place in our field. Inclusion and visibility of indigenous knowledge and the efforts of women are integral to a just transition to a “1.5 degree world”.