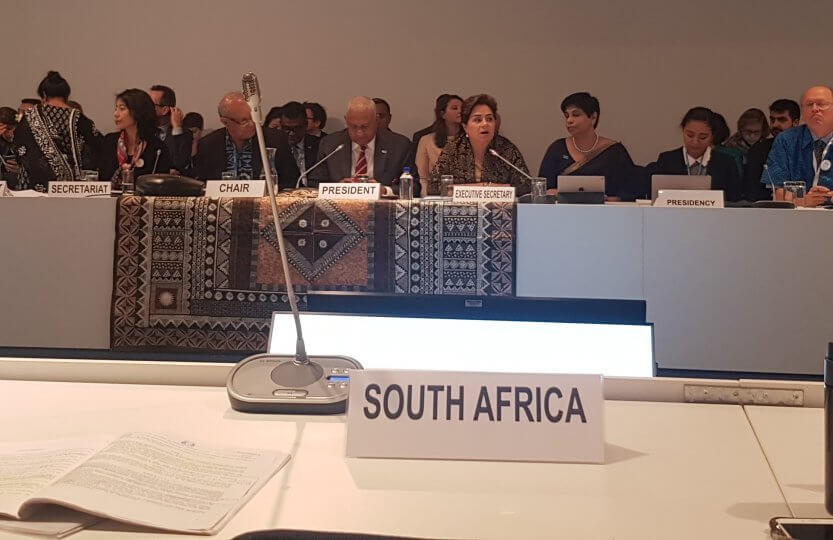 The first week of the conference was marked by the presence of several African countries which share together the urgent need of implementing the Paris Agreement. Besides participating individually to main plenary meetings and informal consultations during meetings of the convention and protocol bodies on specific agenda item of the Paris agreement, the African Group organized several closed meetings at least twice a day in order to discuss, prepare and clarify the position, visions and expectations of African countries during COP 23. Unfortunately, we didn’t have access to those closed meetings. As a result, the point of view expressed here is based on what we have heard and seen during plenaries as well as informal discussion with countries’ representatives.

Africa is highly vulnerable to climate change
I think we heard this sentence or something similar at every single speech of African negotiators during plenary meetings, and it’s not false. From coastal locations in the West, tropical ecosystems in the center, small islands in the Indian Ocean to arid and semi-arid regions in the North and South, every single country feels the adverse effects of climate change. Agriculture is the main sector impacted by climate change, due to the high reliance on precipitation for rain-fed agriculture which accounts for nearly 95% of farmed land in Africa. This high vulnerability is also linked to poverty which induces low adaptive capacities and mitigation actions across the continent.

A lot of progress is made at the national level
In response of the adverse effects of climate change, a lot of efforts is put in place across the continent to cope with climate change both at the national and international level. During plenaries and side-events, several African countries shared their efforts made. Amongst the 169 Parties who already ratified the Paris Agreement, 52 are from Africa. This denotes their commitment and their need to implement the Paris Agreement which entered into force in November 2016. In addition to that, of the 8000 climate and sustainable development projects registered under the Clean Development Mechanism (CDM), more than 45% are from African countries said Frank Volke, Chair of the CDM executive board during the 2nd meeting of the ad hoc group responsible for the implementation of the Paris agreement (APA) when presenting the annual report of their activities on Tuesday 7 November.

More than 45% of the 8000 climate and sustainable development profects are from African countries.

However, out the 52 Africans countries who ratified the Paris Agreement, only 5 already submitted their first Biennial Update Report (BUR), 2 countries submitted the second one and the rest are actively working on their own. This shows the difficulties and the challenges for African countries even if they share the same enthusiasm in the fight against climate change. At the national level, efforts are being made to improve GHG inventories and to bring together several actors, like the Climate Change Forum presented by the representative of Uganda during the first Presidency’s Open Dialogue on Wednesday, and which brings together government,  NGOs, members of the civil society, youths, local communities to discuss and find common solutions. In addition to that, several countries have already identified keys sectors focusing on adaptation and mitigation actions.

“Limiting greenhouse gas emissions is a central challenge for the future. Adaptation measures will be required in many countries…adaptation to climate change is an equally important second pillar of the Paris Agreement. Germany has been very committed in this area in the past and will remain so in future… we will once again support the Adaptation Fund this year with an additional 50 million euros” – Dr. Barbara Hendricks, German Minister for the Environment, Nature Conservation, Building and Nuclear Safety

This was perceived as a strong and powerful signal sent by the German government to other developed countries to come together and assist developing countries in the fight against climate change. Across the continent, challenges are diverse and during plenaries, African representatives have expressed their difficulties and needs in term of capacity building, technology transfer, the adaptation fund, additional funds for losses and damages as well as funds for medication. This contribution from Germany will help to move forward and reach the annual amount of $100 billion promised for 2020 by developed countries towards developing ones. Since we are all in the same canoe, several collective efforts need to be implemented to meet this goal before 2020.This means:

“We must act in solidarity because the story will not hold back who was stronger or weaker. Negotiations are important, but action is more important” – Salaheddine Mezouar, COP22 President