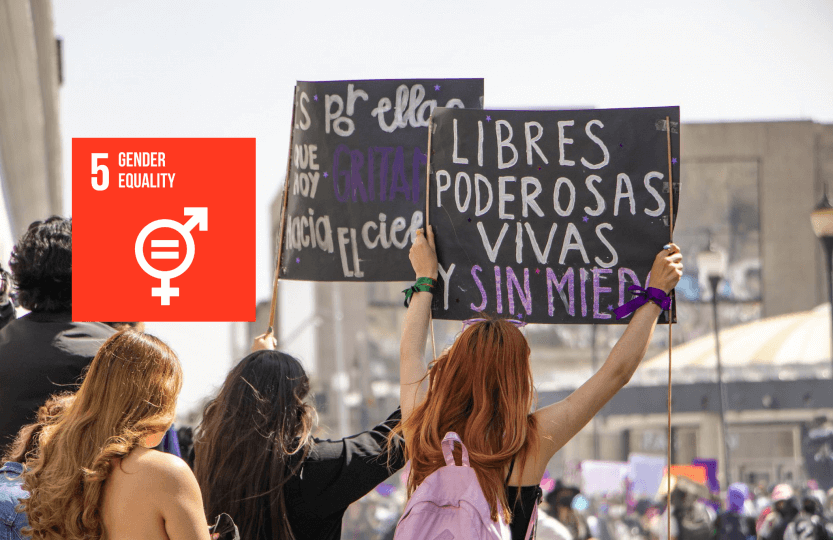 In recent years, the importance of achieving gender equality and empowering women has been highly discussed. It has been a key topic for international institutions, governments, regional agendas, and conferences, such as the COP 26. Each of these entities have always mentioned that we should include more women in science, politics and as leaders of important institutions. This might prompt us to think that inequality has been tackled or even question if a significant difference between being a woman or a man in our society still exists.

The answer is YES, there’s still a difference. It is true that the world has changed a lot since the first wave of feminism, where women sought access to equal education, the right to vote, as well as physical and financial independence. However, there is still a long way to go to achieve true gender equality. A familiar example of this is that – even in the middle of 2022 – there is still a significant wage gap between men and women. In Germany, the difference is 18% and in Europe, it is 13%. Another example of this is the lack of representation in government institutions: the European Parliament is currently made up with only 39.2% women, which is the historical maximum.

Nor should we forget to mention our sisters from the global south and other parts of the world who are currently fighting against a system that neglects justice. These women are redesigning the current legal instruments to counter gender violence. In several states, they have achieved the right to legal, accessible and free abortion. They are seeking to modify the education system to include integral sexual education. We also must recognize the efforts of our ecofeminist sisters who organize, give their time, will, body and life to defend natural resources against large exploitative companies. In this context, it is clear that gender-based abuse is also observed across the environmental scheme during the use, management and/or protection of nature. This shows that being a woman in different social contexts represents different challenges and inequalities.

“That your privilege doesn’t cloud your empathy “

Furthermore, Climate Change is a phenomenon that increases inequality and endangers women’s lives. First of all, the climate crisis does not affect everyone in the same way. Women and minorities are the most affected, as in many cases they are responsible for managing, administering and protecting household resources, such as collecting water, caring for backyard gardens to feed their families, managing the wood from their forests, etc. All these activities depend on climatic health, so climate change threatens their livelihoods and leaves them in a vulnerable position. Moreover, structural inequality limits the capacities of communities to adapt to the effects of climate change, which again makes them more vulnerable.

Considering all that has been mentioned, it is important to analyze gender inequality and its relation to the climate crisis through the lens of intersectionality. In this way, we can include the systemic inequalities that are configured from the overlapping of different social factors such as gender, ethnicity and social class. All the situations of violence and inequality faced by women show that being a woman in this society is clearly a disadvantage. A major question arises: if we are aware of the inequality, why does it still exist?

Our current conditions are a response to a historical truth: we live under a patriarchal system. But what do we mean when we talk about patriarchy? Patriarchy is an unequal hierarchical system, which attributes characteristics, roles, status and behavior to each sex based on their gender. It divides women from men based on a supposed female inferiority, giving men the dominant power. According to Kate Millet, patriarchy is a “system of male domination that facilitates the oppression and subordination of women”.

This same relationship of domination and subjugation experienced by feminized bodies is replicated with nature. Both have been objectified and used as a territory of conquest, as objects of exploitation, and are victims of violence. Nature and women are to a large extent victims of the externalities of economic development.

Currently, we live under an economic system that subjugates territories and nature in favor of a supposed economic development based on accumulated production and consumption. Moreover, this economic system is controlled by invisible forces, under the misguided idea of infinite growth and the fantasy of individuality on a planet with limited resources. Therefore, we can say that the climate crisis and gender inequality have patriarchal roots and are partly the result of supremacist capitalism.

Adriana Guzman, an anti-patriarchal community feminist from Bolivia, goes further and refers to patriarchy as “the system of all oppressions, all discriminations and all violence that humanity and nature historically built on women’s bodies”, therefore she considers that all oppressions, such as the exploitation generated by capitalism, are learned directly in women’s bodies.

The relationship of violence and harm against feminized bodies and the environment comes from the same systemic mechanisms. Therefore, we can state that achieving gender equity means ending the patriarchal capitalist system, which means we need a complete deconstruction of social schemes under a scheme of domination. It also means that we should have inclusion of a diversity of ideas and worldviews with which we could build a better reality for society.

It must be noted that, nowadays the same factors, actors and systems that caused the climate crisis are the ones that pretend to look for solutions. Other voices and ideas are ignored, which creates a lack of representativity and stops the development of holistic, integral and effective solutions. Similarly, it is not possible to reach comprehensive goals and solutions to the climate crisis if we do not address our colonial past and the remnants of post-colonialism, as well as the methods of exploitation of territories. Therefore, the ecological and feminist dimensions are essential to transform the conception and management of territories and of planet earth.

Likewise, being aware that patriarchy exists and that it is a structural problem is only the first step in eradicating it. Marilyn Fyre argues that the power of domination exercised by men has been internalized in society for so long that it will be difficult to break it. This system takes shape in everyday life; what may seem normal and correct does not always follow ethical principles. This can be seen in subtle attitudes like mansplaining to situations that threaten our lives such as domestic violence and femicide. For that reason, it is necessary to question our reality and try to reach awareness about the behaviour, rules and norms in our society. A feminist perspective should be included in the government agendas, discussed in the school and universities and must be recognized part of the climate change solutions.

However, patriarchy still shapes our lives. We must not forget that women have to achieve several improvements to make the world more equal. Our current conditions are the result of the strength of our feminist collectives and women ancestors who were labelled as witches or madwomen while being doctors, philosophers, leaders and fighters for rights. They were women who, with the right conditions, managed to change the social structure little by little. Moreover, women collectives and leaders are still fighting to break the system that was designed for favoured men. We are now looking to end inequality and create a new society where the dominant and abusive relationships between the people and nature are broken. There’s still too much to do, but we will be able to shape a new reality.