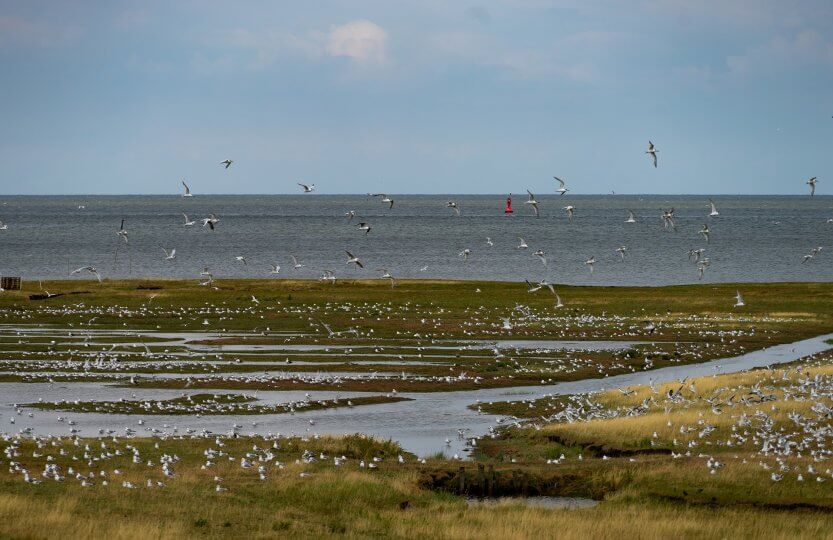 Sandy beaches, large tides, a hotspot for biodiversity … sounds like a beautiful, faraway place? In fact, it is not far from home at all. On the north coast of Germany lies the largest tidal flat system in the world: the Wadden Sea. Given that millions of tourists head there every year – and you might want to visit this beautiful place during your time in Germany as well – I want to talk about the ecological value of this ecosystem, why it needs protection, and what is being done in this regard so far.

There are many factors that make the Wadden Sea an outstanding and valuable ecosystem. The geology and geological processes are very unique, as the coastline is extremely dynamic and constantly shaped by tides and wind. Through these processes, a diverse range of habitats have been created over time, such as large mud flats, saltmarshes, and sand dunes. However, not only long-term dynamics play a role. On a daily basis, the large tides move about 15 km3 of water in and out of the tidal area twice a day. These dynamics make the Wadden Sea a challenging place to live in, forcing its inhabitants – animals and plants alike – to adapt to the changing environment. Nevertheless, it is a major hotspot for biodiversity and the biomass productivity is one of the highest worldwide. Over 10.000 species can be found here and in the course of a year up to 12 million migratory birds stop over. The Wadden Sea is not only of great importance to migratory birds but also to coastal birds in general. It is an ideal habitat for them due to the immense availability of food, lack of mammalian predators, and undisturbed nature of some of the islands. The tidal flats harbor the largest population of lungworms worldwide with about 1 billion individuals. They play an important role for the ecosystem, as they recycle the upper sediment layer several times a year and thus keep the flats sandy.

The Wadden Sea and the immense biodiversity it harbors are nowadays threatened by anthropogenic influences like tourism. Being one of the most popular tourist destinations in Northern Europe, the Wadden Sea area saw over 53 million overnight stays in 2013 [1]. This is not even counting the number of day trippers, which are also in the millions each year [1]. Besides this, climate change and the associated sea level rise is expected to have a great effect on the Wadden Sea ecosystem. An increase in temperature and precipitation is already visible, which has led to an influx of southern warm-water species, northern migration of some cold-water species, as well as changes in the timing of life cycle events [2]. These changes, in turn, affect the food web in the Wadden Sea and might cause an imbalance in the trophic network [2]. Tidal flats and salt marshes might be able to keep up with the sea level rise to some extent, but other habitats might disappear [2]. Besides changes in temperature and sea level, changes in wind patterns and associated storm surges will also affect the Wadden Sea area. An increased flooding risk of salt marshes could, for example, limit the breeding success of birds [2]. Changes in precipitation patterns can also affect the Wadden Sea ecosystems via changes in riverine runoff and estuarian circulation [2].

In recognition of its uniqueness and important value, the Netherlands, Germany, and Denmark have joined forces to protect and manage the Wadden Sea through the Trilateral Wadden Sea Cooperation (TWSC) since 1978, which in turn is coordinated by the Common Wadden Sea Secretariat. The guiding principle of this cooperation is to “achieve, as far as possible, a natural and sustainable ecosystem in which natural processes proceed in an undisturbed way” [3]. Nowadays, most of the Wadden Sea is protected in form of national parks and nature reserves.

The three main areas of work of the TWSC are conservation, sustainable development, and environmental education. They continuously monitor the Wadden Sea in different aspects like wildlife, human activities, and ecological processes and regularly publish their findings in the Wadden Sea Quality Status Report. Additionally, they have conservation projects on various topics. Regarding climate change, they aim to enhance the ecosystems resilience through nature-based solutions. Coastal protection against sea level rise plays an especially important role here. For the protection of migratory birds and their habitat, the Wadden Sea Flyway Initiative has been established. To limit human interference with the ecosystem, a framework for sustainable fisheries has been developed and major parts of the Wadden Sea are designated Particularly Sensitive Sea Areas where marine activities are controlled. The TWSC also aims at creating sustainable tourism while enhancing people’s awareness on the value and importance of the Wadden Sea. The latter is also being done through environmental education programs.

If you would like to get involved in the conservation of the Wadden Sea yourself or are interested in marine/wetland ecology or ornithology, there are internship and job opportunities in this area. Some helpful links are listed below:

Where not indicated otherwise, the source for this blog entry is the official Wadden Sea World Heritage website: https://www.waddensea-worldheritage.org/