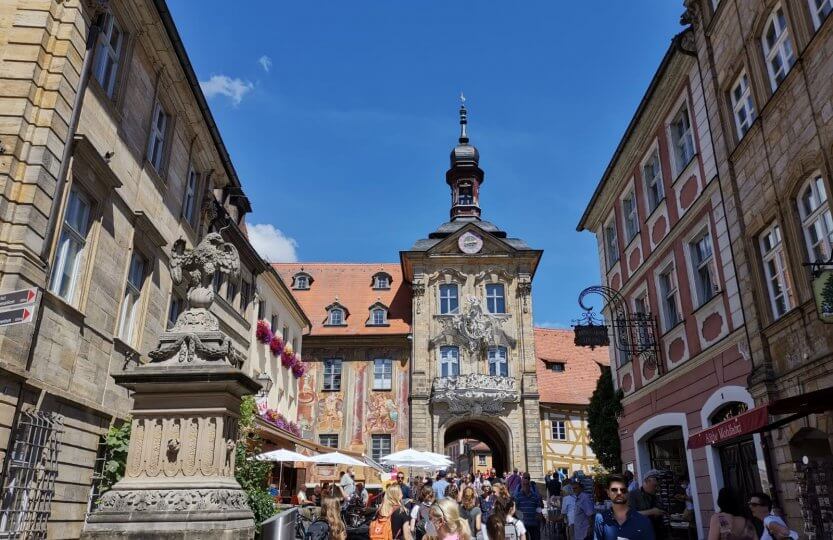 In July the 2020 GCE cohort was finally able to go on the yearly excursion to the Fränkische Schweiz and Bamberg with Prof. Carl Beierkuhnlein and Prof. Eva Lehndorff. It was the first time since the beginning of our studies in Bayreuth in autumn 2020 that our whole cohort could see each other in person, and some students from previous cohorts were also able to join in. Exploring the surroundings of Bayreuth and getting to know everyone better made this excursion a great experience!

We traveled through time as we made our way from Bayreuth through the Black Jurassic, Brown Jurassic and White Jurassic to Bamberg. Our first stop was a quarry in Mistelgau, where we searched for fossils. We mainly found Belemnites, which are abundant in this quarry as it is also called “Belemnitenschlachtfeld”. From the quarry, which represented the Black Jurassic, we drove through the Brown Jurassic and made our next stop in the White Jurassic. Here we visited a cave – the Ludwigshöhle – where Prof. Beierkuhnlein told us more about the geology of the area.

The drive through the Fränkische Schweiz was accompanied by remarks of Prof. Beierkuhnlein explaining to us village names and showing us the best place for a pre-New year’s celebration. The last stop before Bamberg was the stone garden of Sanspareil. After a stroll through the rock formations, we got asked to perform something on the stage of the ruin-theater, which turned into a short Samba dance lesson for this year’s Summer Fête. It was a great time together, where everyone could enjoy themselves. The entire excursion and especially those funny group activities showed that, despite the pandemic and all the restrictions, our cohort managed to become a tide-knitted group already.

In Bamberg we had a little free time, which most of us used to get an ice cream and enjoy the sun while strolling through the beautiful city. The sightseeing went on with a walk through the rose garden and a visit of the dome. Last, but not least, we went to the Natural History Museum of Bamberg. Just like for most the other places of our tour we only had limited time, making it more of a teaser to motivate us to come back by ourselves and explore more of the museum another time. Personally, I was most impressed by the fossils. After having searched for some of them ourselves in the morning, it was astonishing to see what great (both in size and detail) fossils have been found by scientists in the surroundings.

There is nothing like a good German beer to end a great day.  So we stopped by a famous pub to try the typical Bamberger Rauchbier. While opinions on this beer varied, everyone enjoyed the excursion, spending a day with friends, and away from our computers!