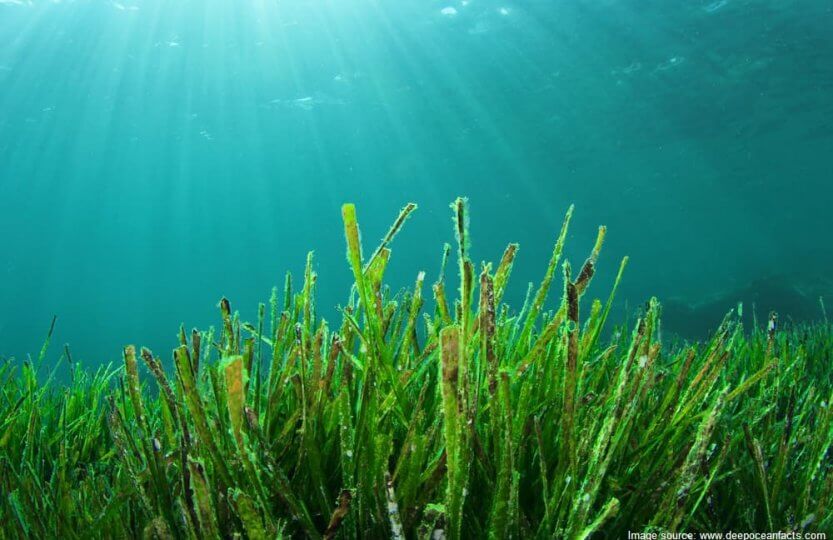 “Blue carbon” is the term for carbon that is captured by the world’s ocean and coastal ecosystems including seagrass meadows, tidal marshes, and mangroves. These areas often contain species diversity, singular ecosystems, unique geological processes, and can be exceptionally beautiful. Despite this, they are often overlooked in conservation, especially when compared to more popularized ecosystems such as coral reefs. But when considering conservation priorities, blue carbon ecosystems are well worth consideration.

Among other vital roles in ecosystem functioning, blue carbon ecosystems are named as they are because they serve an important function in sequestering and storing carbon from both the atmosphere and oceans. As atmospheric carbon dioxide concentrations continue to increase, and anthropogenic climate change descends upon the planet, more focus is being made on the carbon sequestration capacities of ecosystems. Blue carbon ecosystems “sequester and store more carbon per unit area than terrestrial forests and are now being recognized for their role in mitigating climate change.”1 An example of this increased attention is the 2021 UNESCO World Heritage assessment of the blue carbon assets across their sites. The UNESCO World Heritage List includes sites recognized as reflective of humans’ common heritage, “a legacy to pass on to future generations”.2

Of the 50 sites, 21 have been recognized for their blue carbon ecosystems. Examples of World Heritage Sites that received this distinction include the world’s largest unbroken area of mangroves in Everglades National Park (USA); Seagrass beds in Ibiza, Biodiversity and Culture (Spain), added in part for the presence of Posidonia oceanica, the oldest and largest known living organism on the planet; and the Wadden Sea, spanning Denmark, Germany, and Netherlands, which includes the world’s largest tidal flats composed of seagrass and tidal marshes.

Blue carbon ecosystems have stored carbon for millennia and, if functional, are expected to increase their capacity as carbon sinks. Protecting these ecosystems is not simple, however, even for UNESCO World Heritage sites. Local pressures from competing land-use priorities and pollution, in tandem with non-localized degradation from climate change impacts and plastic litter circulating in the world’s oceans, make protection of these areas a ceaseless challenge. And just as they store carbon when functional, they release carbon when degraded or destroyed, making the protection even more critical in the response to mitigating anthropogenic climate change.

One aspect of UNESCO’s approach to protecting blue carbon World Heritage sites is to fund conservation through emerging opportunities in blue carbon markets. This could include the sites qualifying for carbon financing through the United Nations carbon offset program (https://offset.climateneutralnow.org). UNESCO’s recent report quantifying current and potential carbon stocks of World Heritage blue carbon ecosystems is an early step in this approach. Success in protecting these sites not only will support the World Heritage aim of recognizing the common heritage of humankind at specific sites: Protecting these ecosystems and restoring them so that they naturally continue to sequester carbon, will contribute to offsetting global carbon emissions, and can support meeting international goals in carbon emission reductions.