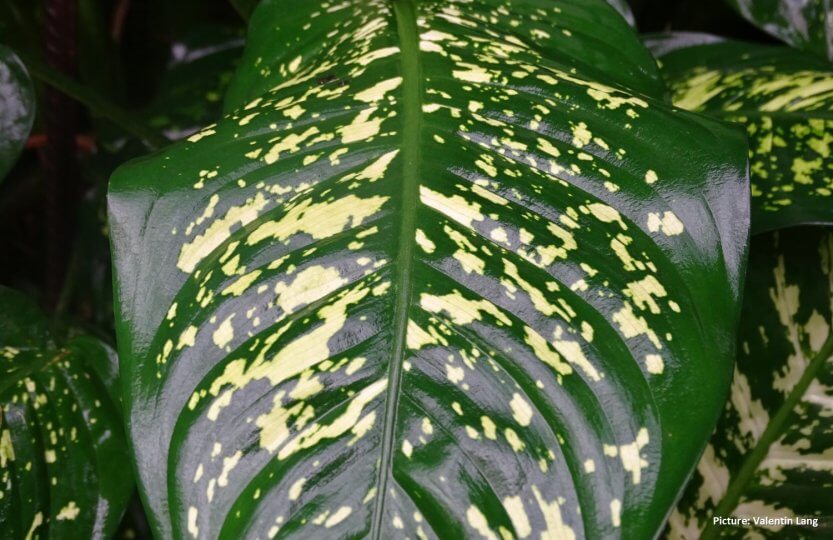 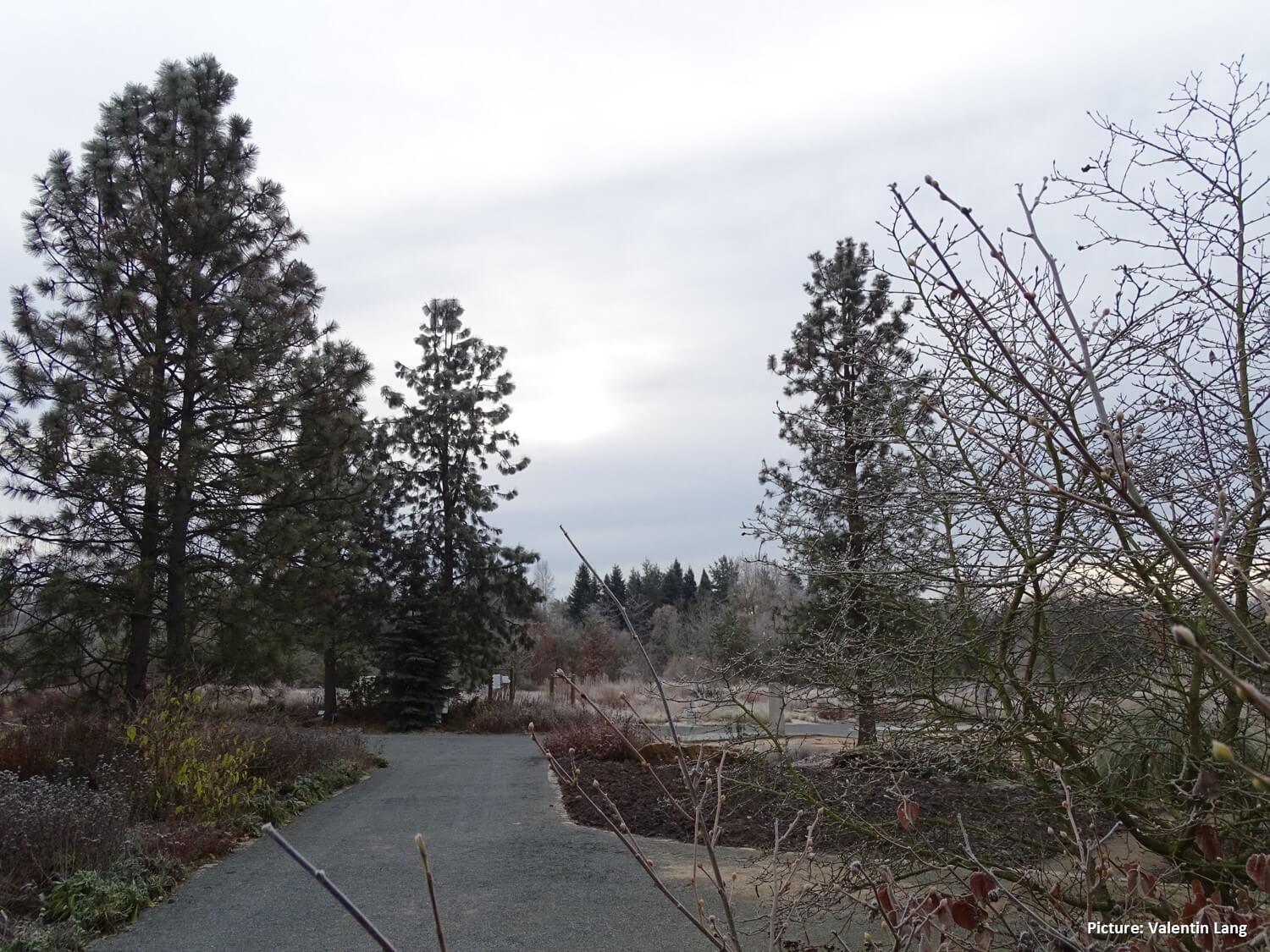 It is a cold morning on the 1st of December, 2019, the first Sunday in advent. Frost colours the campus of the University of Bayreuth in a white scenery. Most students still seem to sleep, the campus is almost deserted at least. However, approaching the Ecological-Botanical Garden unusual activity suddenly takes place: Groups of people are walking from the cold straight into the warm, pre-Christmas decorated entrance area of the greenhouses of the Ecological-Botanical Garden. It is an indication that it is Sunday, shortly before 10.00 o´clock. At 10.00 o´clock at the first Sunday of every month, the staff of the Ecological-Botanical Garden is offering a free tour through the garden or greenhouses. Every tour is about a different botanical topic and every interested person is welcome (however, the language of the tours is in German). This Sunday, the topic is: “´Green` motivates: Plants for the office and at home”.
At the beginning, we are split into four groups. I follow the group of PD Dr. Gregor Aas, who is the head of the Ecological-Botanical Garden.
Our first stop is in the greenhouse showing plants of the tropical forest. Mr. Aas introduces into the topic of today´s tour. In the following, I will summarise the most interesting information:
House plants are a big business in Germany. They are often bought for decoration purposes, however, studies have shown that they can do much more than decorating a room: The green colour of plants has a reassuring effect on humans and increases the motivation. In offices, greenish house plants facilitate the concentrativeness and reduce the stress of the employees.
In addition to that, house plants are directly influencing the atmospheric environment in rooms:
1. Because of the photosynthesis, plants are reducing the CO2 content in the room while increasing the available oxygen.
2. Plants emit water vapour which increases the air moisture in rooms whose air is often too dry.
3. Certain house plants filter toxic substances out of the room air.
But which properties actually does a house plant need to have to be sold in our garden centres?
Usually, house plants are no wild species. House plants are the result of the selection of properties which humans prefer: big florescences and attractive leaf shapes and colours. In addition to that, house plants need to be able to cope with the conditions in rooms which often means little sunlight and dry air (in particular during the winter months) in Germany. That is why house plants often have their seeds in wild species which are growing in specific regions:
1. The natural, wild plant species grows in the undergrowth of (sub-)tropical forests.
Advantage: those species are adapted to little sunlight and warm temperatures all over the year.
Disadvantage: they are adapted to high air moisture.
2. The natural plant grows in the canopy of lowland rainforests.
Advantage: those species are adapted to dry air (e.g. some epiphyte species).
3. The natural plant species grows in semi-deserts and dry forests.
Advantage: those species are adapted to dry air.
Disadvantage: they need a lot of sunlight.
Some house plants are also used temporary only (like poinsettia).
After the general introduction, Mr. Aas shows us some plants in the greenhouses as examples for house plants.
Still in the “tropical forest greenhouse”, he points to a tall plant with the scientific name Ficus lyrata. Some species of the genus Ficus are popular house plants. Ficus lyrata is also called “fiddleleaf” because its leaves resemble the form of a fiddle. The plant originally comes from the rainforests in Western- and Central-Africa and needs some space but, nonetheless, is often used as house plant. 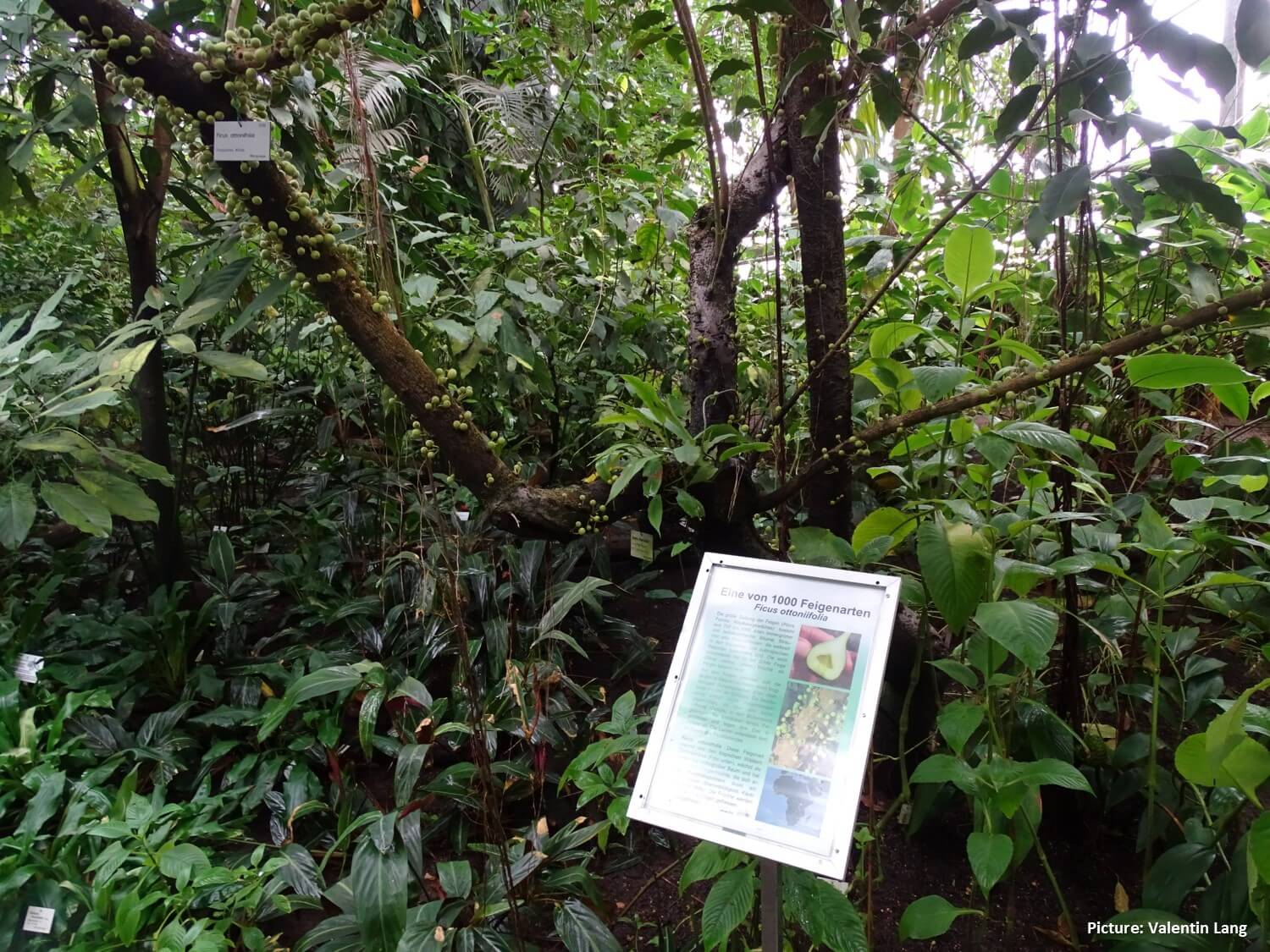 Photo: Some species of the genus Ficus are popular house plants

Next, we are walking into the “cloud forest greenhouse”. Compared to the previous greenhouse, it is becoming cooler. Here, we have a look on Chlorophytum comosum, one of the most commonly used house plants. Because it is so simple to propagate the plant, which has its origin in Africa, market gardens usually do not try to sell them. Chlorophytum comosum is very effective in reducing formaldehyde concentrations indoors. 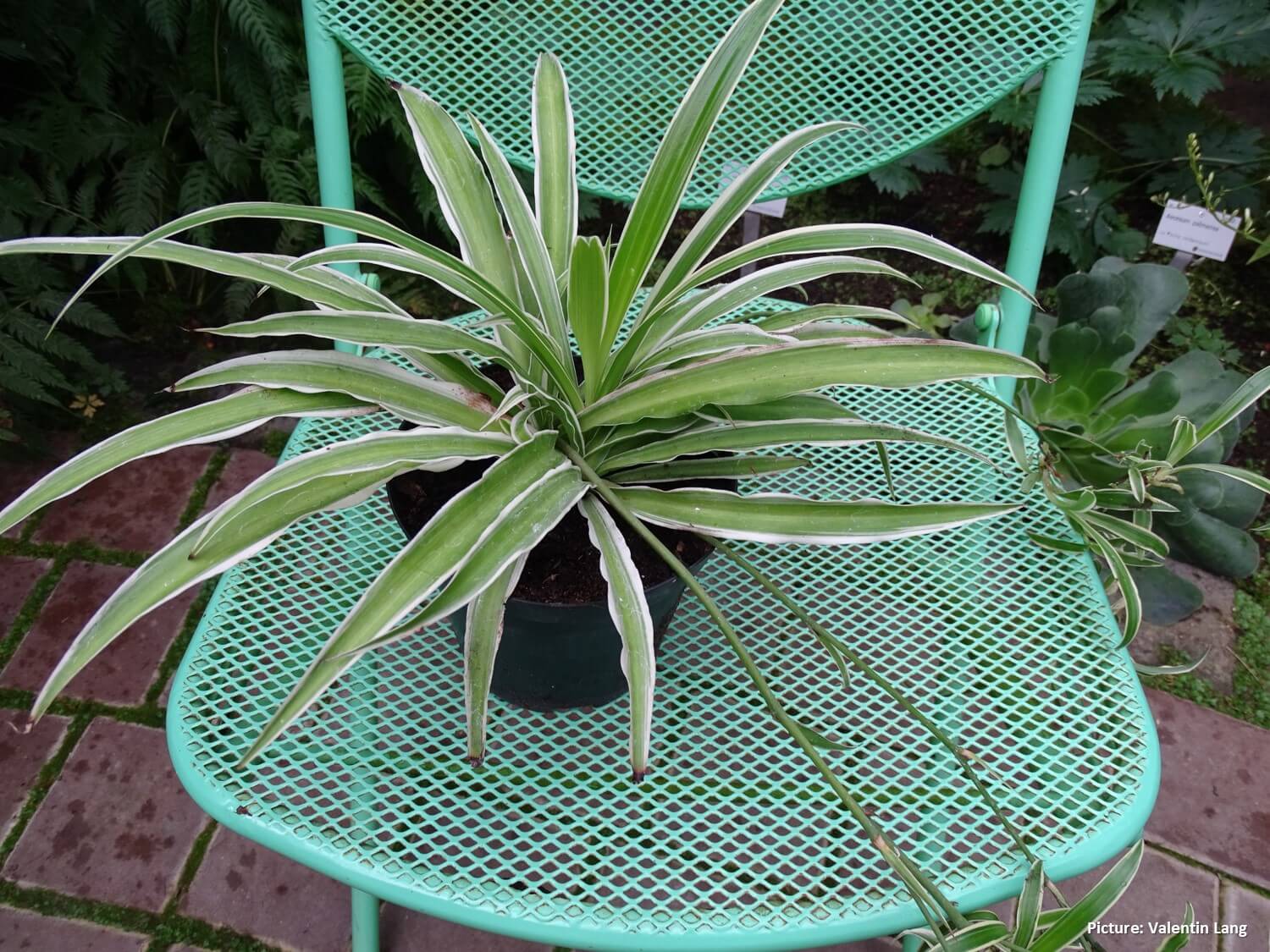 The next stop is in the “dry forest greenhouse”. Here, the air is comparatively warm and dry (at that time, the dry season is simulated in the greenhouse). Plants from those climatic regions can cope with little water and dry air which means that such house plants also survive close to heating installations in rooms. In the greenhouse, Mr. Aas shows us a species of the genus Sansevieria. Species of this genus are mainly growing in Africa, in particular in Kenya and Tanzania, but also on the Arabian Peninsula. They are helpful to “clean” the room air in flats where residents are smoking (mainly benzene and trichloroethane). 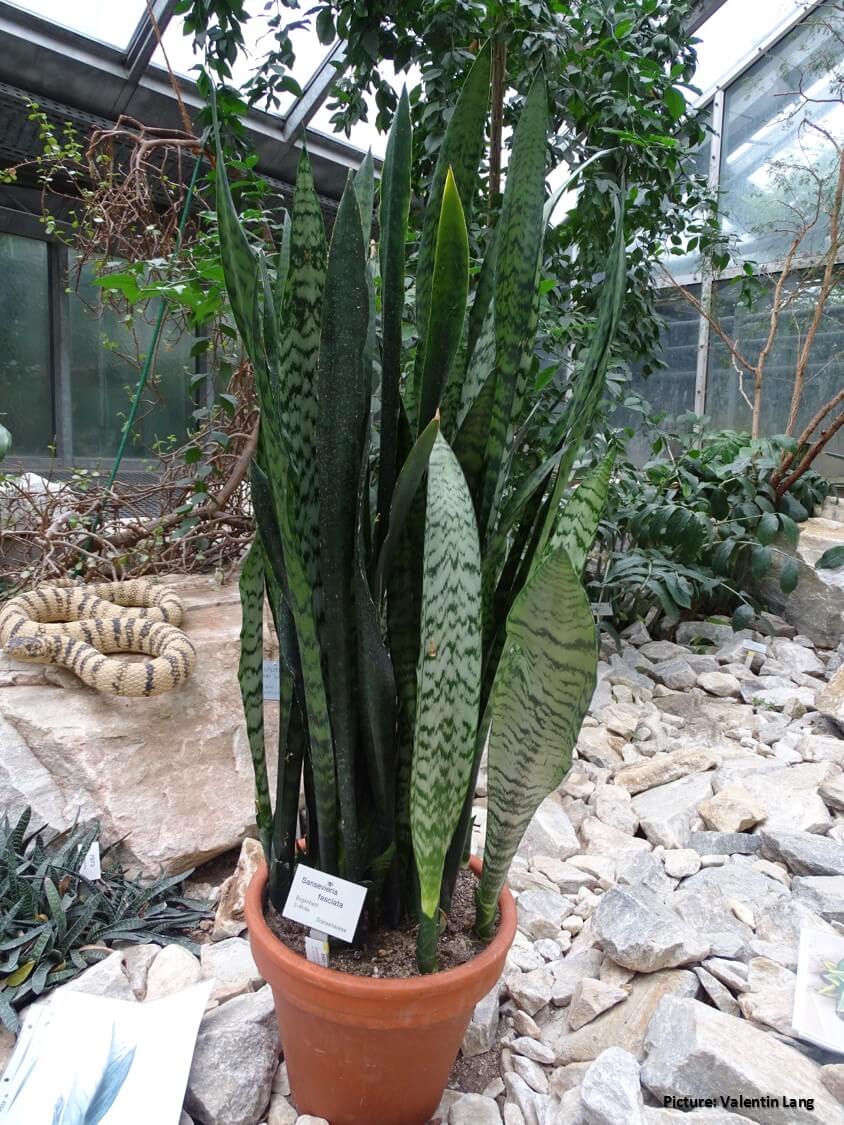 Photo: Species of the genus Sansevieria filter toxic substances out of the room air

In the “Mediterranean and Subtropical greenhouse” the air is cooler and smells pleasant. House plants which have their origin in such climatic regions have a difficult life in houses in Germany. They would need colder winters than the temperature in rooms usually is and it would be better to put them out during summer. Euphorbia pulcherrima, better known as “poinsettia”, is a popular house plant during the Advent season. The natural wild plant grows along the Pacific coast of Central America. In nature, the species blossoms and develops its characteristic intensive coloured bracts during the dry period in winter when the sun is shining less than 12 hours/day. That is why poinsettias are artificially darkened in greenhouses in market gardens in Central Europe from October to make sure that the plants have intensive coloured bracts when the Advent season starts. The plants are usually thrown away when they are wilting although they could be cultivated further. 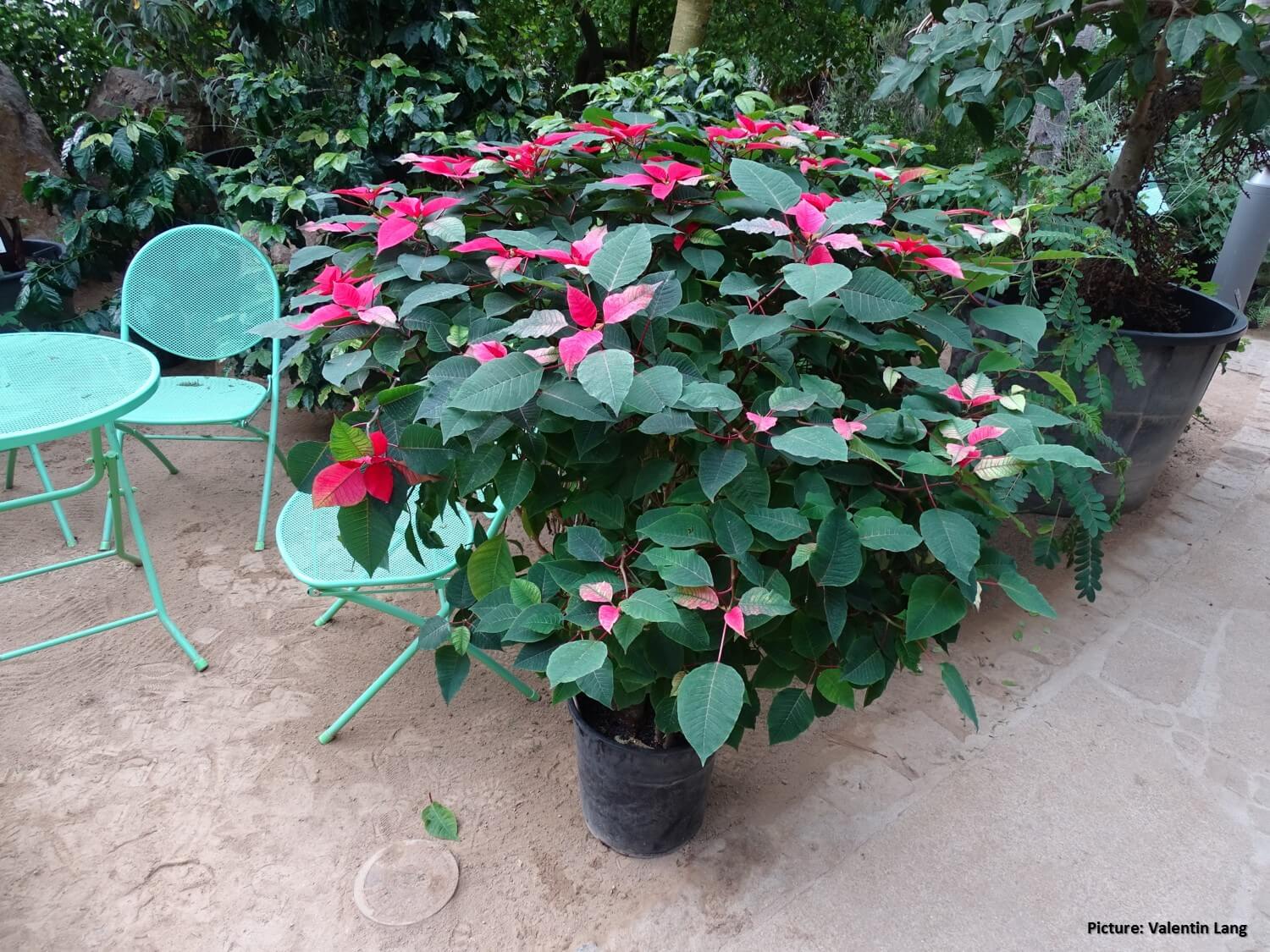 Photo: “Poinsettia” is a popular house plant during the Advent season

Finally, Mr. Aas guides us into the “Mangrove greenhouse”. Here, he talks about Monstera deliciosa which originally comes from tropical regions in America. It is one of the typical house plants and “hip” again these days. After that, the tour ends where it started: in the “tropical forest greenhouse”. 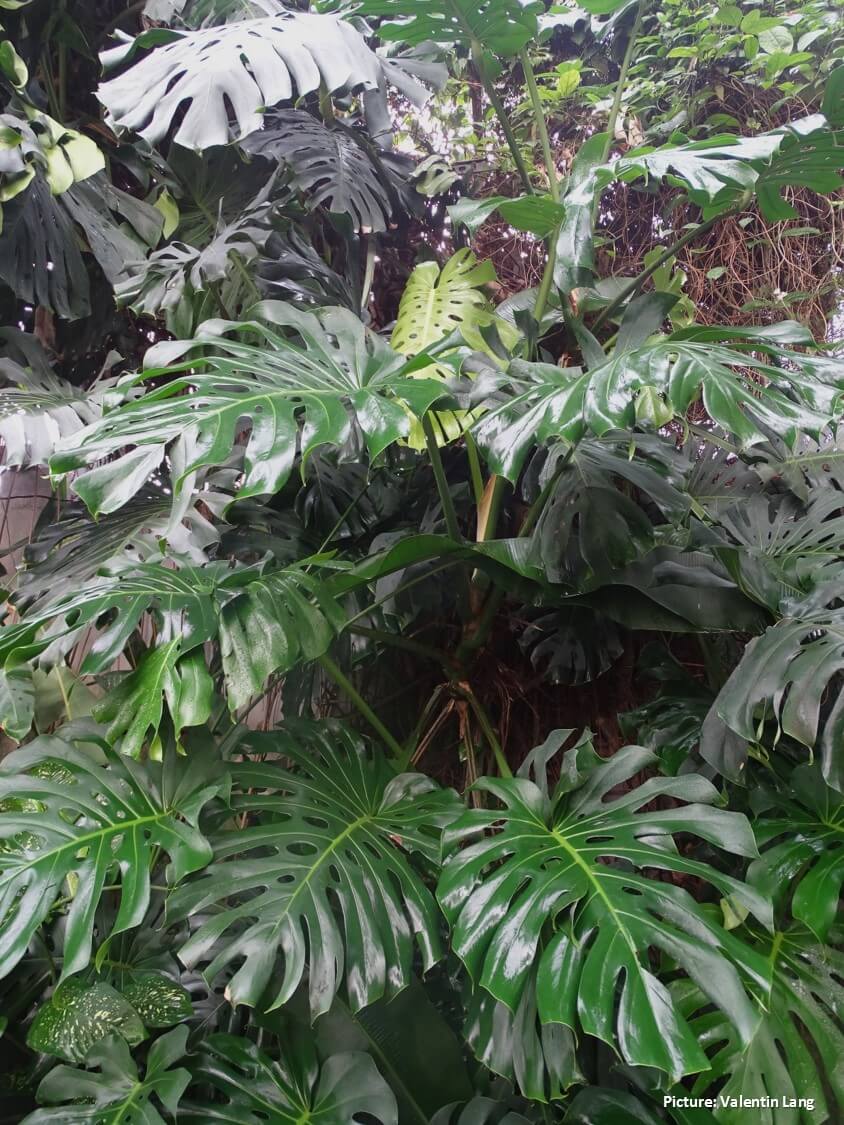 Photo: Monstera deliciosa is a “hip” house plant these days

The botanical guided tour was very enlightening and Mr. Aas had interesting stories to tell about every plant he showed to us.
Next time I am visiting a garden centre, I will not focus on the beauty of the house plants only but also on the functions which the respective plant on our health and well-being has. As a result of the tour, I want to make sure that my first office will be green with the aid of house plants and I recommend others to do the same. House plants are beautiful, motivating and healthy.