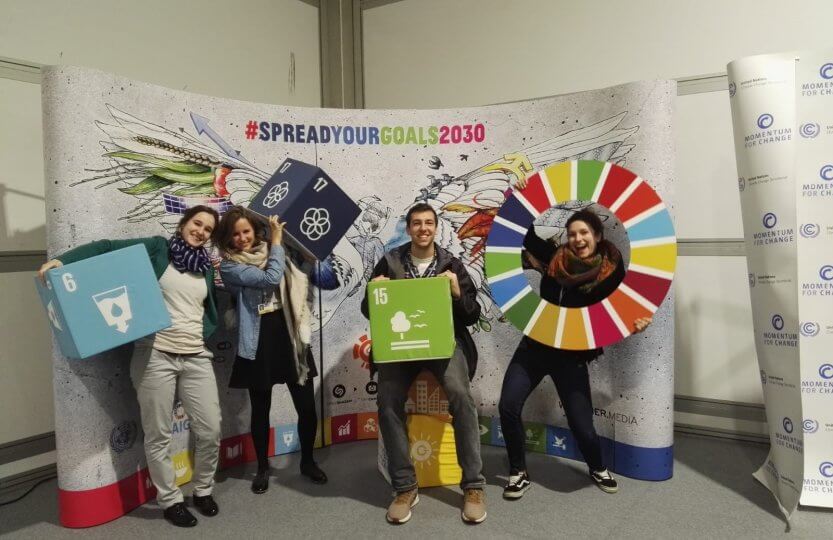 In December 2018, fellow GCE students and I went to the 2018 United Nations Climate Change Conference which was held at Katowice, Poland. I attended the second week of the conference from December 10th to 14th.

As I stayed in Kraków, I used a shuttle bus every day to get to and back from the conference venue. It was always a good time to reflect the day and thinking about what happened. This was my the first time attending a conference of such a size and it was therefore an extraordinary experience. Up on arrival, I got a first impression of how many people are attending this conference, as registration took about an hour. Delegates and observers from all over the world gather at this conference to negotiate, discuss and network about climate change. The venue was split into several areas including the big plenary, all the official side event rooms and also the pavilion section. I spent most of my time in different pavilions because I enjoyed smaller, interactive groups and therefore more intense discussions or question rounds. After many events, there is always time to talk with everyone while having a snack or a drink during the evenings. It was fascinating being able to even take part as a student in these talks and make contributions.

During the week, one always gets into conversations with other people at side events or discussion panels. Especially the mix of people from different backgrounds like economics, politics, science, NGOs or even students, creates a special atmosphere where you feel a lot of motivation, but also a lot of concerns and things which need to be discussed further. One thing that many agree on is that we have enough technology, money and resources but that the implementation of agreements does not work efficiently.

Unfortunately, the official negotiations of the 2nd week were most of the times behind closed doors for which you needed a special permit to attend to. The goal was to establish a rule book on how to implement the Paris Agreement. The outcomes of this conference show that negotiations were definitely not easy this year as nations had difficulties to reach agreements. At the end, a rulebook was developed which will come into force in 2020. It states how governments need to measure and report on their climate change efforts. In my opinion, the results are not very satisfying and leave a lot of uncertainty. All of the rules work on a ‘Naming and Shaming’ basis…I do not believe that this is enough for countries like Brazil or Saudi Arabia to show actions for the protection of our climate.

On the other hand, more and more prominent people start to take actions to inform and create awareness about climate change. Al Gore gave a speech about our climate crisis and left everyone thoughtful but also somewhat motivated to make a difference.

Overall, I can say that this week in Poland was a great time with lots of experiences and new impressions. I am grateful I was able to go there and highly recommend it to everyone. Special thanks to GCE, Bayceer and the ENB for making this experience possible for me.