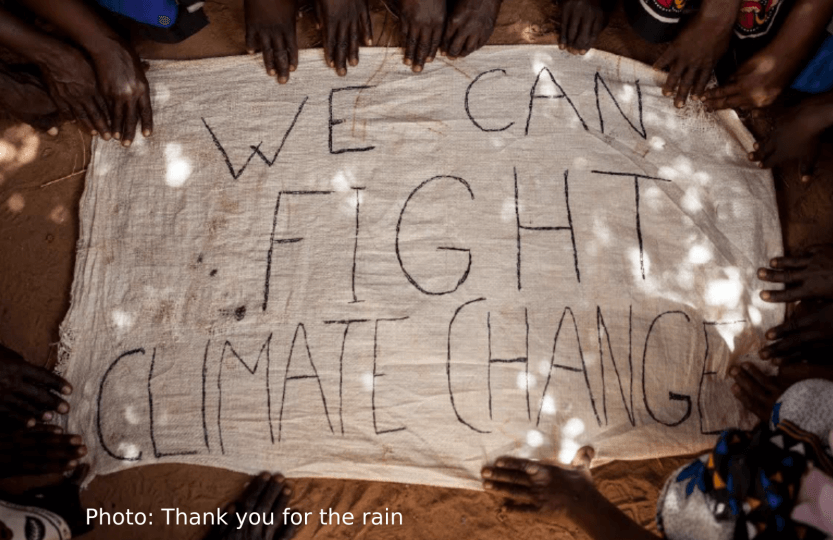 By: Birgit Thies and Katharina Funk

„If you could act, but you don’t, the whole world will hold you responsible. That’s why I give my best.”    – Kisilu Musya

In November 2017, the climate of our planet Earth was all over in the media: The “Conference of the Parties” (COP23) took place in Bonn, where representatives of 197 discussed how to implement the climate goals set at the Paris Agreement 2015. This time, 38 students of the master’s program “Global Change Ecology” had the chance to take part in the COP23 and present their study program within an exhibition booth. Global Change Ecology holds an official observer status for the UN since 2009, so 8 students could follow the climate negotiations close-up in the “Bula Zone”. The other students could attend side events in the so called “Bonn Zone”, see panel discussions about a variety of topics and have a look at all the exhibitions of different programmes, associations and countries. So, everyone returned with many new experiences and insights and maybe also a different view on the world of climate politics. (See also our articles about our experiences at COP23.)

But how to give somebody an understanding of the atmosphere of such an event – the successes and failures, the merits and danger, the swaying between euphoria and disappointment – beyond blog and newspaper articles and pictures? To bring the spirit of COP23 back to Bayreuth – the discussions, the findings, the failures – the students from GCE chose to organize a movie night at Glashaus with a following panel discussion with students who attended the COP23. The movie “Thank you for the rain” from Julia Dahr tells the story of Kisilu Musya, a Kenyan farmer, whose community is endangered by the impacts of climate change. Kisilu records his everyday life in the village with a handheld camera and shows the audience how his harvest is at risk. Due to climate change the long-awaited rain fails to appear and the plants are withering… When the rain finally comes, it is extreme and causes harm to houses and plants alike. Eventually, climate activists learn about Kisilu and his story and invite him to speak at the 21. climate conference in Paris.The movie fee was funded by the BcG Alumni (Alumni association of Biology and Earth Sciences in Bayreuth).

The Glashaus was well-filled for the movie presentation and around half of the audience stayed for the follow-up panel discussion. Alicia Medina Valdiviezo from Peru and Judith Schepers, Martin Baur, Patrick von Jeetze and Katharina Funk from Germany spoke about their impressions from COP23: They felt – similarly to Kisilu – a certain euphoria to be able to attend the world’s biggest climate conference. But then the negotiations stretched over days and all that was going on was mostly strategical manoeuvres. Thus, it was not easy to believe in a successful outcome of the COP. Did the politicians really want to reach an agreement? Did they really care to limit the warming to 1,5°C? Did they realize the importance of immediate action? Patrick von Jeetze stressed that especially the pre-2020 actions are crucial. Almost nobody is aware that Germany needs to become climate neutral within 20 years to fulfil its requirements according to the Paris agreement. Nevertheless, it recently became clear that Germany will fail its climate goals for 2020, mainly because of an enlargement of the transport sector. Judith Schepers talked about the island nation Kiribati, which will be destroyed in the near future – by hurricanes caused by climate change. Its inhabitants have only one option: humane migration. And Alicia Medina Valdiviezo indicated that especially indigenous people will be affected by climate change. She illustrated how indigenous communities do have their own coping mechanisms which are nevertheless presumed to be “non- scientific” by the science community. This traditional knowledge should come to the fore at climate conferences.

The audience discussed mainly about the (non-) action of the German policy as well as possibilities to motivate people to take more action. And even though climate change is an immense challenge for humanity, the GCE students had the feeling that the visitors went home caring a little bit more about climate change than before. And even though these conferences seem to make very little progress – the Paris Agreement was a major breakthrough in climate politics. Nearly every country has signed the contract, acknowledging the the issue of climate change and the urgent need for action. Now we have to make sure that the Paris Agreement is implemented accordingly. This is why these conferences are immensely important nevertheless.