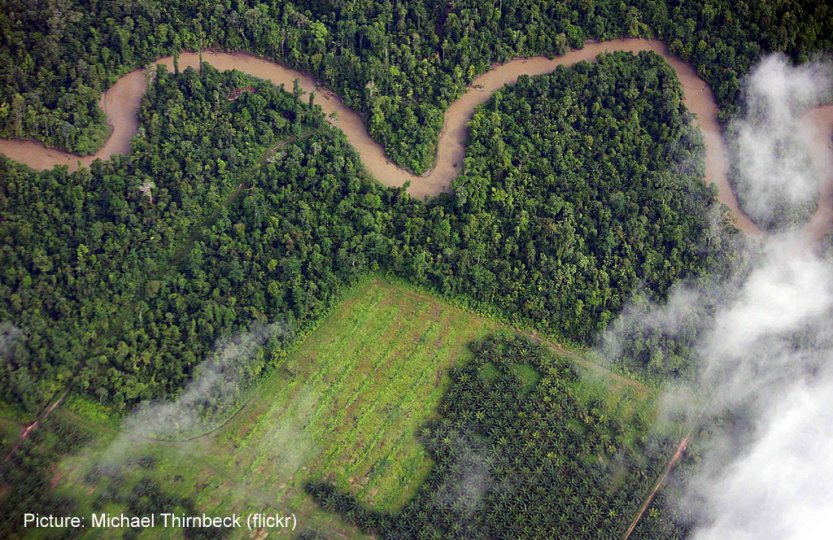 Smoke swells from the thick, green canopy of Indonesian rainforests. Orphaned orangutans cry for their mothers who were killed in the bush fires. Local inhabitants, children, women, men are inhaling the yellow swaths, only protected by dirty, once white masks; the air is filled with almost invisible particles of ashes coming from the burning forests. These are some of the pictures that circulate in the global media when, again, rainforests in tropic countries are burned down. The space the forests occupy is otherwise needed: for palm oil plantations.

But why is the demand for palm oil that high? It is everywhere, literally. We can find it in our food – the most famous example might be Nutella – but also in other groceries like muesli or pastry. Sanitary products like body lotions, shower gels, deodorants – a huge majority of them contains palm oil. The oil is obtained from the shell of the fruit by pressure. The fruit of the oil palm is much more effective – compared to sunflowers or rapeseed which both are also used for oil production, the oil palm needs much less area to grow. As we are living in a consumption-based society, the call for more palm oil gets louder; the number of plantations is rising and thus the area of pristine tropical forests is shrinking.

Ecological and financial impacts of the palm oil industry

According to World Wildlife Fund (WWF), the impacts of palm oil production are alarming: Fire clearing leads to habitat loss and fragmentation of habitats that are normally home to many endangered species. The fires of the burning forests release substances into the air such as carbon dioxide. They pollute the air and have therefore heavy impacts on the health of the people living in the areas where fire clearing is actually happening. WWF also mentions climate change as a consequence because tropical forests are major carbon sinks – by burning them, the CO2 stored in the plants is released into the atmosphere and thus accelerates the warming of our planet.

A FAO report from 2014 revealed that the top exporters and therefore also top producers of palm oil are Malaysia and Indonesia. A figure in this report shows that India and China are by far the biggest importers of the oil produced in South East Asia: India bought palm oil from Indonesia for 4340 million dollars, China came close by spending 2389 million to Malaysia and 1868 million dollars to Indonesia. Obviously, the palm oil market is booming. But Germany can’t deny its own portion of the share: It is one of the major importers of Malaysian palm oil as well. According to a WWF Germany report, Germany imported 1,5 million tons of palm oil in the year 2013; most of that palm oil is used for bio fuel and food production.

Palm oil is evil – this thought has been fixed in the minds of many. But there is (as in so many cases) also another side of the medal. In 2016, the WWF Germany has published a report about the consequences of palm oil cultivation. In this report, also alternatives are analysed: It finds that replacing palm oil with alternative oils like coconut or soy oil would even worsen the situation because they need much more area to grow and produce less oil.

The solution for this dilemma is actually quite simple. If we stopped using palm oil as biomass fuel and if we established a more conscious consume of chocolate, chips, other sweets and instant meals, we could reduce the current use of palm oil by 50%.

But instead of only saying if, if, if we should start acting. Therefore, I am going to start an experiment next week: I want to figure out, which products in my day to day life contain palm oil or palm-oil-based ingredients and try to reduce them. In the last year, I already tried to reduce the use of those products, but I guess that there is still a lot to do. But as the WWF example showed, a total ban of palm oil is not the way to go. That is why I also want to check for alternative solutions or ideas how to replace products that are a threat to our environment.