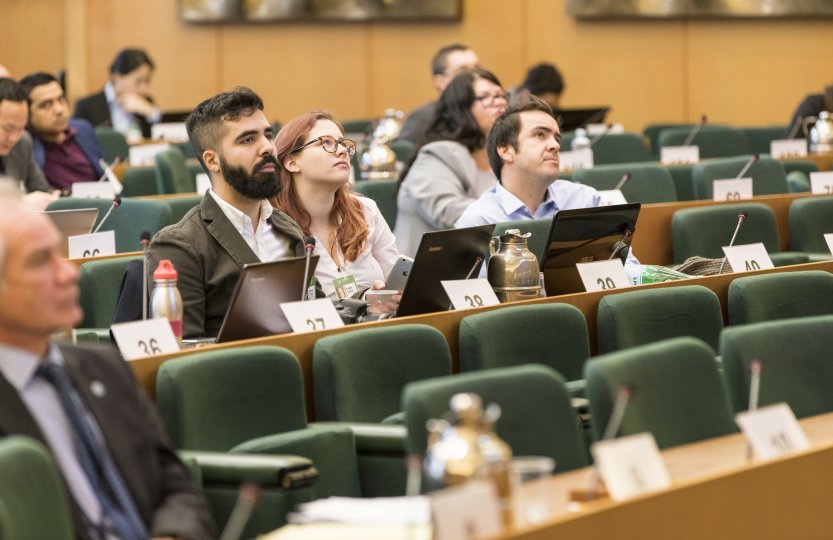 Save the trees, stop deforestation and prevent climate change. These were some of the main goals of the cross-sectoral Halting Deforestation conference organized by the Collaborative Partnership on Forests (CPF) with the participation of the International Forestry Student Association (IFSA) at the United Nations FAO headquarters in Rome, from February 19th to 22nd, 2018.

Being the only participant from Armenia, I would like to share my experience as well as do my best in involving Armenians in the implementation of the UN Sustainable Development Goal (SDG) 15.2 Halting deforestation target.

To halt agriculture or not – that is the question

Since a lot has been said about the conference, I would rather concentrate on its “gaps”. One fundamental statement of the conference was “industrial agriculture is the main driving force of deforestation”.

But first wait. Do we all know what really drives agriculture? Let’s think about those developing countries whose economies mainly depend on agriculture. Would it be possible for a country that cannot even fill their people’s stomachs to start caring about the environment and the future of the planet? I don’t really think so.

Halting deforestation but promoting at the same time Zero Hunger (SDG goal 2.4) may therefore not align at first sight. The Halting Deforestation conference could have addressed this issue better by focusing on people’s current needs rather than on future political agendas. Discussions left out of sight opportunities for agricultural sustainability that maintains ecosystems, strengthens climate change adaptation capacity and extreme weather resilience (droughts, floods, and other disasters) as well as progressive improvement of land and soil quality.

Yes. 80% of deforestation is caused by agriculture,  but for some countries agriculture is the only way to keep their economy running and to secure livelihoods.

Other drivers of deforestation that weren’t assessed

Even though the conference served its purpose by reviewing on-the-ground initiatives to combat deforestation, it didn’t directly reduce the risk of nor provide immediate solutions to deforestation. Evidently, there were some drivers of deforestation left out of the discussion:

If not aware of the real dangers yet, we can perhaps make an urgent call with the case of Mining in the Amazon Rainforest.

To halt or not illegal mining in the Amazon

In the Amazon region, logging and mining are the main environmental threats. Both destroy the forest and are slowly converting this major carbon sink into a carbon source, counteracting climate change.

Since 2000, mining in the Amazon region has been actively developed, destroying more than 10% of the Amazon Rainforest. According to the WWF, iron, gold and copper are found in the Amazon forest and the overexploitation of these minerals is increasing dramatically.

Gold mining is however not only bad for the environment but has also chronic socioeconomic consequences. As our Peruvian GCE Student Carla Madueño explains in the following lines:

“Illegal mining in the Amazon is a matter of concern for all. This rainforest is also called green gold that must be cut down so that illegal workers can extract the precious gold contained in the soils of protected forests. The use of highly toxic metals (cyanide, metal oxides, mercury, sulfuric acid) poses an immediate health threat to humans and the entire biome.

Yes 40 % of our Peruvian Amazon soils are rich in gold, but 100% are rich in green gold (biodiversity and ecosystem services).
That is the real opportunity we must not miss, as it is our own human survival that depends on it.

Peru’s rainforests are rich in gold. That is our blessing and curse. 40% of the soils of the Peruvian Amazon region are estimated to contain gold, which has been transported throughout millenia with erosion mechanisms from the upper Eastern Andes to the lower Western Amazon basin.”

Mining in the Amazon forest is by far not the only example. Ghana, Zimbabwe, South Africa, the Congo basin, Indonesian forests and the Philippines suffer currently under illegal and unmanaged mining.

We do believe that youth is the future and a strong driver forwards. Any problem can be solved with the support and efforts of the youth. For instance, the Wijsen sisters banned plastic in Bali and the Dutch boy Boyan Slat is fighting for plastic-free oceans.

We believe international youth organizations such as IFSA and the Youth in Landscapes Initiative are as well brilliant examples of youth caring for the environment and connecting cross-sectoral to the rest of the world to figure out solutions now.