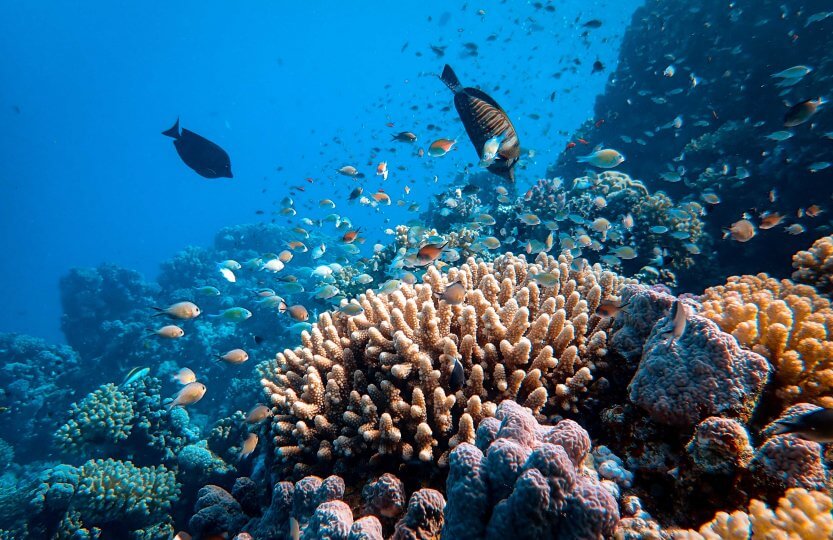 The health of the ocean is under severe threat, despite its importance for people and the planet. To combat this, the United Nations dedicated SDG 14 to ocean issues, and has so far held two Ocean Conferences – one in 2017, and one very recently in 2022. To learn more about the ocean and my own experience assisting at the 2022 UN Ocean Conference, read on.

The Ocean: benefits, challenges, and solutions

Our Blue Planet, and all of its life, depends on a healthy ocean. Covering over 70% of Earth’s surface, the ocean plays a key role in regulating the climate, absorbing and transporting heat via sea currents from the equator to the poles; and it also produces half of the world’s oxygen. Under climate change, scientists estimate that the ocean absorbs at least 25% of CO2 emissions and has captured 90% of excess warming due to greenhouse gasses over the last 50 years [1,2]. Furthermore, the ocean is home to around 250,000 described species, with scientists estimating that another 700,000 are undiscovered [3]. Such diversity of life is possible due to the array of rich habitats within marine and coastal ecosystems, including coral reefs, seagrass meadows, kelp forests, mangrove forests, as well as coastal shores.

People – and economies – also directly rely on the ocean. It is estimated that around 680 million people live on the coasts, and this number is expected to grow [4]. Additionally, the livelihoods of over 3 billion people depend on the ocean. Marine and coastal areas contribute significantly to the food, tourism and recreation, and transport industries. The global market value of ocean resources and its associated sectors is estimated to be around US$2.5 trillion per year [5].

Yet, the triple planetary crisis of climate change, biodiversity loss, and pollution is causing ocean health to decline, putting these benefits at risk. Rising temperatures are contributing to impacts like sea level rise and marine heatwaves, while the absorption of excess CO2 leads to ocean acidification [4]. Excess nutrient pollution is leading to algal blooms, which can produce harmful toxins, as well as dead zones where there is no oxygen, which can grow to thousands of km2 in size. Increased production, consumption, and improperly managed disposal of plastic pollution has resulted in millions of tons of plastic reaching the ocean yearly (up to 12 million in 2010) [6]. Wildlife can then become tangled in debris, or ingest it and starve with stomachs full of plastic. Unsustainable use of ocean resources, including practices such as overfishing, have also decimated wildlife populations and ecosystems.

To combat problems like these, the United Nations embedded a goal supporting Life Below Water within the Sustainable Development Goals. Specifically, Goal 14 looks to “conserve and sustainably use the oceans, seas and marine resources for sustainable development”. This Goal was formed with the recognition that the ocean and its resources represent a tremendous opportunity for people and the planet – if we properly use them.

Clearly, supporting the realization of SDG 14 is crucial for sustainable development. To reinforce this objective, the UN has held the Ocean Conferences. The first Ocean Conference took place from 5 to 9 June 2017 in New York City, sounding the alarm about the state of our oceans while providing a space to discuss solutions and build partnerships. Additionally, from 27 June to 2 July 2022, over 6,000 participants – made up of individuals from civil society, the private sector, states and governments, the scientific community, and more – gathered in Lisbon, Portugal for the 2022 United Nations Ocean Conference. I had the opportunity to support the Conference from the preparation phase through its conclusion in Lisbon.

Such a large event does not happen without a lengthy preparatory process. My main role was to provide assistance to the Sustainable Development Officers in the UN Division for Sustainable Development Goals (Department of Economic and Social Affairs) as they worked to actualize the Conference. For me, this looked like attending meetings and taking notes on logistic and substantive aspects of the Conference, as well as related topics. Along with other students, I prepared draft documents such as summaries, remarks, and presentations for supervisors to review, and provided virtual support such as email correspondence, creating or uploading documents, maintaining databases, checking registrations, and updating the Conference website as needed.

A main outcome of the 2022 UN Ocean Conference is the Political Declaration, “Our Ocean, Our Future, Our Responsibility”. During the preparatory process, co-facilitators held consultations with Member States to get their feedback as the draft document was revised. The document contains a list of science-based and innovative actions needed to support the ocean and those who rely on it for sustainable development. In the end, the final draft was accepted and successfully adopted at the 2022 UN Ocean Conference.

The Conference programme included both plenary sessions and eight interactive dialogues. During the plenary sessions, Member States and other stakeholders could make interventions. This provided a forum for sharing their experiences, problems, solutions, and more. The eight interactive dialogues centered around different ocean and SDG-related topics. For each of these Dialogues, a panel discussion with experts in each field was held, followed by a discussion period where stakeholders could give statements.

A summary for each plenary session and interactive dialogue was to be prepared for inclusion into the final Conference report. Part of my responsibility on the ground was to provide support by taking notes at these sessions and submitting these to the lead, who would then prepare the summary for approval.

To recover and retain the health of the ocean, actors make voluntary commitments to support the implementation of SDG 14. Any initiative which contributes to the advancement of SDG 14 may be submitted as a voluntary commitment. These projects, either carried out by individuals or as partnerships within or across sectors, represent concrete steps taken by stakeholders to create positive change in the ocean and to reverse its decline. You can find information regarding any of these initiatives within the registry of voluntary commitments, which houses all commitments made since the first Ocean Conference in 2017. Currently, the number of commitments stands at 2,093.

Do these commitments make a difference? A 2021 analysis of their impacts found that voluntary commitments have led to at least 3.3 million km2 of new marine protected areas. Many litter-collecting and awareness-raising initiatives have been held, and governments have implemented bans on single-use plastics under the voluntary commitment framework. Enhanced partnership and scientific cooperation have led to benefits in capacity development, technology development and transfer, and ocean governance. These positive impacts will increase, given the many strong commitments made at the 2022 UN Ocean Conference.

Through this experience, I was able to learn both about ocean issues by listening and speaking directly to top experts across disciplines. I heard how these issues were impacting people and different ways to tackle them; as well as how to sustainably use the opportunities of the ocean. I saw concrete action, partnerships, and cross-sectoral collaboration, and diplomacy driving innovative solutions through the voluntary commitments and the adoption of the outcome document by governments. I also gained insight into the interconnections between the SDGs and saw this reflected throughout the Conference and its lead up.

Overall, being able to take part in the Ocean Conference was a valuable experience, made particularly rewarding by the fact that I was involved during (a portion of) the preparation through the conclusion of the Conference itself. This allowed me to see how the scientific and environmental dimension mixes with the economic, social, and political aspects of sustainable development at different stages to ultimately culminate in the Ocean Conference and its outcomes. At the same time, I had the chance to see first-hand how the UN supports and facilitates all these pieces, and more, for sustainable development.