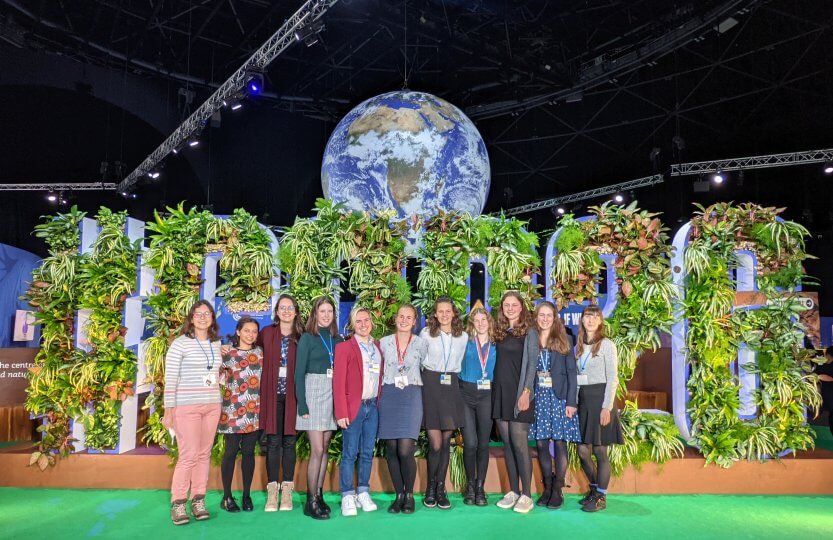 This article will give you insights into the outcomes of the COP26 including personal experiences from us students.

Ahead of COP26, expectations were high. These hopes were born out of urgency — the window to avert the worsening effects of climate change is rapidly closing. We know what is happening and we know why. The question now is, what do we do about it? To many, this conference was the place to get everyone in the room to answer this. What progress did we want? From the conference, many wanted to see more ambition. To achieve net zero by 2050 and limit warming to below 1.5°C, emissions gaps must be closed. This includes phasing out fossil fuels and supporting clean energy transition. We wanted to see agreements made on finance, delivering on the $100bn promised to developing countries as well as supporting their adaptation and resolving loss and damage. We wanted to see everyone working toward solving a common problem, taking accountability, and putting forth inclusive solutions. To tackle the current crisis, we need to work together and accelerate climate action in a just and concrete way – and this is what we wanted to see in Glasgow.

COP 26 was supposed to be the next world-changing Climate Conference after the Paris Agreement in 2015. This fact combined with the opportunity that GCE students have— to attend the UN Climate Change Conference as observers— created a very exciting moment that we were all looking forward to. After week 1 concluded, it was time for the second group of students to participate in the event as week 2 delegates. Thus, eleven students made their way to Glasgow (or more precisely, to small towns called “Bathgate” and “Barrhead,” where our accommodations were located). Every day, after approximately one hour train ride during beautiful early morning hours, we would arrive at the Scottish Exhibition Centre.

Our first impression and probably the most mentioned word of the week: OVERWHELMING. It was really overwhelming to be at a conference where milestone agreements are supposed to be negotiated. COP26 comprised more than 20.000 attendants, numerous side events from different NGOs and GOs, and pavilions’ expositions (over 90!) from countries and organizations, where more events were held about their environmental initiatives, issues, technology as well as their culture. Additionally, some meetings were regularly scheduled, such as coordination meetings for different groups like RINGO (Research and Independent NGOs), under which GCE falls. We became more confident day by day, as we explored the venue and figured out how to arrange schedules for side events and the official negotiations.

It was interesting to attend side events about different topics like peatlands, indigenous peoples’ rights, and carbon green washing. Furthermore, it was exciting to see how the draft version of the agreement was being negotiated. In the second week, a draft version of the COP outcome was already developed, and as a result “only” small adjustments were in debate. These events turned out to be really fascinating, as we learned “how can you discuss brackets in one paragraph for four hours” or “how to change words in paragraphs so they have a slightly different—but not too different— meaning.” We also heard discussions as the many nations searched for consensus to set up a very important element: the agreement itself.

Another highlight for students was being able to meet Prof. Charlotte Streck, the lecturer for the GCE course of Climate Diplomacy (C1 Module: Climate Policies and Economies). While some had met Prof. Streck via Zoom during the Winter 2020/2021 Semester, COP26 marked the first time that students could interact with her in person. During a meeting with Prof. Streck in the “Action Hub” of the event centre, students were able to ask questions and gain insights into the COP experience.

Each day at COP had a main theme set by the presidency. Week 2 started off with the Presidency Programme focusing on adaptation loss and damage. Major events as part of this included “Exploring Loss and Damage”, “Adaptation Fund Contributor Dialogue and Reflections from Recipients and Stakeholders”, and “Dialogue on Climate Finance”. Other major events were the “Annual gathering of indigenous knowledge holders (Part II)” as well as a speech by former US President Obama. Tuesday’s Presidency Programme was gender, science and innovation, with events such as “Advancing Gender Equality in Climate Action” and “Accelerating Innovation: collaboration for a net zero future” as some examples. The Wednesday theme was about transport, while Thursday focused on cities, regions, and the built environment. Friday was left free for the official closure of negotiations, although the COP26 continued into the weekend. In the end, there was no official closing ceremony on Friday. This happened instead on Saturday night, with some finalised agreements and agendas that had already been declared closed since Thursday evening.

Civil society and action outside the negotiations

Though the goal was to have “the most inclusive COP ever”, many have termed COP26 as rather exclusionary. This was especially the case for those from the Global South, due to the regularly changing COVID-19 travel regulations, travel costs, exorbitant accommodation prices, lack of interpreters (though our own week 2 attendee, Diana Pineda, was able to fill in!), representation and voice in the actual negotiation rooms where critical decisions were made. Blocking out the voices of those most impacted by climate change and injustice prevents us from delivering the outcomes needed for all.

Therefore, a counter summit to COP26 also took place. “The People’s Summit for Climate Justice” was a society coalition of groups and individuals mobilized around climate justice during the COP. Among many other groups of people that didn´t have access to the COP26 (but wanted to participate) were environment and development NGOs, trade unions, feminist, faith, youth, and indigenous groups, as well as migrant and racial justice networks. Unanimously, the message was clear: “We are watching, and we demand climate justice!”. A series of demonstrations/protests took place throughout the summit, the largest ones happened on November 5th and 12th organized by Fridays for Future Scotland, convoking a big mass of people outside the venues, including participants from the civil society but also COP attendees.

COP26 was considered a last chance to keep 1.5 °C alive. Plenary and negotiations closed on Saturday, November 13th, one day after the original schedule. In the end, parties adopted the “Glasgow Climate Pact”, and finalized the outstanding elements of the Paris Agreement. After two weeks of negotiations, the main outcomes from COP26 are:

Although COP26 achieved some progress, environmentalists criticized the pact, mainly regarding coal power use. The total abandonment of coal was modified at the last minute under the pressure of India, China, and other major consuming countries. The official document now refers to the “phase-down of inefficient fossil fuels”, rather than the “phase-out of fossil fuels” — as originally proposed.

Have the initial expectations been fulfilled?

There has been a lot of criticism regarding the final COP26 outcome. In order to keep 1.5°C alive, the initial agenda of the COP26 contained the point “HOW to reach the 1.5 °C goal”. Many were looking forward to the concretization of this goal, since it is still unclear how to get there. However, on the first day of the COP, the UK presidency proposed to take this point off the agenda without opposition from the participating delegations. It was also pointed out that, even if countries would fulfil their announced NDCs, it would not suffice to reach the 1.5 °C goal. So, a strong appeal was made to the participating states to formulate more ambitious NDCs. Therefore, this topic has not been further discussed and remains fuzzy in the Glasgow agreement. Furthermore, human and indigenous rights in general remain to become more present and formulated in the agreement.

This quote by a representative at the COP summarizes the mood on the last day of the COP quite well: “Avoiding failure is not a success.” The last-minute draft presented by the Indian delegation obviously weakened the affected article significantly. Under pressure to reach a result, COP president Alok Sharma declared the draft, despite the disappointment of several delegations, as accepted and tearfully apologized for the final outcome. A very criticized fact, also in the context of the result, is that the number of fossil fuel lobbyists was higher than the largest governmental delegation (which was Brazil, with 479 delegates).

Thoughts regarding next COP in Egypt

The next COP is going to take place in Egypt. Some say that this might be a good setting for holding such a conference, since the country is a rising economic power and therefore some sort of connector between developed and developing countries. Besides, it might symbolize a focus from the African continent — strongly affected by climate change — in the upcoming negotiations. However, there are some concerns about COP27. In Glasgow, civil society and its commitment in the form of protests and side events outside of the so-called Blue Zone was a highlight. These activities might be limited at COP27, given the state of human rights, especially women rights, and the right to demonstrate in Egypt. The fact that the conference is going to be held in Sharm el-Sheikh, the largest tourist resort of Egypt, might give the impression that the host country wants to paint a certain picture. However, after years of unchecked abuse by government authorities that has landed thousands in prisons, blocked hundreds of independent and opposition media websites, and brought accusations of extrajudicial killings by Egyptian security forces, The New York Times reports that there seem to be attempts of progress in response to international pressure. Overall, it remains to be seen how the next COP will develop.

Why is a global climate conference, despite the criticized points, still important?

When we consider the COP, we must remember that it is a negotiation space. While this means that there is the opportunity for shared decisions on the global scale, the nature of negotiation and the inevitable compromises that must be made for so many states to agree mean that not everyone will be fully happy with the outcome. The point is to make progress. And, while the outcome might have fallen a bit short of our expectations, we did make progress. Beyond the official outcomes, there was space for actors across sectors to meet and share ideas and projects for implementation. Additionally, we saw a galvanized civil society contribution. As we move away from COP26, this push for climate action and justice will not end – and we hope to see this reflected more clearly in COP27 and beyond. In this way, we can preserve our planet and secure a safe, healthy, and just future for those who come after us.